Happy New Year! Another year, another 12 months of Running Man awesomeness. So what is happening in the world of Running Man? Check out the headlines below. Cheers!

The cast and a plethora of guests (Jae Kyung from Rainbow, John Park, Kim Kyung Ho, Lee Dong Wook, Park Soo Hong, Song Kyung Ah, Sunggyu) take part in a mega travel cooking challenge. Who will become the best chef of them all? Check out the preview and official pics below:

Here are a few more goodies from the awards:

First, thank you to god and my family. I would like to express my thanks to King Kong Entertainment, the Running Man crew, producers, writer noonas, VJs, Suk Jin hyung, Jae Suk hyunk, Jong Kook hyung, Gary hyung, HaHa hyung, Ji Hyo noona and my friend, Joong ki, who is currently in the army. I saw your picture and you have become really ugly lately. And Lizzy my other Running Man family, I really love you all so much. I will repay you guys for the whole life. I love you all, thank you. I will try my best to bring laughter to people in 2014. Thank you. Happy New Year.

I have found the following subbed videos, credit to the original uploaders and subbers:

So you may have noticed that Ji Suk Jin mentioned losing his passport during the acceptance speech for the popularity award. Yeah, about that…

On December 29th (a day before the awards ceremony – eeek!) Big Nose Hyung posted the following on his twitter:

“I am at the airport in Vancouver, Canada, and I seem to have lost my passport. I have to attend the awards ceremony, but the embassy is closed today and tomorrow. I don’t know what to do. This is by far the most baffling situation I’ve experienced this year… What should I do? I already missed today’s flight. I can catch the flight tomorrow, but I don’t know if there is any way around this.”

Luckily everything worked out and Suk Jin could make it back. He tweeted the following, moments after his original post

“I got a call from the embassy. Looks like it’s going to work out”

Good thing everything worked out well, because his acceptance speech was daebak (he looked kind of confused in a hilarious way). 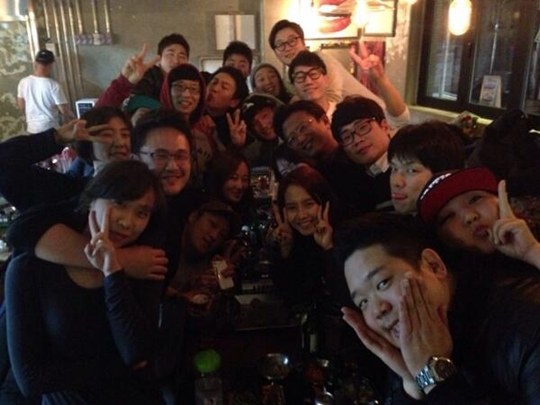 Kang Gary said goodbye to 2013 by tweeting a picture of the cast and crew of Running Man (well, most of them anyway) with the following words:

“You guys did such hard work running around so much this year! I feel like all the good people of the world are right here.”

Awwww! Awwwwwwww! Triple Awwwww! See who you can spot in the picture. Bonus if you recognize the PDs!

While not being busy being an extremely endearing and an all-around cool guy, Gary has been preparing for….get ready for it….get ready for it…a SOLO debut! I honestly did not see this one coming, considering the great dynamic that Gary and Gil have as LeeSsang. Granted this is not a breakup for LeeSsang or anything by any means, I guess I just never thought they would break off on their own. Regardless, I am highly anticipating Gary’s solo debut.

Gary spent New Year’s Day in the studio preparing, as evidenced by the following pic from his twitter with the words, “New Year’s Day, I am in the recording studio…it’s not bad”:

A representative for LeeSsang Company stated, “Gary will be leaving aside what he’s been showing as a member of LeeSsang to express his unique musical senses through this new album. The entire album has been produced by Gary himself, and he has collaborated with the other rookie hip-hop artists to present music with unique lyrics, which people of young generation can relate to”

Wait, did someone say a young generation party! Or not, but I had to remember the following from August of this past year (courtesy of Gary’s Twitter):

“I saw a shooting star. I made a wish. I wished that I would make 10 million dollars so I could make a crazy party culture for the young people”

Why do I still love this?! Gary’s album will hit stores on January 15th.

Kwang Soo left Korea for Malaysia on the 3rd in preparation for his January 4th fan meeting. The giraffe posted the following pic on his LINE, showing off his airport fashion:

And his landing? Look no further, here it be:

Asia’s Prince strikes again. Kwang Soo’s meeting will be held at the KWC Fashion Mall. Judging by his welcome at the airport I am guessing he will have a pretty good turnout. You can check out the Giraffe’s Fan Meeting promo video below:

Are there any Malaysian fans out there that will be attending? Let me know, because I am insanely jealous!