Another week, another amazing super fun drama discussion! Ekun and I seem to like Heard it Through the Grapevine a little more each week, and this week is no exception. Now if we could only figure out how to emulate Bom and get jewels for brutal honesty. Life goals.

Lore: So, important things first. Do you think Seo Bom will pass the civil exam while In Sang fails? And how funny would you find it?

ExtraKun: Girl! All things are possible, and unfortunately, this reality seems quite the realistic outcome. It is not that In Sang is not smart or couldn’t pass; it’s just that his focus and drive are different. The fact that Daddy Dick-tator has become smitten with Seo Bom is the best! It’s like he has secretly put all his eggs in her basket without realizing it.

Lore: I love Daddy Dick-tator’s newfound love of Seo Bom. I think I am probably as equally in love with the way Mommy Dick-tator is now terrified that In Sang will fail. I loved the ending of episode 8 when Mom couldn’t sleep because she was so worried about it. Another highlight in the last two episodes for me, in terms of plot development, was the terrifying revelation of In Sang’s fathers condition. I….I …..just couldn’t hold back the tears when it was revealed he would need a transplant.

ExtraKun: I share Daddy Dick’s fear of pain; I have a zero tolerance for it pain in general. But the fact that he is wigging  out over his hair is priceless! Just think of it this way: Now you really will seem like a Harobaji now that you have a grandchild. Something has to go no? LOL! But I tell you another thing, this friend in the gossip crew that is still upset with Daddy D’s mom for picking Yoon Hee (Mommy D) over her… Yeah, she needs to get her life, seriously! Why are you still mad at this wench? It has been a million years!

Lore: I agree, she needs to let it go. I admit to being surprised at the woman’s origins (daughter of a loan shark), I guess I didn’t see that coming given how high and mighty the gossip crew seem to view themselves. What I think the revelation really accomplished, which I think was desperately needed, is some insight into Mom and Dad Dick-tator’s relationship.

Mom kicking Dad out of the bedroom showed that despite her weak exterior (and interior, this woman should be asking for smelling salts the way she acts) she can put her foot down. Dad on the other hand is pretty much at a loss when he pisses his wife off, even having to beg her friend to apologize. For once he was weak and she was strong, showing another dimension to the marriage that we haven’t seen. In my opinion we need more moments like this if these two characters ever hope to become truly likeable.

ExtraKun: Did it make Mommy Dick likeable? I thought it was rather childish and hypocrital. She jumps down Bom’s throat for doing the same exact thing she was doing to her husband. While In Sang is her son, he is still a man with a wife and child. It is bound to happen that he will be in the “dog house” every once in a while. Her misplacing her anger on Bom was a no go as well; I simply love the fact that Bom is able to maneuver such tactics and come out with jewels in the end. Her honesty will be the thing that saves and condemns her. But I really do like her stance on being respectful, but speaking her mind. Not many daughter in laws do that enough.

Lore: I admit it, she is a hypocrite and she is childish. But I still stand by the fact it gave her character a little more depth, made her a little more real, and in my mind a bit more likeable. Overall though, the Dick-tators are extremely immature – which works because it contrasts In Sang and Seo Bom’s unexpected maturity (not to say they are never immature, but they do seem to have more common sense than Mom and Dad).

Seo Bom is a breath of fresh air. When she walked in on Mom hiding talismans and told her the family needs new traditions…yeah…I would have given her a high five if I could have! What are your thoughts on the scene towards the end of episode 8, where we were given a glimpse into what happened when Seo Bom told her family she was pregnant? I thought it was really emotional, raw, and touching. It showed off how close the Seo family is, with the hugs and the tears. The exact opposite of In Sang’s family.

ExtraKun: I thought it was finally good to see what happened before everyone was on board with “team baby Seo”! Momma Seo and Unni trying to take her to the clinic (and not for a check up…), Daddy Seo about to beat her ass for being pregnant and ruining her future… Isn’t it a standard range of emotion from parents around the world in this predicament? You are not excited your kid is having a kid, (especially in the Seo’s case where mom did the same thing with being pregnant with the oldest daughter before marriage), you feel in some ways you failed as a parent, your child has ruined their life (especially if she is the girl), but you love them and know that it is not the life inside of her fault. What else can you do but cry, hug, and give a few pops?

Lore: Yeah, it isn’t like they are all going to jump for joy. Teenage pregnancy is an issue that few parents probably react to with happiness. The Seo’s reaction seemed genuine, but still showed how much they love their child. It was a touching scene overall.

ExtraKun: It was very touching and emotional. Heck, I can’t blame the Dick-tators for their instant reaction– the girl had the baby on their bed in their room! But everything after that was totally grave digging, foot in mouth inserting, out of control spinning foolishness. Ssssssooooooo did Daddy Dick “blackball” Unni from getting the job? He seems to be dealing out a lot of poisons and remedies these days– I didn’t think he would go that far given she was already likely to get it… 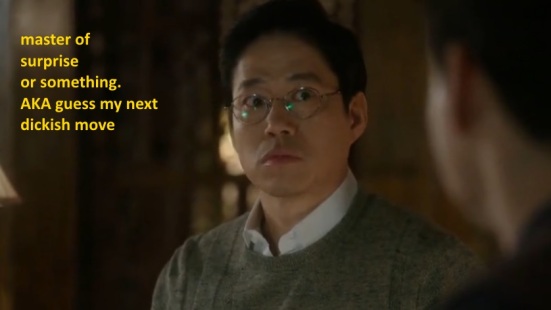 Lore: I don’t think he would go that far either, but then again the man seems to do a lot of things I wouldn’t initially think he would do. I guess time will tell…or another episode.

ExtraKun: Anything else we need to discuss before the final thoughts?

Lore: I don’t think so. Show – I continue to like you. Staff- I continue to want to be your friend. Seo Bom, In Sang, Dicktators – Who are the parents and who are the children here? Cause age sure is not indicative as EKun pointed out. The Seo’s- Still a fan, major fan. Gossip Crew- Build a bridge and get over it.

ExtraKun: Gossip Crew: Ugh, can you all please get a life? Preferable, ones away from each other. In Sang: She made you sleep on the couch, but she still loves you. Bom: I like you more and more each episode– don’t crush ExtraKun Unni’s dream of liking you until the end. I guess I am putting all my eggs in your basket too– bian. Dick-tator: *Sigh*. Staffers: How I wish a sista could have gotten an e-vite to the after work drinking party… I am usually trying to sleep that late, but you all I can make an exception! Next time, next time.

2 thoughts on “Super Fun Drama Chat Time: Heard it Through the Grapevine Eps (7-8)”