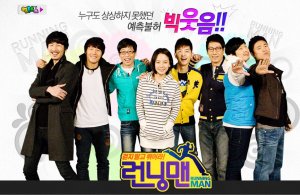 I have been in a Running Man mood for a few days now. I love the way Korean Variety Shows structure creatively torturous missions, endearing entertainers, and awesome camaraderie into entertaining and hilarious episodes. Running Man, in particular, makes me one happy girl. As I viewed the comic delight of RM, I began to think. And then laugh at the Giraffe. And then scream at the Tiger. And then realize that the awesomeness of this show taught me a few things, like when to run and how Velcro lasts only so long. 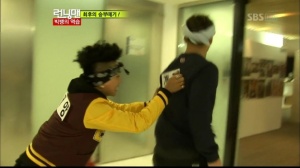 For some reason this life lesson, which I am 1000% certain is correct has gotten me banned from most restaurants, all of the grocery stores in my city, and 75% of the national parks in my area.

Trust no one. Especially each other. And the guests. And the PD. Hell-suspect your mother also.

The best parts of this show are the offhand commentary of the cast. Talk- damn you! Ramble on!

I am known as the sloth around my house. Take a guess.

5. The more guests the better.

Invite ten people over. You will have way more fun than inviting 1. The more divided a team becomes the more hilariously they perform.

I seriously like this idea. A lot more than poor product placement.

8.Never trust Maknae FD. If you see him, run the other way.

I love, love Maknae FD. And that is why I would never, ever trust him.

9. If I ever- and I mean EVER- go down a hallway and see Jong kook on the other end I will turn around, scream like a baby and flail my arms towards an epic escape. Let’s hope I do not meet him after a long walk on a pier.

That man scares me. Scares me in a- I would really like to have coffee with you sometime, but  not after you chase me down a hallway with an evil glint in your eyes way.

10. At some point you will need to: act, dance, sing, carry someone, shoot a water gun, play hide and seek, wear a bell, rip a name tag, accidentally injure someone, run, run while doing any of the aforementioned, spend too long in water trying to throw someone, failing at throwing someone, and spend awful times at theme parks.And that is why I love this show.