Though we were away last week, we are back with more fun, tears, and table throwing! I am not sure about you all, but every week Heard it Through the Grapevine gets better and better–and my tears are more and more from laughter, rather than pain. While the crazy painful stuff is as certain death to all living things; lets discuss and enjoy the fun moments while we can! 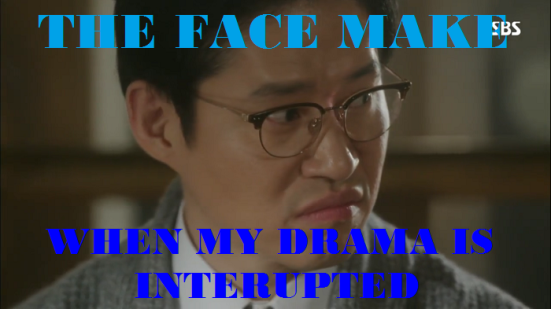 Ekun: Lore Unni! How can I express how much I love In Sang these past 2 weeks? A poem? Bake cookies? Send a check to the writer?

Lore: A tattoo? Maybe kidnap In Sang…I mean, that is just crazy talk. Sky writing? I am right there with you. In Sang is a great character. I have to admit that I am a pretty big fan of Seo Bom as well. This show has some great casting.

Ekun: Totally, even though the Dick-tators (In sang’s Parents) are trying to maintain control, Bom and In Sang are making their demands known and not going down without a fight. You cannot ask for more than that from them being in a crazy situation such as theirs. Realistically, the Dick-tators are the the only ones in the position to really provide for the new arrival to the family. But their sense of logic is all sorts of skewed! Which makes it hilarious when it all comes crashing down around them. 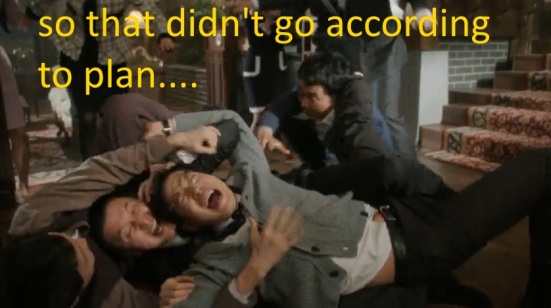 Lore: So true. In the last four episodes, our Dick-tators have done whatever they could (well, whatever they could do on the down low, because they had to keep everything a secret up until episode 5/6) to keep the family under their control and away from each other. They are the only ones in this story that have financial means and can really help, yet they are using their financial means as leverage to get what they want. Kind of… like every other Kdrama out there. The big difference however, is that in this story the evil rich parents don’t really get to meddle for long because they inevitably screw up their own evil plans themselves!

Ekun: They do have a tendency to shoot themselves in the foot more often than naught. I love how daddy is always, “We will beat this with generosity and intelligence!” But it seems to me, you are doing everything but! Nice-nasty is what you are… and Dick- tators.

Lore: Ha! I love Dad and his approach to his plans. I just about died at the end of episode 6 when he finally freaked out and lunged at In Sang. It was hilarious that with all of his focus on coming off as the super formal, super educated, supercouple in the “parents meet parents” breakfast, he lost it like that! Because in the end, he came off as embarrassing and In Sang called him out on it. That moment was priceless. It made me love this show more, and I seem to feel like that episode after episode – I have a smile on my face and even more appreciation for the writer as each hour goes by.

Ekun: I agree. Let’s discuss the other side of the spectrum- Seo Bom’s parents. I love that they are not delusional of their situation and that they use everything they have to put their best foot forward. They continually want to ask for help, but refuse to do so on the account of Bom. That is kinda bomb. And to think, if the Dick-tators waited for the Seo’s to ask for things, they would have the upperhand. Just sayin’…

Lore: I completely agree. If In Sang’s parents waited for Bom’s parents to ask for favors, then they would be able to leverage that fact in the relationship. I think the great thing is that Bom’s parents have too much pride to ask for anything (well, her Mom any way). And honestly it would be hard not to ask for something, especially when one of your children is coming home in tears because her economic status is keeping her unemployed.

Okay- so can I get something off my chest? The only thing about this show so far that has annoyed me? I hated it when In Sang asked Seo Bom to stay at his house when he knew she was miserable there. In hindsight, it didn’t’ matter because they ended up married and living together there. But before that, when he was going to return to his tutor, he pretty much tried to guilt her into staying there by herself. That bothered me for some reason.

Ekun: It should have bothered you, but I counted as his way of knowing that 1. She just had a baby and can’t really do too much. 2. A way to stay as close as possible. And 3. There was no way his parents were going to let her and the child go. In Sang is not completely naive to his parents ways, but I think he is ever hopeful that is wrong.

Lore: I think it has a lot to do with his inability to really, truly rebel. Not when there is a chance he can sway his parents way of thinking in any way. He knew they would want the baby close and he didn’t want to lose Bom. Still, the girl was miserable. It made me not like In Sang just a little bit, thankfully that was quickly resolved as the story progressed.

Ekun: You have a point, but that all came to a halt with the thanks of some pretty great people, and my favorites, The Staffers! You have In Sang’s Teacher, the Butler and his wife, mom and dad’s Secretaries, and daddy’s staff at the office! These people are the total comic relief besides the insanity of the Dick- tators. While they are asked to do all sorts of off the wall stuff, they seem to be the foreshadowing group that says and thinks the things we the audience might say to the TV. I love it. 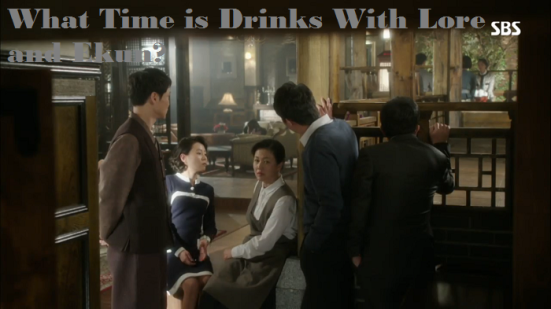 Lore: I get a major Upstairs / Downstairs or Downton Abbey vibes from the way the staff is portrayed in this show. I love it too, because I am not quite sure I have ever seen staff portrayed as such in Korean dramas (sometimes we get the funny maid or great teacher, but to see the staff as a whole be the voice of reason feels rare). What do you think of In Sang’s Mothers friends (the gossip crew as I like to refer to them as)?

Ekun: I am really unnerved by them because I do not quite understand them. One is totally a bitch who only like to feed on other’s misfortune (as mom pointed out this week). One seems to just go with the flow, and for some reason; I got the feeling that the only cock in the henhouse liked mom… Did I get that wrong? They truly are an exhausting bunch to watch and in every sense of the word define “frienemies” (and I hate that word).

Lore: I get the feeling Mr. Gossip Boy liked Mom too, and that will come to a head later on in the story. Especially since it was revealed that her husband likes a little something something on the side…

Ekun: Oh for realz?! Did I miss that? I didn’t think he would do something like that, but given his nice- nasty way of life it is not impossible.

Lore: Now you are making me question if I heard that right (since you are always more hyper aware of what is going on, since I have that bad play with my cell phone while watching dramas habit). I think that was the reason Mom’s friends were theorizing the baby was actually a love child from In Sang’s Dad and his mistress, and that In Sang’s Mom had to raise it to save face.

Ekun: I play with my phone sometimes when I watch dramas or walk away because I can still hear, but let me look since I have it up right now. *Pops off to find the scene* Okay, so it does look like daddy likes to drink and keep women as company. This also builds hostility from Mr. Gossip Boy; for he was around for the shenanigans but never outright told mom because it would be futile. Good one Lore Unni!

Lore: I suddenly feel accomplished for having noticed that *pats self on back*. And you understand more of what they say than I do, even after how many dramas I still rely heavily on subs (stupid phone habit for making me miss stuff!). The gossip crew are definitely going to cause trouble, but I suppose that is the whole point of their characters. The show is called Heard it Through the Grapevine, ne?

Ekun: Exactly, and everything is heard through the Grapevine. Good news, bad news, and outright gossip. Anything else before we wrap it up?

Lore: I don’t think so. Parting thoughts- In Sang and Seo Bom, love you kids, keep making things work and knock some more sense into those around you. Dick-tators, you make me laugh. Keep up the lolz. The Seo’s, I like that you like yourselves enough not to come begging. Kuddos to you. Staff- We should hang out sometime. You know, get a drink, talk shit about people, it would be fun. Gossip crew- I would tell you to stop but you kind of make the story move forward, so…um…keep up the good work, I guess…..

Ekun: In Sang… I know you are only 17 or 18, if things don’t work out with Bom (Which I sincerely hope they do) give noona a call once you turn 20. Bom: Fight the good fight, and do not get weary. Unfortunately, this is the tip of the iceberg.  Dick- tators: Momma’s crying is annoying, but daddy’s is priceless. And just the fact that you threw a tray like table at In Sang made me like you a little bit more dad (I’m a mess huh?)! Seo’s: It will get better, continue to hold your head high. Staffers: I am all about that drink that Lore mentioned. I know some of you get off late, but I think we can make it work. Gossip Crew: Not even in the mood with you. Until next week, stay classy (unlike daddy)! Peace!

One thought on “Super Fun Drama Chat Time: Heard it Through the Grapevine Eps (3-6)”