I am horrible with the live stream. Seriously – I seem to have some kind of mental block against time zones. And dates. Ah, who am I kidding – I still can’t remember the names of half the people I meet! In other words, I had some catching up to do when it came to the recent end of the year awards ceremonies (largely because I wake up, see a live stream post, and then think “wasn’t that airing tomorrow? aish”). I caught up, and I gots some things to say. Cheers!

Dad Where are you going took home the Daesang (Grand award) and I am cool with that. Going up against shows like We Got Married, Infinity Challenge, and Real Men spells tough competition (well, excluding WGM). DWAWG deserves the award because of the breakthrough this show made in MBC’s lineup – in other words these adorable kids made this stations Sunday night watchable again. If I were MBC I would give them an award too.

Yoo Jae Suk did not win the Daesang award, the honor went to DWAWG. But never fear, because the nation’s MC has won a Daesang from one of the major networks every year since 2005. In MBC’s case he won in 2006, 2007, 2009, and 2010. I am hoping that the grasshopper does not break his winning streak and receives the Daesang award at SBS’s Year End Entertainment Awards. Please, pretty please (because KBS also did not give him the award). 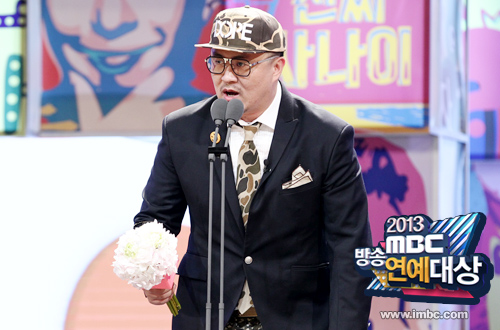 Defconn won a popularity award, which is great because I have always thought this guy has underrated variety talent. Having played Conni to Hyung Don’s Donni every Wednesday on MBC1’s Weekly Idol, this guy knows how to work it. Plus, he was great in I Live Alone. Just don’t ask him to take off his glasses. Really, I beg of you.

Park Mi Sun took home the Female Top Excellence Award – well deserved in my opinion. She is an MC I never tire of. This woman knows comedic timing in and out, and I love her for it.

Choo Sung Hoon ninja’d up a Top Entertainer Award, but after watching Superman is Back (Sarang is too adorable to exist) I get it.

Kim Joon Ho took home the Daesang, which is not really surprising given how much he has contributed to the world of KBS variety shows (Gag Concert, Human Condition, 1N2D). Our Neighborhood Arts and Physical Education won several awards, including best teamwork. Once again I will remind myself to watch this show. I hear good things but I always forget. And Yoo Jae Suk lost out on the Daesang…SBS? Are you there? Seriously!

Troublemaker performed, and Hyunseung made it painfully obvious he still cannot work out his facial expressions in a satisfactory manner

And that is all I have to say about that.

Were the camera guys too enamored in the presence of Exo they forgot how to focus?! Or was it Hyori? Maybe A Pink, or B1A4?! Who the heck knows but this was some shoddy camera work. There were some good performances, however the special stages were far from epic (which sucks, because that is what I was looking forward to).

I love me some hip hop collabs, but at this point I was pondering how dizzy I would be on that rotating stage…

CL and Hyori were amazing, but honestly I expected these two to knock it out of the park.

Exo is getting a lot of hate for popping up everywhere (it is like a game- find Exo in the shot, because they are there. THEY ARE THERE, TRUST ME). Still, love these boys.

When I see a member of Big Bang I smile. Kind of an automatic response. Lore happy.

The drama parodies. I am completely okay with this. Can they put out twenty episodes?! Please!

Here are the time and dates, which I will promptly forget: