I wish I could say that all good things must come to an end but in the case of God’s Gift 14 Days I just can’t. While I did not dislike this show, the last half (and the finale) left a lot to be desired in terms of logic and tight storytelling. Yep, here comes the ramble. Cheers!

First Impressions post and details on the premise here.

A Mystery so good

Back in the day, when this show was intriguing and made sense (insomuch that the plot twists were supported by some kind of logic), I loved it. The clues and twists and turns were thrilling to watch and left me at the edge of my seat. I found myself wondering how I did not pick up on certain clues, why I did not see that certain characters were culprits. I madly anticipated what the story would do next. So long ago, it seems…

I have come to the conclusion I have a crush on Lee Bo Young’s acting. I am not sure if that is a thing, but I have decided it is because I love everything I have ever seen her in. Bo Young knocked it out of the park with her portrayal of a Mother out to save her daughter; she was so solid in her portrayal of the character that in my opinion she was the highlight of the entire show. Is my crush showing? Maybe.

A Mystery so mysteriously nonsensical no one cares anymore

Sigh. It is always disappointing when I look back at a drama and realize that what was once a strong point for the show became a weak point with the passing of episodes. This show had a lot going for it, the setup was solid and the plot intriguing. What disappointed me was episode 10 (or maybe 9, heck somewhere in the middle) onward. The story, which I knew would be a twisty-turny devil by nature, became so convoluted that it no longer became interesting. In fact it became frustrating.

No longer was I tuning in because the plot twists were the kind of “Wow- how did I not pick up on the clues?!” but instead I was left with “Wait…there is another random murderer?! And he killed so and so and that caused the victim’s (Mom, wife, cousin, Dad, baby sitter, hairdresser, insert random person) to seek revenge. But then they were blackmailed, but then someone else was murdered which leads us to a random shop where there is another murderer? Which leads us to the larger plot of ….um…wait, what in the heck is going on? What was the plot? Why is everyone a murderer? Why are murderers being murdered? What happened to the girl? How does this even make sense? SO /CONFUSED…..”

Or in more realistic terms this was me watching the show (with less mud and not wearing a tracksuit and a beanie):

There is a fine line between being clever and making sense, and this show blurred that line and spiked it right into the realm of WTF-ery (yes, I attempted to make a word out of text slang. I will slap myself as punishment).

The final episode was a disappointment. The open ending- did Ahjussi live or did he die – was a cop out. God’s Gift was a story about fate and second chances. Dong Chan played the part of the unlikely hero struggling against a fate greater than the sum of his redeeming actions -so I was prepared for him to possibly die at the end. I was not prepared for a show that emphasized the fight against fate to leave viewers with such a huge unresolved question regarding the male lead, especially given the fact that such a question of his fate and his true reasoning was all thrown at us in the last ten minutes of the drama. 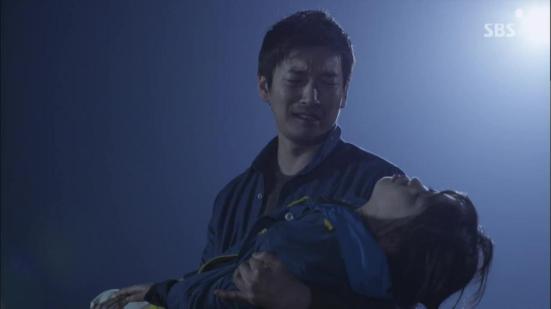 The last episode felt slapped together; answers to open questions were explained haphazardly and in a rushed manner. After sixteen episodes of plot twists and whodunits the ending was not satisfying, it was like a slap in the face. As all of the threads of unknown motivations and reality joined we were left with something that was less than satisfactory (or logical) given the earlier intricacies that the show threw at us. To top it off, these answers made little sense given the evidence that we had seen. I mean, there were clues (we knew the president was involved somehow, we knew that there was something with Dong Chan and blackouts), but the nice neat bow the show tried to give viewers at the end was not on par with the type of clues we had seen up to that point. Oh, and they forgot the nice neat bow on one of the main character’s fate. Of course this is just my perception, but you can color me disappointed.

So what did you think of the finale? Happy, confused, indifferent? Did it make sense to you? Let us know in the comments!