There is something about dedication that gets me fist-pumping and cheering. Shi Kyng, with all of his loyalty and do-gooding made my positively ache, all that pumping takes a lot out of the average k-drama fan Let’s celebrate everyone’s favorite royal bodyguard, Shi Kyng. 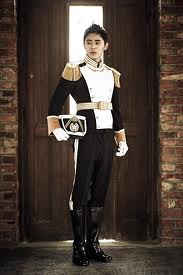 A character that brings me heartbreak at every turn. A character that makes it real, even when the plot takes that unreal James-Bond-like turn when everything and everyone is unbelievable, Shi-kyung is there leading the march towards what normal could be in the universe of King 2 Hearts.

This character was faced with the die hard plot point of loyalty. Follow the father that made horrible mistakes? Follow the King that met you as a beyond lazy prince? Only a strong man could make such a decision and base it on the rights and wrongs of the country, all while displaying a bleeding heart and a nobleness that is next to impossible to match.

In the end we witnessed what it means to be a protector. This character paid a price for what he believed in. He paid a price in a bittersweet way. His situation was made all the worse (and better, if you consider the viewers POV) by his connection with a certain amnesiac princess- his situation was more precarious because everyone really wanted to see them happy together. Yet Jung Suk did what was expected of his character, the noble act of protection. For self sacrifice, for perfecting a perfect role, for what could have been- for all of that I salute him. A great character indeed.