So which scenes should be erased entirely? Well, none, but there are plenty that need to be poorly photoshopped. Shady Suk maybe got what was coming to her, there was a “you are my daddy” revelation worthy of Maury Povich, and E-Kun and I talk about how we would have responded to Tae Il’s confession. These and other amazing things in this week’s edition of Super Fun Drama Chat Time. Cheers! 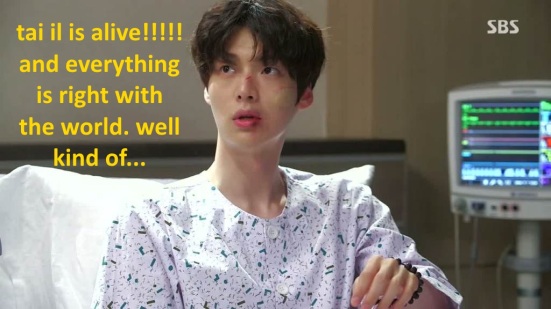 Lore: TAE IL IS ALIVE! Thank goodness because I was going to have to cut a b**** if he died. Not like I am super attached or anything. Nope.

E-Kun: Look, I was just mad he was laying up in the hospital bed! But you know what? These 2 episodes were called “Erase and Replace” in my book! There were so many scene’s we needed to erase people and insert Lore and E-kun! Don’t you agree?

E-Kun: Anytime Tae Il was being nursed back to health…. Erase DG and JG and replace!

E-Kun: Since you are a fan of Seung Gi, we needed to erase Go Ara when she unbuttoned his top and replace her with you!

E-Kun: And I think we need to erase Seung Gi and Go Ara out of that scene, and replace it with Che Seung Won and me! Problem, what problem?! 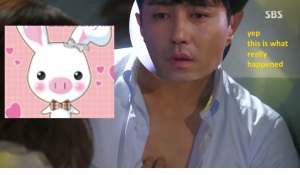 Lore: Well, I don’t think after unbuttoning Lee Seung Gi’s shirt I am going to slap a Band-Aid on him and then sit demurely in embarrassment. In fact I am pretty sure LSG will be taking out a restraining order after I maul him. Wait- that isn’t really a problem! I mean, it is for him not for me. Restraining order shesmazing order. Okay, carry on.

E-Kun: LOL! See. Crisis adverted! Let’s really talk about the episodes now. Bag Lady Bi*** steals the necklace back from our group- Stupid move if you ask me. Didn’t it just incriminate her even more?

Lore: Everything this chick does is stupid, strategic planning is definitely not her strong suit. When our detectives analyzed her personality to see what actions set her off it was pretty clear she doesn’t think things through and just kind of goes where her rage takes her…which is to a mental institution apparently.

E-Kun: I was like, “Daddy Assemblyman!!! You are really sending your own kid to the nut house to protect your image?!”

Lore: Can we talk about her son for a moment? When he grabbed Dae Gu’s hair to get his attention I wanted to slap the kid. Something tells me he inherited his temperament from his Mom.

E-Kun: Oh little brother/son is emotional, but he was only making a scene to grab his hair to do a DNA test. He isn’t all that upset, I think he has known something for a minute or two.

Lore: True, it was for a DNA test. But the kid still strikes me as a little off his rocker. Regarding purse slinging daughter being carted off to an institution- I can believe Assemblyman Yoo would do something like this. The guy is definitely lacking in the “people are people not stepping stones” department. She was a hurdle to him, he did what he thought would fix the problem and have the best outcome for himself. Selfish jerk. But then again his daughter is a total psycho and needs to be locked up. Maybe not in a mental institution but in a prison.

E-Kun: She needs to go to prison. The only reason she is crazy and on a power trip is because Daddy did not discipline her enough as a child or something. Anyway, Bag Lady Bi*** husband wants to be Dae Gu’s daddy or not? Thoughts? Then we can discuss this band-aide foolishness

Lore: That is a great question. It seems that Papa is on the fence – struggling with his life in the Yoo family and the realization he had a son he did not know about. In my mind it is kind of late for the guy to “Dad” up.

E-Kun: You are right, and Dae Gu is not interested. I was proud of him for saying, “too little, too late” to potential pops. But I have to admit, I was kind of annoyed about this “I need consolation” bit. This is why I did not want the two of them together so soon; it has kind of diminished Soo Sun’s character into nothing more than the “girlfriend” role. Maybe I am just reading too much into it, but I didn’t like it.

Lore: I think that Dae Gu has the worse luck ever (dead Mom, dead and betraying mentor, secret Dad married to Mom’s murderer). This guy has a lot to take on, and the majority of it happened in a short amount of time. Dae Gu’s emotional state does kind of pigeonhole Soo Sun’s screen time into the role of the shoulder to cry on, but I am honestly okay with that. Because without Soo Sun I think Dae Gu would have it that much worse. If anything this strengthens their relationship- getting through such hard times together. It also shows how much they mean to each other. Dae Gu letting Soo Sun in and Soo Sun always willing to comfort Dae Gu when he needs it. Soo Soon’s character, I feel, was fleshed out pretty well in the show. I think the last story arc with her Mom only added onto her already strong and determined character. Or maybe I just like these two together because it results in Lee Seung Gi’s shirt being unbuttoned (rawr). Either one is possible.

E-Kun: LOL! Well let’s just call it two sides of the same coin. I agree with you for the most part, but I feel insulted deep down as well. Like, Soo Sun was this character I felt had so much potential to be more. But she is pigeonholed by Dae Gu and all his baggage. Perhaps I wanted more from Soo Sun’s character than the show ever intended to deliver. I am willing to admit that. What else happened? We find out how Tae Il’s hyung dies…

Lore: That was sad! It was great to finally hear Tae Il’s backstory, but I could not help but think the whole revelation scene was a little weird. So your friend just admits this heart wrenching past event and your response “Let’s eat melon” Ohhhkay. I mean, I get that his friends were basically saying everything was okay, they supported him, they were thankful that he confided in them, but it….was weird. Maybe I think this because I would have reacted much more like “What! Pops is kind of a jerk! I am so sorry your brother died, I am sure he would not hate you.” *Hugs* (Oh, and while Tae Il did seem like he didn’t want to dwell on it I still would not have said “Melon time!”).

E-Kun: I think it’s hard what to say in situations like that. Sometimes, being normal and keeping it moving is the best thing a friend can do. Tae Il still seems to be confused and unsettled with the way things went down. Passing judgment on his brother, parents, etc. could have caused more of a stir than offer consolation and understanding. When Tae Il is really ready to “deal” with the situation, at least he know he has friends to listen and help him get through it. But the melons… because I hate them with a passion was weird. Erase the melons and replace with an ice cream cake!

Lore: Good point! Aw, you are such a good friend! I guess it was just weird to me (because I never keep my mouth shut, and would never have been able to which can be good or bad as I know well). So what else happened this week?

E-Kun: McBoots… was killed. *tear, tear*… and Shady Suk was finally found out by Dae Gu. She straight used him this whole time. She said she was fond of him, but she totally sucks! He was so her backup to press Yoo’s back against the wall when push came to shove!

Lore: When Dae Gu confronted Shady Suk I did a little happy dance. He needed to find out the truth and it came none too soon. She used him and then tried to explain everything with her screwed up logic. I couldn’t believe when she said “Now that you are a detective you understand, right?” Um, how about no.

E-Kun: Exactly! The only reason you took me in was for this nonsensical reason! And look, assemblyman Yoo lied to you like you were his imagination on a hot day in a tropical forest without water for days seeing streams of clean water when it is really snake spit!

Lore: Yes! Dae Gu was used by Shady Suk, she was used by Assemblyman Yoo. Now we have two episodes left for Assemblyman Yoo to get his just desserts, since Suk received hers in the form of a killer truck at the end of episode 18.

E-Kun: Yes, Lord knows I do not wish death upon anyone, but I was not sad that she got hit…

Lore: Yeah, I mean I didn’t think she deserved to die but her death was…well…for lack of a better way to put it the end to her scheming (which is a good thing). I would have rather seen her go to prison for a while, maybe even share a cell with our purse slinging crazy.

E-Kun: We all knew it was coming and that is why I was like “oh well…” when it did. She did get what she deserved. Prison would have been cool, but death becomes her.

Lore: Nicely said. With only 2 episodes left what do you hope happens? Any predictions?

E-Kun: Honestly, now that we know the reason for Dae Gu’s mother death and Tae Il is still alive, the show has lost its luster for me personally– I do not really care what goes down as long as it is consistent with the overall storyline. 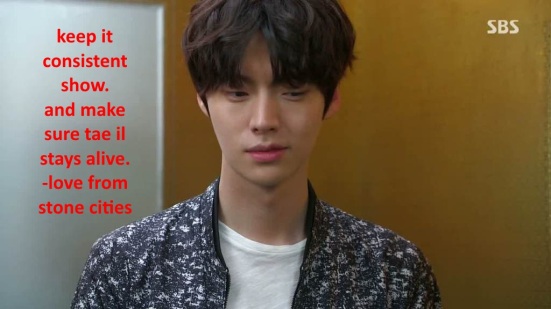 Lore: I agree. It is fairly predictable in that Assemblyman Yoo will be taken down and our family of cops will probably have a happy ending (hopefully no one else dies). Our mysteries have been solved, pocket Tae Il is safe and sound. I am not expecting anything amazing or shocking to occur. Final thoughts?

E-Kun: Show, it has been a good ride, but honestly this could have ended in 16 episodes. Just saying….

Lore: Show: What Eboni said. Oh, and the finale should have a shirtless Lee Seung Gi. I am okay with a shower scene, or just him walking around shirtless for the entire episode. Love- Lore.