I am going to miss this one. JTBC’s Monday / Tuesday noona romance-melo-awesomeness Secret Love Affair aired its final episode this past week and I am going to need some recovery time. If it is not already apparent, I really enjoyed this drama. I really, really, really liked it. Maybe I loved it. Sigh. Which is why I am rambling. Imagine when I get to the actual review. Insert random picture of Yoo Ah In:

For a look at the series halfway through check out this post.

Yoo Ah In as Lee Sun Jae and Kim Hee Ae as Oh Hye Won nailed it. I believed in the story they were trying to tell and I fell in love with their characters. While Sun Jae and Hye Won were engaging in less than…um…morally upright behavior they were able to make me give a damn about them, which is an amazing feat. Both actors played a big part in humanizing the otherwise socially unacceptable subject of an extra-marital affair, and for that I applaud them. While they did not make me come out of the show thinking that having an affair is in any way “right” (which in the end I do not think was the message of the drama to begin with) I felt like I was able to understand how their characters came to that place and time in their lives. Which, if portrayed by a lesser set of actors, could have been a complete s***show, pardon my asterisked French. 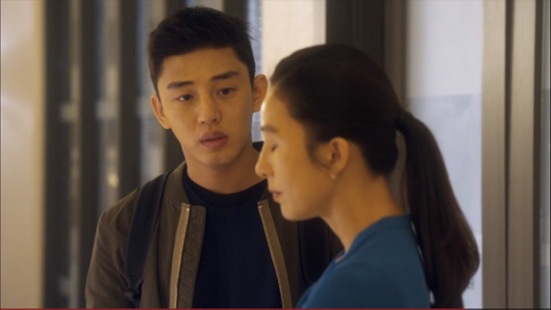 It also didn’t hurt that they had amazing chemistry. This is the first drama I have watched with that big of an age gap between the leads, yet it did not freak me out one bit. Okay, maybe at first but I was over it as soon as I watched Hye Won fall in love with Sun Jae over music. By the end of the series I was rooting for them to be together, love affair be damned.

The word of the day drama

Deep. Yep, I am going there. To me this drama was deep. It was mature and it was deep. The plot was deep, the aura of each scene was deep. The ending (god bless the ending) was deep. It was just….deep (quick- drink every time I write deep, you will be drunk before this review is over). Secret Love Affair is the type of story that begs for viewers to analyze and dissect the deeper meaning (or meanings) behind the entire story, individual scenes, and character motivations. Seriously, it was hard to watch this show and not find subconscious meaning as the scenes unfolded. When you have such strongly written lead characters you can’t help but try to understand them, and when the show consistently delivers on their character growth in a tantalizing way you can’t help but try to keep up with their evolution and the truth behind it.

One scene comes to mind when I associate the word “deep” with this show, and that is the moving few minutes when Hye Won and Sun Jae listened to Billy Jeol’s Piano Man- all of it. Yep, there was a scene that consisted of two character’s listening to a song. And they just sat there. But it was so much more. Which says something, because if another drama had done this I would have yawned, checked my phone, picked up my Rubik’s cube, looked out the window a couple of times (can you tell I am easily distracted) and then sat back down. But this scene had me nearly in tears, eyes glued to the screen. It was….drumroll please….deep.

On a side note- The direction (An Pan Seok) and the writing (Jung Sung Joo) deserve a standing ovation, because in the end they drove the “deep”. Kudos to both of you, I will be paying attention to your future work without a doubt.

Okay, this point may be unpopular but I felt like the supporting cast had zero character growth. Zilch. They pretty much acted the same way from the start of the program to the finish (well, maybe Da Mi is an exception). While our leads loved and learned, the rest of the cast plodded along committing their scheming acts and making their desperate decisions. I would have liked to have seen at least one other character show some growth, but they didn’t. At least that was my perception. I am going to assume jail time will shove a few of them towards some life lessons, but I would have liked to have seen a little bit of maturity picked up in the lead up to prosecution. But hey, maybe that was the point. Hye Won and Sun Jae exist in a world where no one else changes but them. Do you see how I am trying to make a bad point a good one? See, I am digging deeper again. Aish…. I love this show too much.

So what did you think? Loved it, hated it? Let me know – we can always agree to disagree. Cheers.