D-0. Two Weeks, MBC’s Wednesday / Thursday action drama ended on September 26th, proving once and for all that even good looking guys like Lee Joon Ki can have the worst days ever. Kidding aside, Two Weeks was a thrilling, edge of your seat show with a lot going for it (did I mention Lee Joon Ki?!) Now that the harrowing tale of Tae San has come to an end, it is review time. Cheers! 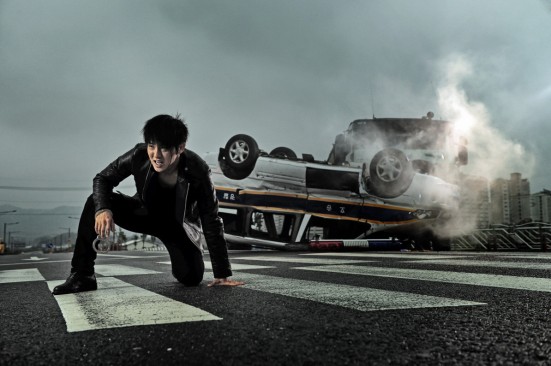 To be lazy, I will paraphrase what I wrote for the mid-series review:

The story of Two Weeks details a two week period of time (get it, huh, clever title!) in which Tae San (Lee Joon Ki), an all-around D-bag, is a fugitive from the law. At stake is not only his freedom and life, but also the life of his daughter. Tae San is set to donate bone marrow to the daughter he only recently learned of. Tragically his daughter is stricken with Leukemia and desperately needs a bone marrow transplant in order to live. If Tae San cannot make it to the hospital in time to donate his daughter will die (due to preoperational radiation treatments that leave her with a zero percent immunity to disease and infection, her life saving surgery is two weeks from when Tae San is arrested). To make matters worse Tae San is being hunted not only by the police but also by a Mob boss and his assassin son.

Two Weeks knew how to keep the action going. Every episode had a cliff hanger more unnerving than the last, and the entire idea of a man running from the law and the mob made for some tense and eventful twists and turns. Becoming engaged in the story of Two Weeks is easy, when this much action and possibilities for life changing failure are thrown out it is hard not to pay attention. The good guys, the bad guys, and the in between guys kept this story moving with their individual motivations and violent actions. If you like being at the edge of your seat and biting your nails, than Two Weeks is the drama for you. 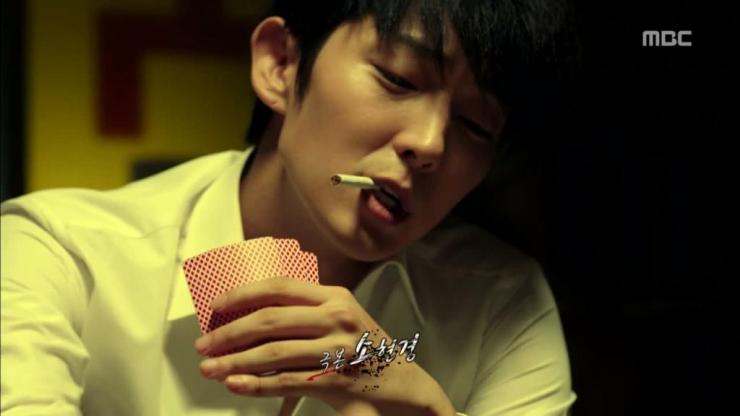 Anti-heroes are always on shaky ground. After all, they are anti-heroes, the guys that are despicable, morally bankrupt, or just plain unlike a hero…and we are supposed to root for them when it comes time for a story like Two Weeks. It is easy for this type of role to be written into a messy stereotyped corner or made into a facade of an interesting character, but I did not feel this with Two Weeks. Tae San, as the man himself admitted, lived his life as scum. He made horrible choices, and his horrible choices did not make him into a better “I learned from my mistakes” kind of guy. That is, until his daughter came into the picture.

Tae San, with the knowledge of his daughter, finally found the purpose and drive to let out the inner nice guy that was hiding within him all along. This character, with his horrible upbringing (I mean, come on, his Mom committed suicide on his birthday) and horrible track record (taking the fall for a mob boss twice, no less) was able to make serious steps towards reforming his past behavior – and it was believable. Tae San’s character, his growth and self-realization, is one of Two Week’s strong points.

I agree and disagree with Lore Unnie. I think that Tae San was always the nice guy who just didn’t care. There is a difference of being a “bad guy” and being a bad guy. Tae San never thought that he was worthy enough to make other choices than the choices he made. The fact that his daughter sincerely needed him was a life altering event that I hear most people go through once they have a child. Now his life has significance and meaning. Tae San made poor choices and lived like a “bad guy” but he never was a bad guy. 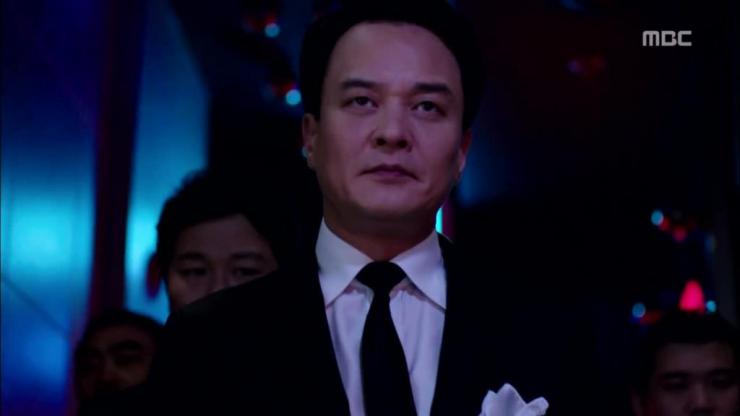 Jo Min Ki and Kim Hye Ok chemistry as a duo of baddies was electric shock! I could not think of another evil pairing that can hold a candle to what these two actors brought to their characters in 2013. I would be amidst if I neglected to mention Song Jae Rim as our neighborhood Professor Kim/ Assassin. His performance as a broken borderline psychotic killer made the show more enjoyable all around. Honestly, at the end of the show I was more intrigued a burdened by what happened to him than the main point of the story. To be stolen away from your dad by his enemy and raised as his son is a total mess! Loved the little tid bits this show gave us in this regard. 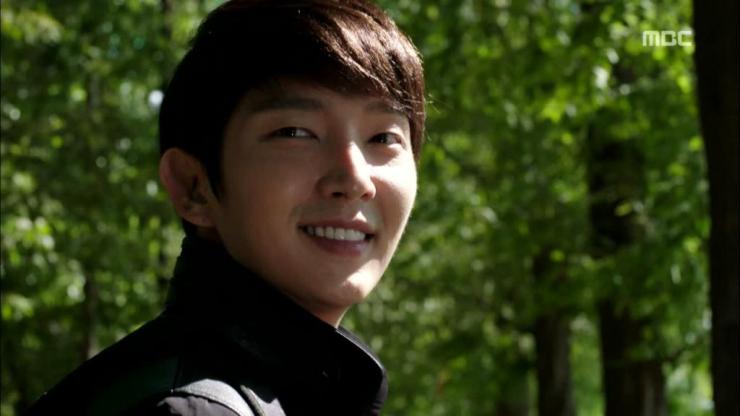 If this show had ended with Tae San, In Hye, and Soo Jin holding hands and skipping off into the sunset I would not have been happy. Why, you ask. Well, a family and their relationship to each other is something that takes time (in my opinion). Tae San just appeared on the scene and in the lives of In Hye and Soo Jin, so it makes sense that he needs to work on things and build up his relationship before this trio becomes a happy nuclear family. Time is needed to make memories (that do not involve kidnapping and Mob bosses) and time is needed for this family to figure each other out and how they fit together as a whole. That is why I was actually happy to see Two Week’s end the way it did, with the unknown of how or if this family decided to become one big happy…well, you know.

At first I was like WTH! But after I thought about it, the ending was much more suitable than a packaged bow ending. A minster once told me that time is gift given from God so man can measure his moments; I am most certainly inclined to agree. This ending was definitely one that needed time. It wasn’t in the course of months or years like most dramas, it was seriously two weeks—14 days! That is not enough time to heal the many years of heartbreak, reckless living, and self reflection. One thing is for sure—Tae San will always love his daughter, and Soo Jin can love her father unconditionally. 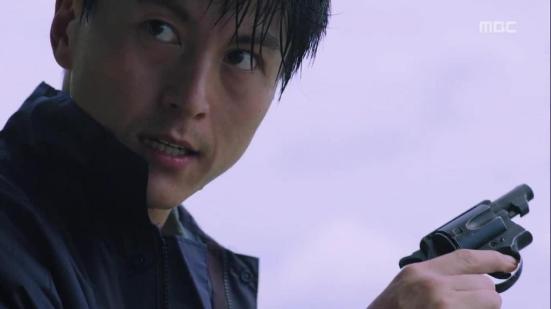 Common sense and Two Weeks were not hard and fast BFFs. Police officers continuously eschewed backup to go after the bad guy alone, prosecutors were quick to alienate those they needed, and bad guys had bond villain like ideas on how to get the job done (no, don’t shoot him, take him to an abandoned warehouse instead, or throw him from a building!). The ridiculous was present in the story of Two Weeks, but it did not make me hate this show. It was bad, granted, because any time you are left yelling at your screen because silly nonsensical things are happening is not exactly a great thing. So, if I have to call out the bad for this show it is the ridiculousness, for the win.

Lore Unnie ain’t never lied! The fact that Tae San was telling the police and the prosecutor’s office how to do their job was absolutely ridiculous! Tae San is supposed to be an intelligent character and that is well and fine, but why is he always coming up with the plans (A, B, C, and even D!) to catch these fools?! The fact that Moon Il Suk was able to drug an entire floor in a hospital was a bit nonsensical as well. Even of you drug them, no one comes to the floor at all? Are you kidding? What kind of a hospital is this where security isn’t making rounds? Even if the surveillance room was drugged, someone else should have been around. It honestly made it look like cops, prosecutors, and hospital staff was all incompetent.

I know some people will be up and armed about this but I care not. Park Jae Kyung? I didn’t like her. I think her story was sad and it twinged at my heartstrings but she got no dice. How dare you act like an incompetent prosecutor to do your own thing! If you would have been the reverse, you could have had “pull” to get things done that were hurdles! You also sent an innocent party (Mi Sook) into a lion’s den to get your revenge! She has no training for undercover work and it got her killed. It was your fault for letting her take on such a heavy burden that you refused to own up to. I am also upset it took Soo Jin’s momma telling you off to get the point—this is not about you and your revenge against Moon Il Suk and Jo Seo Hee, it is about Tae san saving his daughter’s life and his name! Get over yourself, no cookies for you. 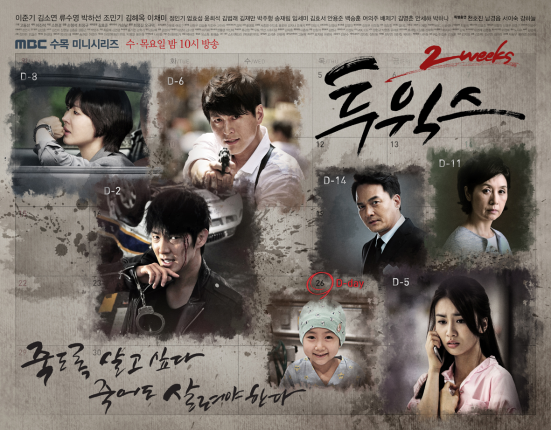 I enjoyed this show, however I marathoned it. If I had live watched I would probably have some different ideas, because of how fast paced and thrilling this show is. I have a feeling that if I had live watched, certain things would have over whelmed my opinion of this drama (see ridiculous moments above) because I would be craving meaningful progress to fulfill my two episode at a time watch. With marathoning I felt like episode after episode kept the pace extremely well without becoming annoying and overdone or frustrating.

The heart of this story really got to me. It was poignant, a man’s quest to save his daughter, and it ended up with more than a few tears on my part. Tae San’s crusade, to save another life, felt so desperate and so raw, that I was hooked as soon as the police car flipped over and gave him a means to an end.

Two Weeks is not a perfect show, and to be honest it is not the most original Korean drama out there. But what it lacks in uniqueness it makes up for in heart and execution. Definitely in my top five of this year, Two Weeks is a show that I am sad to say goodbye to.

I liked the drama. I commend Joon Ki for making me fall in love with him for another year with his acting. Even though the concept was similar to Mandate of Heaven, I am glad to see these characters, storyline, etc. were on completely different playing fields. Some of the best parts were Tae San and Soo Jin and their getting to know each other and genuine love for one another. Of course there were some elements of the show that could have been better, but I do not feel like my time was wasted *Cough* When a Man Loves *Cough*. I am not certain if this show will make my personal top 5, but it will definitely be in my top 10 of 2013.