That’s right; flowers are status conscious too-at least according to Queen In Hyun. I am starting to wonder if my begonias are pissed about being planted next to the sparkler impatiens…If you need me I will be in my garden sorting it all out. Now where do I find that King flower again…

The King arrives at the court party. Ok Jung has just finished telling off the mean girls of the inner court and is preparing to bring her Mother to her quarters. The King greets Ok Jung’s Mom first (in an earlier episode they met at the royal hunting lodge). The Queen brings her own mother to meet the King but they receive a lukewarm if not courteous greeting. The King then escorts Ok Jung and her mother away to have tea. The snub hits the Queen hard and she glares after the happy couple.

The Queen Mother and the Queen have a scheming session which is set by the show’s conniving precedence and focus- the Queen Mother has a new plot to get her majesty pregnant. A visit to a country palace is in order. When the idea is proposed to the King he insists that Ok Jung accompany them, something the Queen readily agrees to (despite getting the evil eye from her mother in law).

Master Jin aids Lord Min in getting a lucrative ginseng deal sought after by Ok Jung’s Uncle. His only request for setting up the deal is a meeting with the King. Lord Min tries to dig into Jin’s reason for the request but quickly realizes he is dealing with someone who keeps their motivations to themselves.

Ok Jung visits the Queen and the two arrange flowers together. The Queen explains that even flowers have a hierarchy and that Ok Jung seems to favor the lowly flowers. Ok Jung cleverly tells the Queen that it is not up to humans to decide the hierarchy of flowers; it is up to butterflies and bees. She leaves the Queen to fume over her words.

Later, the King spends the night with Ok Jung and admits that he wishes her to have his son, which is a big deal given she is a level four concubine.

Uncle Jang, the target of Master Jin’s grand plot, meets with Ok Jung and tells her she must keep the King at all costs. Having the King’s child is paramount to keeping her (and the Southern party) in power. Not like she really needed to be told again. He also warns her to keep any news of pregnancy a secret, especially from the Queen Mother and Queen.

Ok Jung almost faints as she prepares for the upcoming country jaunt. Wisely she calls a royal physician. After his examination he has happy news, she is pregnant. Ok Jung pleads with the doctor to keep her condition a secret until she can tell the King herself- she wants him to be the first to know. Unfortunately Lord Min sees the doctor leave Ok Jung’s quarters and confronts him with threats- spill the beans or face dismissal. We cut to Lord Min notifying the Queen Mother of Ok Jung’s pregnancy. 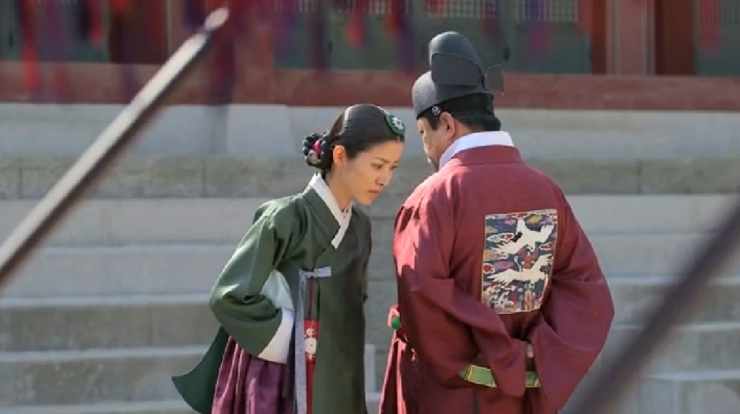 A plot is concocted to end Ok Jung’s pregnancy, facilitated by Lord Min, the Queen Mother, and their favorite henchman (or is that woman?) court maid. The Queen Mother has already decided Ok Jung will take a horse instead of a palanquin on the country trip due to court precedence- as a level four concubine she is not entitled to comfort. Lord Min suggests horse sabotage; the court maid initiates his plan by promptly giving the horse some kind of go-crazy tonic.

The King is not able to set off on the country trip with the court women; he is delayed when a skirmish in the North is reported. Ok Jung, faced with riding a horse in her condition, reluctantly agrees to the mode of transportation due to her Uncle’s instructions to ensure the King stays with her (he promised to come to the country palace as soon as possible and she wants to tell him of her pregnancy).

Ok Jung’s journey on her drugged up horse is okay until part way through the trip- then the animal rears and throws her. Ok Jung is knocked unconscious, leaving the Queen Mother to panic in fear that her part in the plot will be found out. 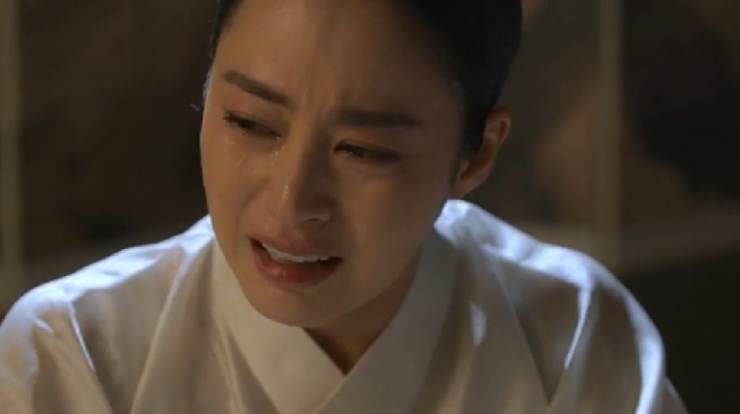 The King finishes his war business and attempts to catch up to the traveling court, once he arrives he hears that Ok Jung has been thrown from a horse and the party has returned to the palace. He rushes back and overhears Ok Jung weeping over her miscarriage (he was unaware of the pregnancy), the fact she causes him pain, and the circumstance of riding a horse as directed by the Queen Mother. 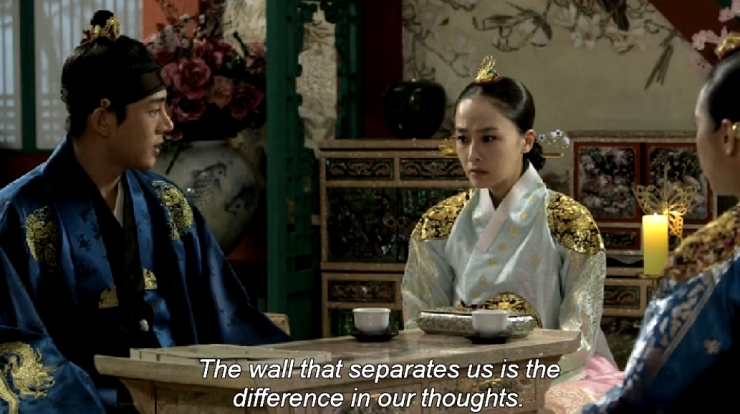 Royally pissed (pun intended) the King finds Ok Jung’s doctor, confirms the pregnancy, and pays a visit to the Queen and Queen Mother. He instructs the Queen to announce Ok Jung’s promotion to level one concubine, and then threatens the women when they protest. He also tells the Queen what divides them, other than the whole lack of love thing, is their idea on status and class. While the Queen is obsessive over social status the King loves Ok Jung for who she is. The Queen Mother collapses in a coughing fit and the King stalks out.

The King visits Ok Jung and tells her that if she has his first son then he will recognize the child as the heir to the throne. Tearfully Ok Jung takes in his words and their meaning; her son will become the future King of Joseon. The Queen, who is outside of Ok Jung’s chambers, overhears this and breaks out in tears of her own. 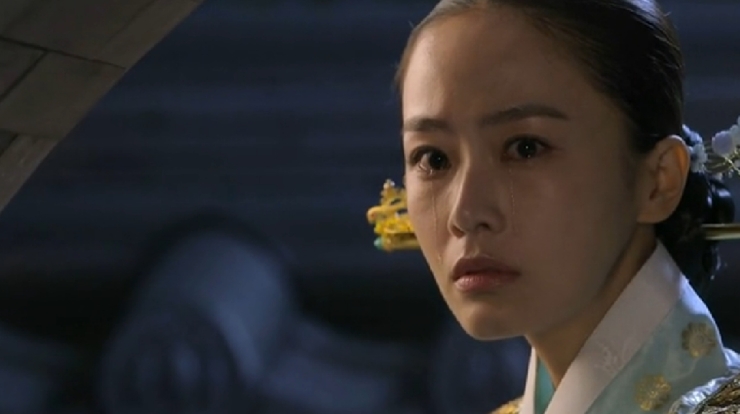 Every time the Queen Mother concocts a scheme it ends in the same way- the King loves Ok Jung more and ignores the queen with a passion. Hell, it is almost like the Queen Mother is Ok Jung’s best friend in retrospect (well, other than the whole miscarriage, infertility, you wench bits). All of which is getting to be a bit of a predictable outcome. Not that I want Ok Jung to lose but I am starting to feel like all of these get Ok Jung schemes are a repeat, like they have a book of 100 ways to try to overthrow a concubine but fail or something. I am anxious to see how the next few episodes will play up the Queen Mother and Queen versus Ok Jung bit and if a cycle really has been set. Because the way I see it the Queen Mother’s next plot will conclude with Ok Jung being declared ruler of the universe.

This episode gave us some more of the mysterious Master Jin; more specifically gave us more Master Jin via an angry sword practicing flashback montage. The man has worked hard to get Ok Jung back and revenge his dead mother. While not at center stage as of yet I am starting to warm up to the idea of Jin shaking this story up. His hatred directed at Uncle Jang and his cooperation with Lord Min hints towards a future showdown- how will Ok Jung react when this man from her past returns and is working with the enemy?  And who is the enemy (pretty sure Uncle Jang set that fire)? That said the one element of this character I worry about is his obsession with the King’s favorite concubine, a worry that hit home this episode as I witnessed Prince D sulking over Ok Jung. With three men obsessed with her are we headed towards makjang awfulness? I hope not, I really, really hope not.

Finally I loved the King’s speech (Colin Firth not included, unfortunately) about what makes a good King. This one minute of dialogue spoke volumes of the King’s character- he is determined to centralize power and instill fear because, as the man said himself, that is what makes a good monarch. Ok Jung had a look of uneasiness at his ruthless words which leads me to believe that our favorite fashion designer sees a little bit of a scary side to her love, a scary super powerful royalty side. Because the King, as a lover, a friend, or as a foe, is still the King with motivations that are not entirely clear.

4 thoughts on “The Status of Flowers: Jang Ok Jung Episode 14 Synopsis and Review”