There is a new historical drama in town and so far so good. Secret Door, the new Monday/Tuesday drama from SBS premiered on September 22nd and took #1 in the ratings with 9.7% (The Night Watchman came in second). We tuned into the show and came away with a few things to chat about (important things -like laws against peasants reading smutty romance novels). Welcome to the first edition of Super Fun Drama Chat Time: Secret Door (AKA Crazy Royals edition). Cheers!

E-kun: Secret Door start off kind of beasty. It is the second show I have seen that premiered this week that has left me speechless

Lore: Because I am not hip, what do you mean by beasty (good or bad)?

E-kun: Oh, I am sorry. It is a good expression; it means like it dominated, killed it, left an impression. LOL!

Lore: Got it (*writes down in notebook like dork *)! Yeah, I think this show is off to a solid start. The first few minutes were really about setting up the document that no one can have (AKA what everyone will be fighting over for some time since). Basically we got a series of flashbacks to tell us the King is (as is usual) at the mercy of the court officials and their political fights.

E-kun: Wasn’t it more like they manhandled the current king into position? Like they killed his brother and put him into power right? I read a brief history lesson so I would not completely in the dark. Either way, this king has like zero power because he signed that document aligning himself with the Norons? Or was it the Sorons? 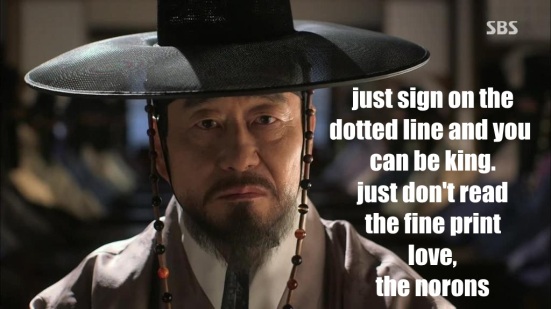 E-kun: That is what I thought… But obviously it is easy to confuse. So… I am not going to lie, and this is going to sound a mess. But we are keeping people from reading books because it has been a law for 400 years? I am a little pissed off!

Lore: Ha- yep. I kept thinking “Of all the things to see in this shows first episode I really didn’t think cracking down on secret library system was one of them”. I understand the point that letting commoners read books is about more than just that issue- it is about how laws are upheld. But still – let the people read their trashy romance novels! Aish! When watching Sagueks I still find myself surprised at how rigid and inflexible the court was (well, in general -of course different time periods had different levels of reform / change).

E-kun: It is more than the law too! Knowledge and power. If we let them read smut novels… they will want to read text books, and know this and that, and learn that the world is round, then they will rise up and b**ch slap us…..

Lore: I never realized how powerful smutty romance novels could be. Thanks show – I will never make fun of Harlequin again.

E-kun: So what did you think of king and crown prince? I am still skeptical about king but crown prince seems harmless… will I appreciate his change?

Lore: I actually like the king. Okay, maybe not like but appreciate. He is deliciously bat s**t crazy, which will probably make for some really cray cray moments later on (the history of these two ends in a cray cray way so I guess this is a given). As far as the crown prince I am extremely interested to see how the writer portrays him through this series. History was not kind to him -he was accused of being all sorts of psycho and violent to boot. I am getting the feeling he will be portrayed in this story as completely misunderstood, but I could be wrong. He did show a bit of a violent streak in episode 1 (that scary glint in his eyes)…

E-kun: I am very excited! I find myself feeling bad for him. He has this powerless father always threating abdication, a wife who is more devious and slicker than a snake, the Norons and Sorons never shut up their silly bickering, and now his BFF was killed over a stupid piece of paper that he knows nothing about! If he does go crazy, he has plenty of reasons to do so.

Lore: True. He definitely has some reasons to be pissed off and crazy. Speaking of his wife….ugh. Just ugh. I was waiting for him to slap her when she burst in on his painting party (not that slapping your wife is okay, but yunno drama land and all).

E-kun: She sucks! She needs a think tap! She always trying to act like his mom more than his wife, friend, or lovers. She needs to sit her a** down somewhere. I was glad court lady spoke up and told her she is tiresome

Lore: Ha! I know- I was like “You go court lady!” That was a great moment.

E-kun: I was like oh snap! Wait– can they cut your tongue out for saying that?

Lore: Yeah I was kind of nervous for her, but I guess since she is the Crown Prince’s right hand woman (or surrogate Mom or something) she can get away with things like that (while the Prince is around any way). So, our main story is really about the King and the Crown Prince but there is a pretty large cast of secondary characters here. Out of all of the characters we have seen so far aside from the leads I am really intrigued to know more about Nah Chul Joo (Mr Gang leader guy who saved Ji Dam). He seems pretty badass – and just plain interesting. 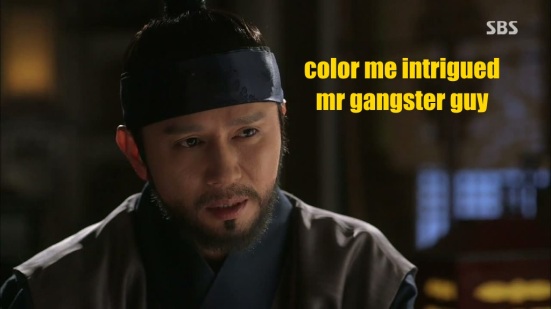 E-kun: I was so excited when I saw who the actor was! I was like, “OOOOOOOO!!!!! I love him!!!” He does seem really interesting. I wonder if he is going to align with crown prince to make some things happen. Because it is painfully evident crown prince will not get the help he needs inside the palace walls. Sure he has alliances, but their hands are tied just like his.

Lore: Yeah, if the Crown Prince wants to get anything done he is going to need some outside help. I am making a guess that Ji Dam and Nah Chul Joo are going to be the ones that help the Prince make some changes (or at least try to make changes, not sure how far they will get). And of course, because all signs point here, we will have a romance between Ji Dam and the Prince (which I am down for the guy needs some lovin and his wife sure as heck isn’t the one for him).

Lore: Holy crap! I just looked up the actress that plays Ji Dam and she was born in 1999! She looks young but I didn’t think she was THAT young. 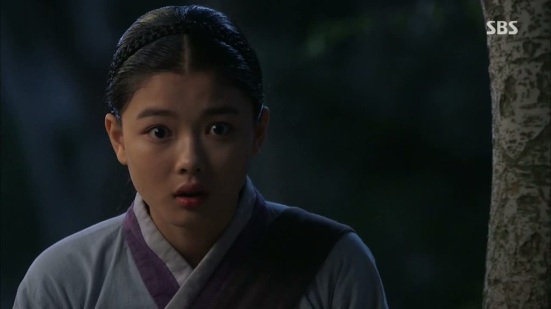 E-kun: Yes, that is the girl from The Moon that Embraces the Sun… And the Crown Prince (Lee Je Hoon) just returned from military service… He is doing a fab job. This is my second project seeing him in.

Lore: I haven’t seen either before, but so far I am impressed (as much as I can be after two episodes any way). But seriously – 1999! Now a romance plot line with her just seems, well, weird.

E-kun: Wait, you didn’t see Kim Soo Hyun and Jung Il Woo in The Moon That Embraces the Sun? I mean, it wasn’t good. I just thought we talked about it before?

Lore: No, I have never seen it. Or at least I don’t remember seeing it (consulting comprehensive drama list)…

E-kun: Don’t sweat it. The kids were the best part because of Jin Goo and Yoo Jung.

E-kun: You are not missing ANYTHING!! Back to Secret Door. Anything else you want to add before we have final thoughts?

Lore: I don’t think so. Being the first week, everything was pretty much setup material so there isn’t a ton to discuss other than impressions of the characters. Final thoughts: People were born in 1999? Really? Oh, and I am ready for all of the crazy this show can dish out. And I mean crazy in a good way – a good, politically driven, insane monarch way. Oh- and let the people read their smutty romances already! *Drops microphone*

E-kun: LOL! Fortunately people were born in 1999 or else we have other issues Unnie! I like it. Seriously, besides me see How to Get Away with Murder, this was another anticipated show that did not disappoint. I am looking forward to the mystery, the scandals (not the smut novels but you know), and the truth coming to the light. Sado is something special for several reasons, and I am enjoying the way Je Hoon is bringing him to life.

Lore: True. We would have issues if people weren’t born in 1999. But that doesn’t mean I have to accept it (crawls back in cave of aging denial). Till next week!