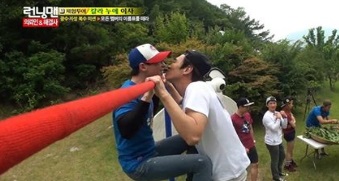 Actor Ryu Seung Soo guest stars. The episode revolves around a Snow White and the Seven Dwarfs theme (can I get a yaaaas!).

It appears that the episode was filmed at Petite France in Gapyeong, Gyeonggi-do. This is the same place that episode 40 was filmed (which has the most epic Running Man jail musical sequence known to man). Yeah, that is Yoo Jae Suk leading a conga line with an accordion music box thingie. You’re welcome.

SNS Updates: AKA Ji Suk Jin has a Weibo account and knows how to use it 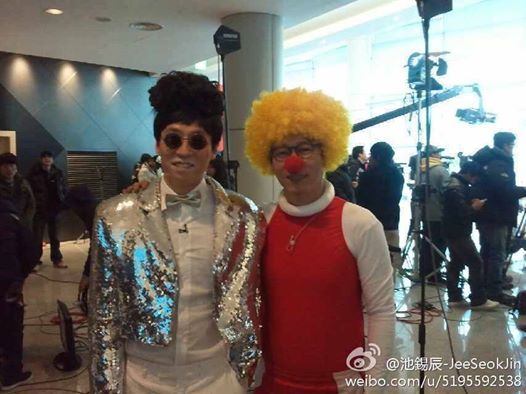 Note: The pic is behind the scenes of episode 25 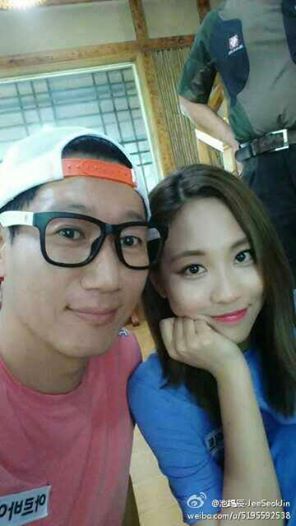 P/S: Miss A’s Fei is one of the guests of today’s filming. 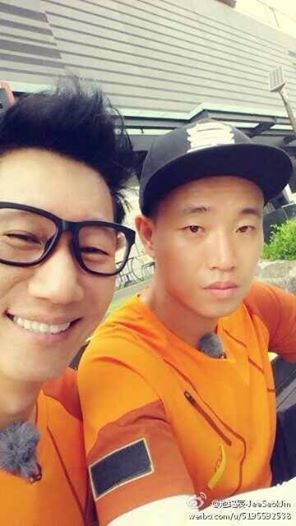 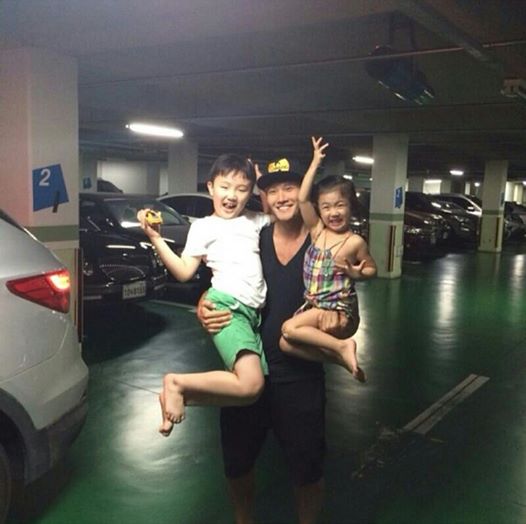 Lol It’s getting harder to lift ma nephew n niece~ I’m really happy to b loved by them~ hope it will last forever~:D 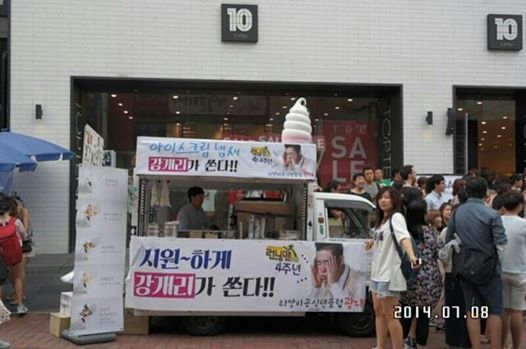 **There’s a ice cream truck prepared by Gary’s fanclub in Korea during filming of Running Man (In celebration of Running Man’s 4th Anniversary). 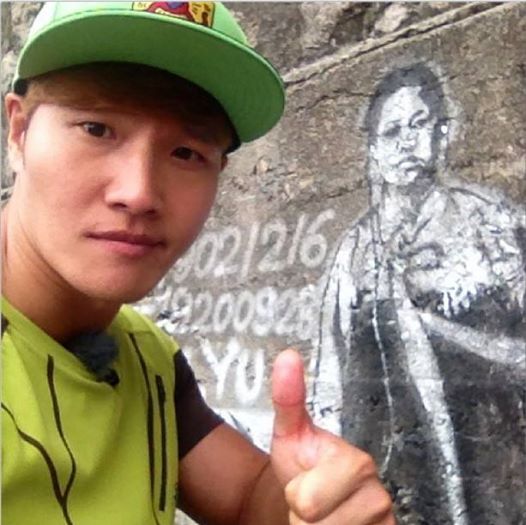 Remembering the heroes that fought for our independence.. Gwan-soon Yu. I found this wall drawing on the street of SamChungDong while we were shooting RunningMan~!

**During filming of Running Man yesterday.

Note- Gwan-soon Yu (the woman in the drawing) fought for Korea’s independence from Japanese colonial rule. She died in prison in 1920 after being tortured for organizing Korean Independence demonstrations. 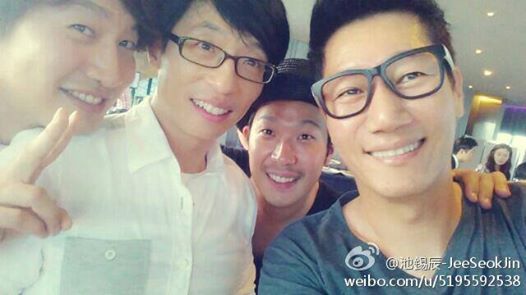 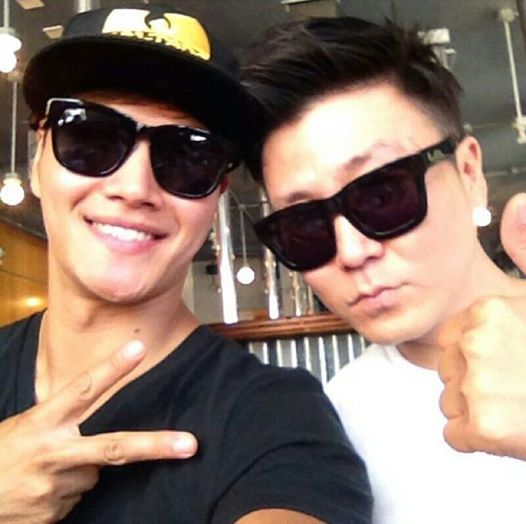 Lol Turbo’s back!! Reunited in LA!!

**The person beside Jong Kook is Mikey, they were known as ‘Turbo’, an idol group that was famous in the mid 90’s to the late 90’s.

Fabien Yoon:
Lee Kwang Soo betrayed me, Ji Sung tore my nametag and Joo Ji Hoon asked me to get lost.. However, It’s because I’m a good friend.. I’ve enjoyed watching it!

Lee Kwang Soo:
Bien ahh.. Thank you♡ Hhmm. You know that I’m not the one who tore your nametag, right? It’s Ji Sung. I don’t know either why Ji Sung did that.

The Giraffe to visit Shanghai

It was recently revealed that October 18th and 19th are lucky days for any Lee Kwang Soo fans living in Shanghai. The main man himself will be visiting for a fan signing event to be held at TIGERTOPOKI Outlet, Citic Plaza- Shanghai. For more information on what is sure to be an amazing time (come on, who would not want to see Kwang Soo in person?!) check out the details here- www.tigertopoki.com 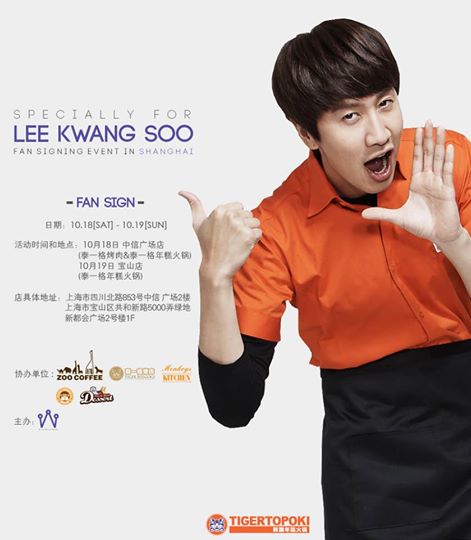 Maknae can work it

Lee Kwang Soo appeared in a photo-shoot for the July edition of Grazia and I have to say – other than the mandals (LORE HATES MANDALS) he was looking fine. Usually we see Kwang Soo in comedy based pictorials (or just plain cute pictorials or adorable pictorials) we actually got to see a smoldering side to the funny man. No wonder he started off as a model. 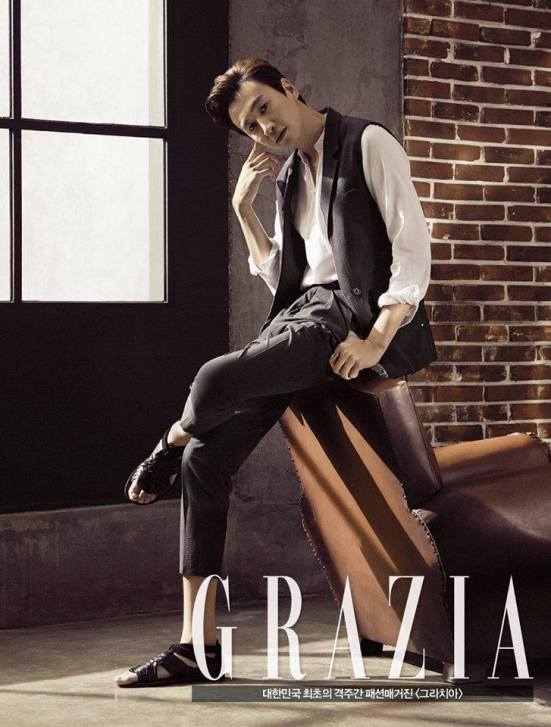 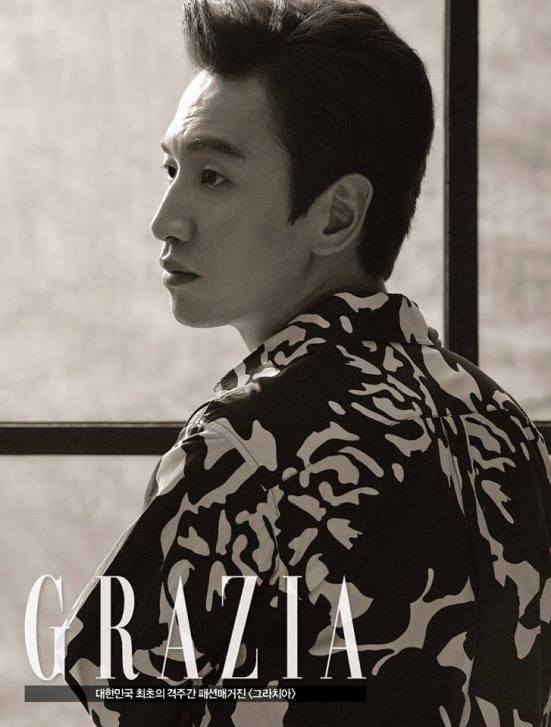 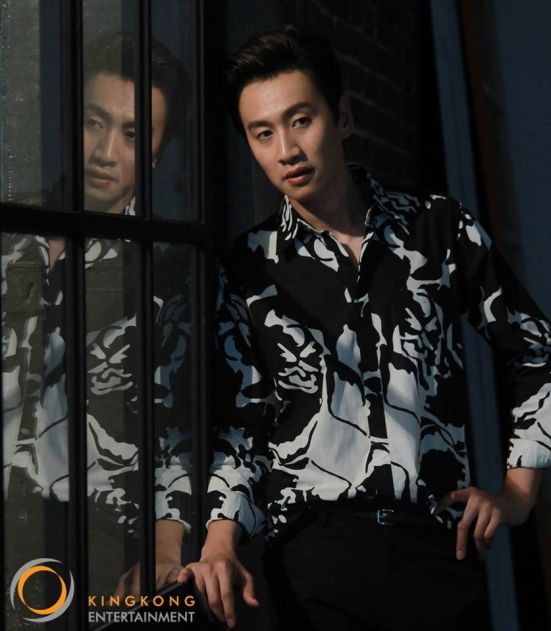 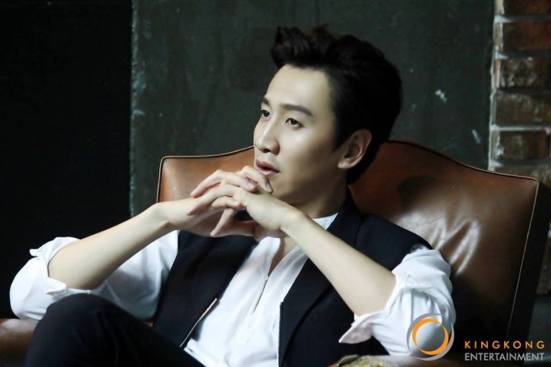 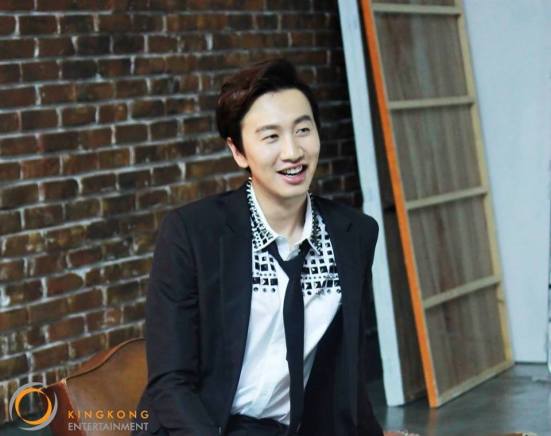 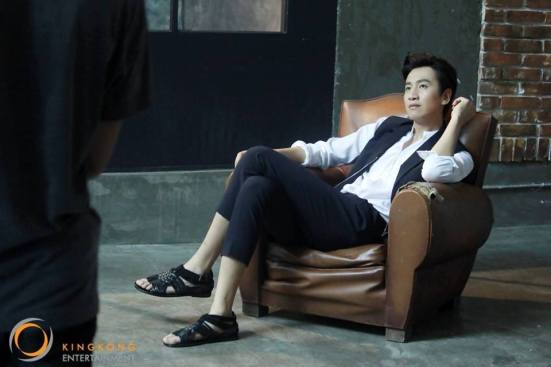 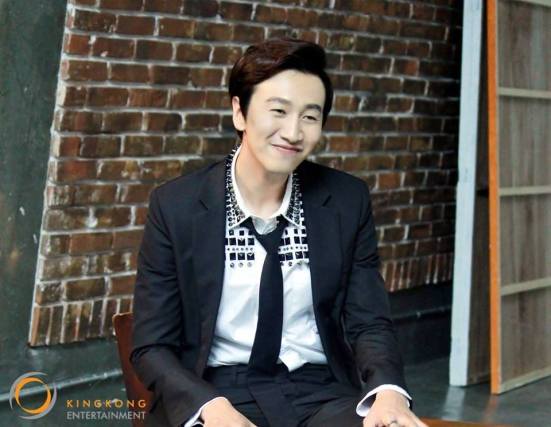 I think the title says it all. I am pretty excited to see actor Joo Won grace the Running Man stage. Joo Won was previously a fixed cast member on 1N2D, Running Man’s direct competition on Sunday nights. Apparently the PDs of Running Man have been after Jun Woo for a while. He was first asked to guest star months ago but could not due a conflict with his schedule (appearing in the musical Ghost). Did I mention I am excited?! So excited we should look at pics of Joo Won filming?!

Joo Won and fellow guest star Hong Seok Cheon are set to appear in episode 206, which was seen filming on July 8th in Samchung-Dong, Seoul. I can’t wait! 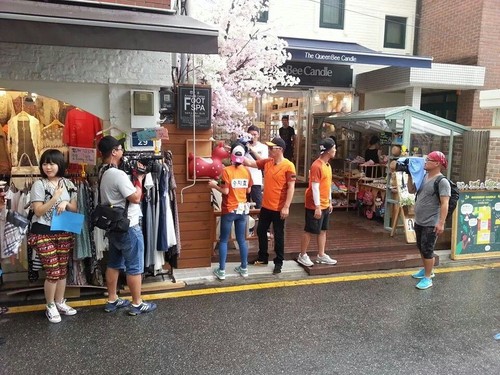 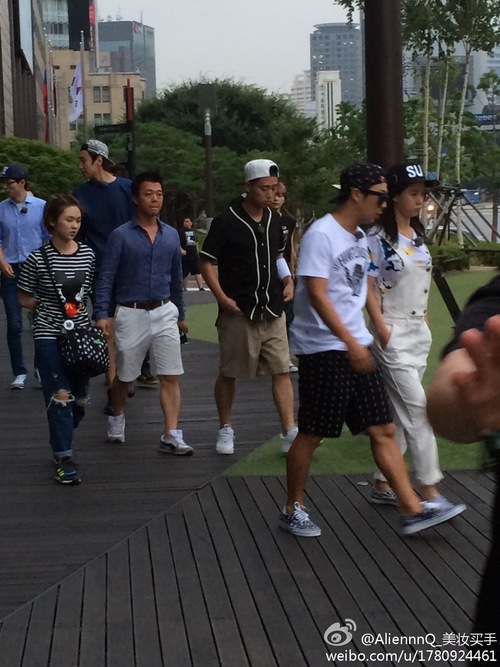 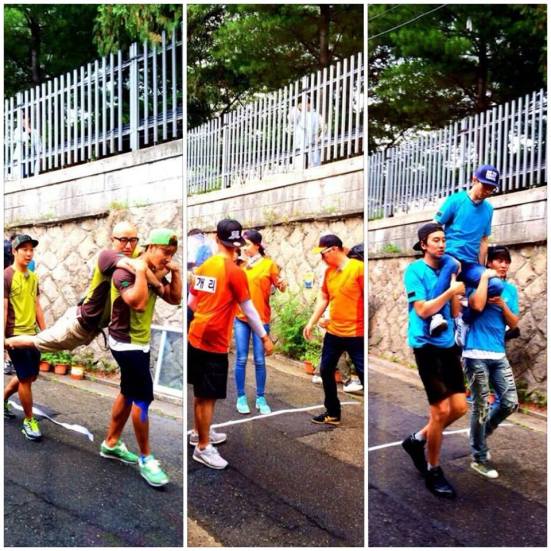 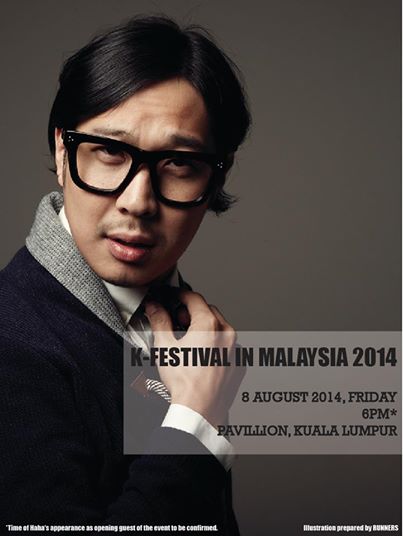 Dream’s Papa will be in Kuala Lampur on August 8th to appear as a guest at the K-Festival in Malaysia 2014. The event starts as 6 PM local time, though the exact time of Haha’s appearance has yet to be announced. MBLAQ will also be appearing at the festival.

Running Man’s Chinese counterpart will be premiering later this year. Here be the details:

According to Chinese entertainment reports, the Chinese version of “Running Man,” which is renamed “Hurry, Brother” (奔 兄弟), held its production presentation yesterday, July 8. The filming for the episodes are said to begin in August.

“Running Man” PD Jo Hyo Jin and Chinese actor Deng Chao were present at the production presentation. Deng Chao will become the main MC of the show, much like Yoo Jae Suk in the Korean production. The cast of Running Man, including Yoo Jae Suk, Ji Suk Jin, Kim Jong Kook, Haha, Gary, and Lee Kwang Soo also sent their support to the Chinese production through a video message that was shown during the presentation of the Chinese version of “Running Man.”

PD Jo Hyo Jin said to TV Report, “I’m a little flustered. I didn’t know that they would welcome us like this. Although I have worries, I will be responsible and do my best.”

The Chinese version of “Running Man” is slated for release in the fourth quarter of this year.

Here is a link to the video of the cast’s message, if you are interested.

A translation of the video:
Yoo Jae Suk: Everyone, our sincere congratulations to your variety show!! Hope that you shall produce an interesting show and it will definitely to be loved by many people out there!

Ji Suk Jin: What is the meaning of “奔跑吧 兄弟”? 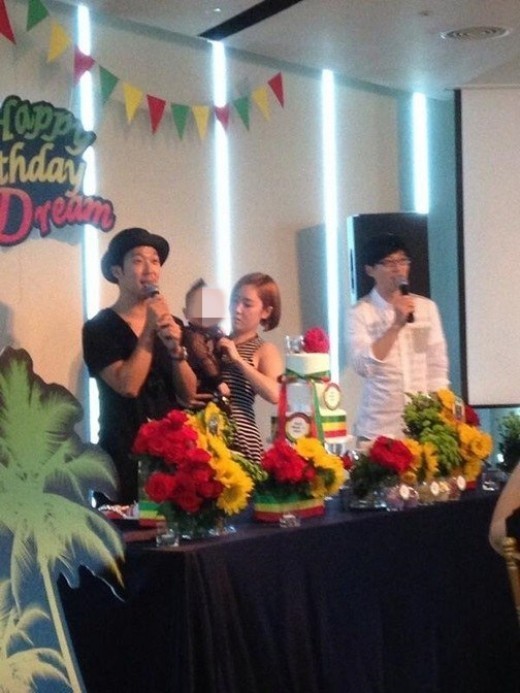 D’awwww, is that adorable child already 1! My how time flies. The best parts of his birthday party- Yoo Jae Suk and Raggae colors.

Entertainer Haha and his wife (and singer) Byul celebrated their son’s first birthday with a traditional “Dol” party.

A photo of the happy family and a famous guest was shared on pianist Yoon Han‘s Twitter account. With the picture he wrote, “Congratulations.” In the picture we see Haha with the mic, Byul holding their son, and Yoo Jae Suk on the other side also holding a microphone. The party decorations suggest a tropical Jamaican theme and part of a banner that says “Happy Birthday Dream” can be seen (Ha Dream is the name of their son). It seems that “Nation’s MC” Yoo Jae Suk was a special guest as this party.

The Nation’s MC had something in his eye during a recent Infinity Challenge Filming. As previously mentioned Yoo Jae Suk and part of the Infinity Challenge Team (including Haha) were gearing up to compete in the Korean Speed Festival. Yoo Jae Suk was involved in an accident while practicing some days ago, which likely only added to his disappointment. Hugs Jae Suk, I know you did your best!

It has been revealed that Yoo Jaesuk showed tears for the Korean Speed Festival (KSF) after being unable to complete the race.

For this upcoming broadcast of MBC’s popular variety program, “Infinity Challenge”, on the July 12th, it was revealed that the members showed tears during their racing debut.

In February, the “Infinity Challenge” members were challenged for a “Speed Racer” special. After practicing for 5 months, Yoo Jaesuk, Jung Joonha, No Hongchul, and Haha were chosen as the final members to appear at the KSF.

However, despite their strong intentions of wanting to do well during the race, the members could not show their true skills due to some unexpected accidents and incidents. Yoo Jaesuk showed extreme regret, with swollen eyes that reflected the tears he shed.

Thank you Running Man for four great years. Keep on running because you make me happier than you will ever know. Cheers! 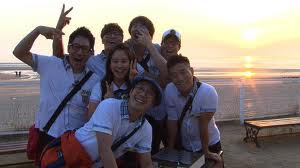