Gary is having the best week ever, everyone is on SNS, and everyone is talking about your scent. Yes, your scent. I said it. Time for some Running Man headlines. Cheers!

It has been fun trying to make heads or tails of which episode is actually going to air next (after the idol challenge was supposedly pushed out to June 22nd). It appears that episode 198 will be the kickoff of the annual Asian Dream Cup special. Park Ji Sung will be guest starring. My confusion lies in the idol episode, which I had heard was the beginning of the Dream Cup special (with the winning idol attending the Dream Cup with the RM cast). Judging by some social media updates, the idol guests appear to have been filming recently (so the original filming date for this episode of May 13th appears to be incorrect).

Regardless, the cast just filmed an episode yesterday so there are no previews to be had. If you find out what next week is actually about let me know in the comments. Thanks! Oh, and enjoy some BTS pics from an episode that may or may not air next.

Those crazy kids and their SNS

There were a bunch of updates on the cast members respective social media sites, here they be:

So Lee Kwang Soo buys his hyung clothes. Why do I find this so funny?!

*It’s behind the scenes of movie “Confession”.

::Translation::
Proud that I did filming with player Park Ji Sung & Seol Ki Hyun^^♡ Waa oohh… We struggled a lot as the idol team!!!!!

Note: Chang Min was filming yesterday along with several other guests.

Do anticipate Gary and Jung In’s new song, ‘Your Scent’ which is to be released on 27th of May!

Kang Gary is busting out the solo fan meet!

LeeSsang’s Gary will be holding his solo fan meeting in Hong Kong.

An affiliate of LeeSsang’s company spoke with Newsen on May 29 and said, “Gary will be carrying out his solo fan meeting in Hong Kong on June 8.”

As SBS’s Running Man is greatly popular in great China region, Gary also has numerous fans in those countries. He has proven his popularity by being surrounded by fans each time he visited.

Meanwhile, Gary released a duet with Jung In on May 27, which has charted at number one on various music sites.

Some more info on the event:

*Gary shall be heading to Metro City Plaza, Hong Kong as the opening guest for the event.
*Meet & Greet & signature sessions will be held at the venue and it is limited to only 100 pieces signature sheet. Fans are able to redeem it on 31st of May 2014. Details of it to be released soon.

Duet with Jung In you say?

Kang Gary and Jung In released their new duet, “Your Scent” on May 27th. And they killed it. Two hours after the single was released it placed in the top spot on five real time charts (Cyworld, Bugs, Genie, Olleh, and MelOn); shortly following this achievement they toped Mnet, Soribada, Daum, Naver, and Kakao for an all kill. Jung In and Gary fighting!

Jung In composed the song along with Duble Sidekick and Gary wrote the lyrics. I have always loved how these two complement each other vocally (if you have never heard “Girl Who Can’t Break Up, Boy Who Won’t Leave” drop anything and everything you are doing and listen to it now!) and I am happy to report that “Your Scent” does not disappoint. Oh, and there was a promotional photo shoot with these two looking amazing. Check out “Your Scent” and a whole slew of pictures below. 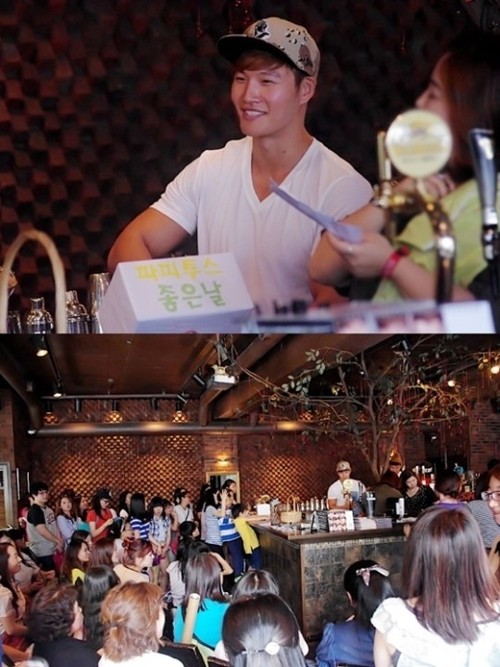 The event, which had taken place on May 24, aimed to raise money in order to help those who were in difficult situations. Besides online donations, the fans also held events in which they sold items and auctioned off Kim Jong Kook’s personal goods.

As the singer’s fans had held the charity event every year, Kim Jong Kook decided to visit the event in person. Thus, the May 24 event had become a time when fans were able to talk with the singer as well as purchase his personal items. All the money raised during the event was donated to children who needed funds for medical surgery, and also to people who were experiencing rough times.

A representative of Kim Jong Kook’s agency said, “Originally, Kim Jong Kook’s fans had planned the event to occur last month following his birthday, but due to tragic events that had occurred to the nation (Sewol ferry accident) the event was postponed. We are glad that we were able to help and participate in a meaningful event.”

The tiger will be in Malaysia for a June fan meet! If you go I want pics- lots and lots of pics (so I can live vicariously through you).

Known by many as Sparta from popular Korean Variety TV Show “Running Man”, Kim Jong Kook will be back in Malaysia again this June! It has been exactly one year since the star last visited Malaysia for a showcase.

The Kim Jong Kook 2014 Showcase Live will be held at Encorp Strand Mall, Kota Damansara on the 7th of June (Saturday). Be prepared to get up close and personal with Kim Jong Kook!

More details regarding the live showcase will be revealed soon.

Malaysian fans, be sure to tune in to 8TV Nite Live this Saturday at 11:45pm to win VIP passes to catch Sparta Kook live in action!

Because what is a week without Ji Hyo updates? First off Mong Ji is set to have a fan signing for Yesse:

Signing based on a first come first serve basis, priority to customers purchasing at least 150,000Won of Yesse’s products.

There are no official news of this event, but for those going/in Korea you might be interested, it is not near Seoul!! Don’t know how reliable this is… but the fan asked the staff and got this news… there were fan signing events for the previous 2 years as well, so this is probably true… those who want can try your luck on this

Ji Hyo is a model for NBA Korea and here is the video to prove it: