I underestimated you show. I made my mind up too soon. Apparently you were just going through some awful growing pains. I am sorry; I hope we can be friends.

My first impressions post on SBS’s Monday/Tuesday drama Jang Ok Jung, Live in Love lauded the inconsistencies and general mindlessness of this drama. Truth be told, I had a strong feeling that my first impression would be my final impression- that this drama would be a laughable attempt that was entertaining mostly for its absurdity (and Yoo Ah in, of course). What I did not expect was that this drama was going to get good. And I mean addicting, fast paced drama good.

Jang Ok Jung is not the first drama that has surprised me, I have had plenty of “wow that was unexpected” moments while watching Korean drama, but I have to say that this is the first drama that I have watched that made me want to voice my opinion change so early on in its broadcast. I have no other way to say it, I love this show. While Jang Ok Jung is far from perfect (and not a masterpiece by any means) it is truly fun to watch, which in my opinion over rules the elements that this drama is failing at.

Truth be told I have not had this much fun since watching Queen In-hyun’s Man (oddly enough given the quasi historical link between the respective stories). Both dramas possess an addicting pace and tone, keeping my often distracted self engrossed in the story. While QIHM is by far a better show when I put on my critical hat, when I put on my sit-back-and-have-fun hat JOJ is on par with QIHM. Note-Another drama that comes to mind when I think about how JOJ has sucked me in despite its faults is the classic Boys Over Flowers- a drama that did a whole lot wrong but was super addicting.

My new found infatuation considered I have put together a list of elements that have sucked me in, referencing the shows improvements using the names of 1960s pop songs. This is what happens when Lore in Stone Cities gets too much sleep. Cheers!

All you need is love

Kim Tae Hee and Yoo Ah in have amazing chemistry. As the couple that experiences an unexpected and torturous fate these two actors are believably playing up the love that-cannot-be. The story, as adapted from the 2008 novel by Choi Jung mi, portrays a destined set of meetings between the King and the determined fashion designer. Through their chance meetings, which are decidedly deceitful in their understanding of each others true identities but insightful in their honest emotional exchanges, Jang Ok Jung and the king fall in love. Then the truth bursts forth, leaving both characters to decide how much they believe in their past interactions and how much they buy into the politically saturated atmosphere of mistrust that surrounds them. I heart his romance, even if the history books give this couple a definite horrible ending. 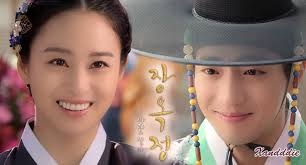 When a Man Loves a Woman

A love sick shadow to our main love line, Prince Dongpyeong has known Jang Ok Jung for some time. In fact he has fallen in love with her. Too bad she does not necessarily share in his feelings. On top of the differences in attraction our Prince has no idea of Ok Jung’s runaway mission or her entry into the palace. This dynamic promises many a love triangle awkward showdown ahead. A story element such as this can cause great annoyance when poorly executed or too often relied upon to move the plot forward; somehow I think this messy situation (that, um, involves the king. Try getting through that roadblock) will only serve to further our plot in a good way. And make way for moments crackling with anger and jealousy- in a non-annoying way. 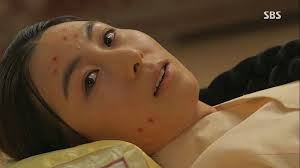 I Want to Hold Your Hand (so I will grab it right now. Yes, right now)

Is he the king? Yeah- he wears the robe doesn’t he? Is she detested despite her good nature? Of course, she nursed someone with small pox and invented bulletproof armor! Is the court a backstabbing circus? Yes, why else would everyone get tortured? Does she regret not becoming queen? Um..why else would she become a concubine and constantly declare she will never give up.

So, this show reinforces all premises immediately. Like right away. But that is not bad for the show. The plot pacing that keeps me sucked into this story requires a fast turnaround of ideas. Is the queen sick?! Let’s wonder for seven minutes then visit her on her deathbed!

While I may be exaggerating such is the pace that keeps me engaged; while not a method that will increase this stories cinematic or storytelling mastery, this is a method that gives JOJ an extremely approachable and enjoyable feel. At least for me. Which I gather is why I just rambled on for so long.

So give JOJ a chance. Put your critical hat in the closet and enjoy this show for its fast paced plot and addicting romance. And let me know if you agree or disagree with my assessment. Does the fun of viewing this story outweigh what it does wrong?