The Princess’s Man is an excellent drama, if not a perfect one. The story was well thought out, the production executed in a way that left little to be desired. I have thought long and hard on the character that has “stuck” with me after the drama has ended (the difficulty on focusing on which character was the strongest is a testament to the overall awesomeness of this show).

After much reflection I have realized that my critical eye returns time and time again to Princess Kyung Hye. Not the main female lead of PM, but by far the strongest- at least when you consider character growth and depth. Here is to you Princess, and here is to you Hong Soo Hyun (for the performance of your career thus far).

In the beginning of this drama we find Kyung Hye as the stereotypical spoiled princess. Growing up without a mother, doted on by her father, and in the enviable position of a royal princess Kyung Hye is initially hard to sympathize with. A scene between our heroine of the story, Se Ryung, and the princess is a perfect encapsulation of the first glimpses of this character-essentially is delivered as such:

“Why do you have so many shoes when you will not wear them all?”

“Because I want them”

The moral of this conversation snippet is desire, no matter how impractical. While Se Ryung desires to ride a horse, no matter how insane this want is for a person of her station (a niece to the king- a noble born female in the Joseon era) we find that the princess retorts with equal desire to own many things, delivered matter-of-factly. At face value this gives us the spoiled princess image, it is the story progress that makes this character so much more than the material girl.

Not long after the aforementioned conversation Kyung Hye finds herself engaged to her tutor, a man who knows only Se Ryung as the princess (due to a switcharoo worthy of the 1961 version of Parent Trap). The princess, with the understanding that her potential fiancée does not love her, grasps onto the marriage with the knowledge that her tutor is the only one that can protect the crown prince and her own self from the enemies that threaten the throne. Despite the repercussions of such a marriage this character is stalwart in the face of Se Ryung’s newfound relationship with the tutor, to the point where she announces that she does not want to marry this man for the simple ideals of love but for the protection of the throne- huzzah. At the time of her proclamation one can view this character as no more than a cold hearted girl, a person used to possessing what she wants. Upon further review her words speak to a worldly understanding and sacrifice (both of her relationship with her cousin and her own happiness) that displays a character maturity that is truly breathtaking. 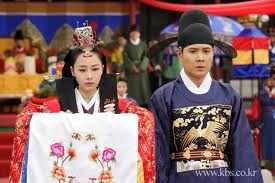 Due to a turn of events her fiancé (the man her cousin Se Ryung loves) is out as a future husband. Suddenly the princess finds herself marrying the son of a fallen nobleman, Jung Jong. Far from love at first sight, the Princess accepts the marriage upon her father’s wishes. Within a day of her marriage her father’s health takes a turn for the worse. Before long her the King dies, leaving the princess in a vulnerable position.

Resolute to protect the new king, who is her younger brother, the princess attempts to go against those who are hungry for the throne, standing against their orders. When it is no longer possible to do so via her place in the palace, she stands tall in the face of opposition in any possible way. And when events take a horribly tragic turn she retains her majesty and grace, focusing on her younger brother with death, exile, and the end of all those loyal to her father closing in around her.

As the story progresses her marriage to the goodhearted Jung Jong strengthens; both characters faced with life and death situations (literally) form a bond that becomes stronger than the will of those who would see both of them dead.

I will not spoil the entire story of PM, needless to say it is hard not to when describing this character. I will say, however, that no matter what is thrown at the Princess a strong resolution is presented, even if it is next to impossible to imagine oneself facing such events- and even if such a resolution is a compromise. For this I recognize this character as a great character indeed.