I am a firm believer that summary reviews can suffice in most situations. However in the case of Shut Up Flower Boy Band a short rambling will not do. This Korean drama brought all of the right elements-greatly surprising me with its solid acting, writing, and directing. It is rare to see a show about teenagers that actually captures the teenage angst that is often elusive to the majority of directors. Shut Up Flower Boy Band owned teen angst in a way that was neither overdone nor understated.

To be young with great friends. It is a priceless feeling. SUFBB took that reality and twisted it into a thousand threads of drama awesomeness. What did it mean when you were on the verge of adulthood? What kind of choices were made, what kind of sacrifices faced you? How did you react- and what did your reactions say about how you felt about the people around you? The story of Eye Candy, a band made up of poor high schoolers and the journey that they embark on asks a multitude of questions. The answers to these questions are often raw, just like the experience of being under twenty- full of life, conflicted, and facing potential setbacks at every turn.

We can all look back at adolescence and find that coming-of-age time period, when what we did and who we hung out with determined our current state- either through continuing friendship or decisions to move onto different pastures. Shut Up Flower Boy Band captures this time of young adulthood perfectly. You can feel the young confusion, the youthful rebellion, the steadfast hope and dedication bleeding through in every episode. In some dramas set in high school the focus on youthful anxiety is overdone- to the point I need to fast forward or risk throwing my remote at my television. SUFFB knew when to stop the teenage angst and infuse some reality. That is one of the things this drama did best. It felt real, the characters were fluid, believable. 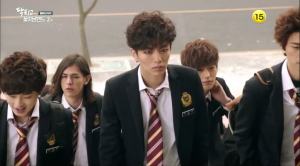 The characters made this drama. There is a part of me that thinks that the characters were only great because of their ensemble. Then I realize that means the story was great. Without a great story there could never be a multitude of personalities that depend on each other for storytelling gold. From the relationships to the angsty feelings of betrayal and raw hatred this drama delivered. I could watch this cast for one hundred episodes and not be bored.

Byung Hee, in his 90 minute spectacular, left us with a memory of a troubled young man that was the larger than life inspiration to his friends. There was no doubt that he was the leader, and in the short time we spent with him that assumption was not questioned (at least by this viewer). Obviously creative, oddly out of this world, he directed the rough edged rock band with the same aplomb and rawness that he spent on chasing girls. Through the drama he was the ghost, Hamlet’s father, hanging over the choices of his friends and the motivations of Eye Candy. Byung Hee left an indelible memory of friendship in the boys of Eye Candy- enough to see them running off to visit him in the last half an hour of the drama. He was their glue- the ultimate thread that drove them the boys to what they eventually became.

Ji Hyuk. He was a character that made the entire situation real. Faced with hurtles of emotional tragedy and sociological confusion he did what he wanted, what he thought was best. Ji Hyuk is an unlikely hero, a character that took up guitar because of Byung Hee. Yet he was perhaps the most dedicated to his music, a character that found much needed friendship and an assembled family via Eye Candy. Right or wrong, Ji Hyuk was eternally lonely. His friends were his family. Yet he grew enough, cared enough, to let those closest to him go. In the end it ensured a lack of loneliness for this character- a fact that was confusing prior to realizing Ji Hyuk was the leader all along, he did what was best for the band. It takes gumption to cut the ties that bind you to happiness. Ji Hyuk let the bonds go and grew into a man in the process. 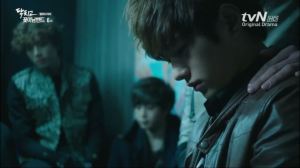 Hyun Soo- the dedicated one. From the beginning it was apparent that he was on a different, albeit similar track as the rest of the band. It was only when material differences got in the way that Hyun Soo and his drive became more apparent. Ji Hyuk, his best friend, was prepared to do anything for Hyun Soo. Hyun Soo was prepared to continue down a path of hard work and dedication, the strength of “his boys” driving him forward. Eventually Hyun Soo was pushed towards his goals through the friends that he would not abandon. The friendship that held Hyun Soo back and drove Ji Hyuk forward clashed, ending (after much sorrow and confusion) in the understanding of true friendship. One of the best bro-mances I have ever had the pleasure to view. 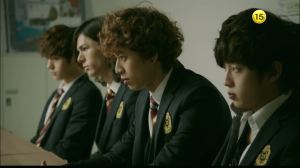 Do Il is quiet, intimidating when needed, and intellectual to a fault. Kyung Jong is cute, a great cook, with a heart of gold. Ha Jin is a playboy, naïve in his worldview, he feels strongly and hates with a passion. All three characters round out Eye Candy. No less important than Hyun Soo or Ji Hyuk, they encountered less screen time but a similarly strong impact on the overall storytelling of SUFBB. Eye Candy, through out most of the series, was a quintet of rebellious punks. Without the five of them they were somehow damaged. Even when the dream of a festival-playing band deserted the five boys, they were stronger together. Take one away and you had a part of a whole- a weakened entity that was missing a corner of its foundation. 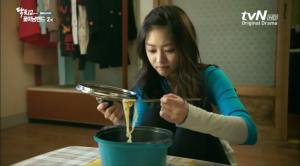 Soo Ah is a character that I unexpectedly began to appreciate. She started out as the elusive muse to the larger than life Byung Hee.  Soo Ah debuted as a girl that gave us a glimpse of  spoiled innocence- a specimen with unclear motives and personality. Her transformation into a hard working girl that lived on a rooftop was enough to make me love this character. She was not horribly original, however Soo Ah and her eventual noble sacrifice was to be admired. Oddly enough I found her to be the perfect partner for a teenager growing into a man- she had enough maturity to give him some of the motivation he needed. She was his biggest problem but his greatest joy. She met a lonely boy face to face and helped to make him realize what life was, and what he really wanted out of it. The relationship between Soo Ah and Ji Hyuk could never have been a walk in the park- that would have been beyond boring. It was the mutual sacrifice that made this character make me love her all the more. And in the end- she really was their muse. She had a lot to do with their fates, a lot to do with both singles that made them stars. She was the force that controlled Eye Candy’s leader(s) motivations, enough to cause tragedy, happiness, and success in a mixed up drama medley.

The villains of this drama could be viewed as saviors. They drove the band, the boys, towards the self understanding that they needed. Without the “witch” and “strawberry fields” Eye Candy would not have met the brick wall that drove them towards the ultimate answer- let’s be happy, let’s be friends. Strength in numbers, and most importantly-

SHUT UP AND RUN! 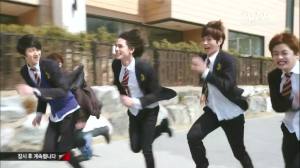