Everyone and their brother is gunning for the best villain of 2014 – AKA that dang document, and our Crown Prince has an emotional meltdown (which is completely justified). Time to discuss Secret Door episodes 7 and 8, the super fun drama chat time way. Cheers!

E-kun: King? What the hell?! You let them arrest Sun/ Sado because of Park Moon Soo says you really should abdicate the thrown?! You suck dude!! 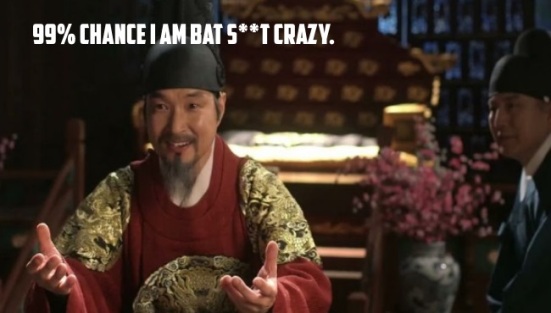 Lore: Yeah, the King does suck – he is stark raving mad in my opinion (or maybe just so devious I can’t help but think he has a screw loose). Episode 8 changed three relationships in a way that I think will drive the rest of the story- The King now sees Sun as a very real threat, Sun now hates Moon Soo (and Dad), and Moon Soo is now against the King. I won’t lie, at the end of this episode my mouth was hanging open. I mean, I knew Sun would be accused of murder at some point during this story, but I guess I didn’t think it would happen at that point.

E-kun: I felt is as soon as he came out of the house covered in blood. For one thing I have discovered from watching too many K-drama’s, the easiest choice is what will play out first. But it is absurd… why would he want to kill Kang Pil Jae? And I need to see this evidence that has made Sado a suspect… Just because he was there, he had to do it? Doesn’t that seem too good to be true people?

Lore: Oh, when he was walking out of the building I thought the murder accusation would happen right then, I guess through episode 8 I thought that danger had passed. Yeah, I want to know too – what is the evidence they are basing the arrest on! Having the King now gunning for Sun may just lead to ludicrous arrests. Based on what we have seen of the King so far he plays the political game a heck of a lot better than Sado does. I feel like he is always going to be one step ahead of his son, or at least quick to catch up to him if he gets ahead.

What I thought was really interesting in these two episodes is just how many different people were chasing the cursed document (for different reasons) I was a big fan of how episode 7 and 8 joined together into one arc, the way the pieces were revealed (of who was after the doc for what reasons) was paced nicely, in my opinion.

E-kun: What makes it worse is that Sado loves and trusts his father, while the king keeps tabs on him to make sure this document is never found! And oops, it has been found… or at least the essence of it. These episodes were pretty great; everyone trying to get the document or at least be in the loop on the grand scheme to either hide, have leverage, and out for their own good. Like Crown Princess… She does not know what the document is, but she is struggling to have Sado under her thumb

Lore: I still find the character of the Crown Princess interesting. I fully admit she is abrasive and conniving, but there is something under that (human emotions maybe?) that comes out every now and then. Not that she acts on any emotions she has (other than jealousy), but she has a vulnerable side. I honestly think she doesn’t understand how to forge an interpersonal relationship that is not based on the standards she lives in (court rule). 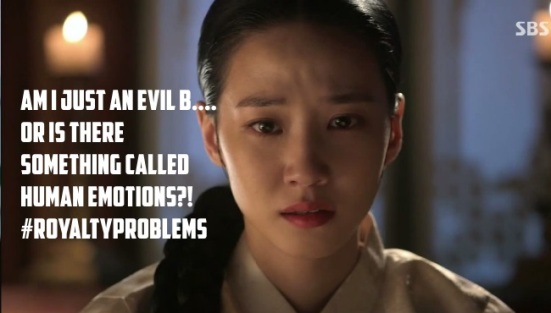 E-kun: I wished that I felt that way, I find her to be annoying and a mess. I can’t help but agree with her father it would have been better if she was born a male. I see what you are saying in regards to her character, but I don’t think it is vulnerability. It is the moral fiber inside of her that she often ignores for whatever reason.

Lore: Whatever it is, she is really good at ignoring it, I completely agree. One thing I was a tad bit disappointed in with these 2 episodes is what felt like a lack of Ji Dam. Maybe I just felt that way because I really like her character, but it seemed like we didn’t see enough of her.

E-kun: It is a shame, but since we are all in the palace, and she needs to be in hiding, I understand why we only saw her here and there. It is also dangerous for her to be taking on some of the task that she is doing. You can see it in Sado’s face how much he hates relying on her, but with vicious vipers to his left, right, behind, and in front of him, he really doesn’t have a lot of options. Ji Dam is smart and brave, and I want her to live her life that makes her happy; but as an adult I don’t think I would be excited to let any of the children I know or look after run around in such a scary situation… Look at how competent grown men are dropping like flies?!

Lore: Yeah, I don’t think I would want her to be in the thick of things (love the scene where Mr. gang leader told her to stop writing mysteries and switch to romance novels. Ha!). With the events of the last two episodes it does make sense that she was not front and center. The character of Ji Dam has really grown on me. Speaking of Sado – the moments when he found / after he found the book in Moon Soo’s house – wow, I felt so bad for him.

E-kun: I broke out into tears girl. I was crying as if someone just told me I would never see Song Seung Heon’s mole in a shower scene again!

Lore: Bahahaha! You must have been crying hard!

E-kun: Moon Soo practically raised him throughout the years. Him and court lady Kim… So I understand why he felt betrayed and hoodwinked. Even though this was not a malicious murder (is that even possible) he still is responsible for killing his dear friend, and hiding a whole other side of himself from Sado. I am certain he does not know how teacher and daddy are ace boon-coons by way of pity and document tracking.

Lore: When Sado finds out the link between his Father and Moon Soo things are going to get ugly. I kind of think this may happen sooner rather than later, but I could be wrong. That document! So what is the body count that this thing has racked up? Ten, twenty people?! So effective. Oh, and kuddos to the writer for introducing the second deadliest/effective villain of 2014- the evil document’s fraternal twin, the book secret document. *Hides eyes in fear* 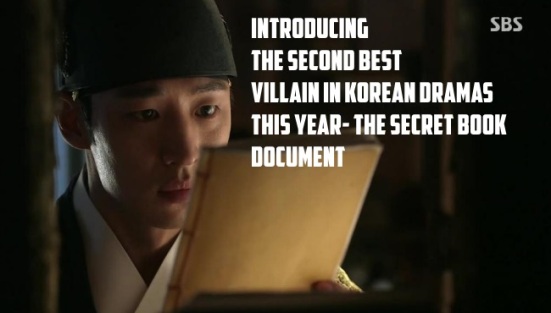 E-kun: LOL! What is the body count? I think we are up to a solid 4 or 5 that we know about. While we are discussing villains- Let’s talk about Kim Taek and his very capable bastard son as I like to call him, “The Original Huntsman”.

Lore: Ohhhhh, I like the nickname! Yes, so his bastard son was promised he would be “legitimized” if he killed Shadow and found the document. He tried and he failed (as far as I know, since Moon Soo has the doc, or appears too. I couldn’t help wondering if the huntsman had figured it out somehow and took a copy before Mr Gang leader came and stole it, probably wishful thinking).

E-kun: I am not sure if Huntsman got it, since he is in the process of trying to torture Na Chul Joo, it is likely he does not have it. If the show pulls something out of its bag of tricks– it has to be pretty darn convincing. Because if he does have it, that would make Huntsman sadistic and a mess.

Lore: I was thinking it was possible after the huntsman tortured Chul Joo he discovered the pipe and took the document (since when the gang leader showed up the huntsman and shadow were in hiding, I might have missed it but I didn’t think we had a good idea of how much time passed between the torture scene and this scene). Again, probably wrong, but this show keeps me on my toes. I think I read into everything too much …

E-kun: Not at all, with this show it is like Clue, I spy, Hide and Seek, Cops and Robbers, and Hungry Hungry Hippos all in one. You have to keep your eyes open or you will miss the smallest thing. Like how Kang Pil Tae underestimated his insurance policy. Or how the King was “WTF”-ed by Moon Soo when he said history needs to be restored, abdicate B**ch! It is all just a game that is fun to see unfold. From the outside looking in that is.

Lore: That it is! Any other points we should discuss before we do parting thoughts?

E-kun: think I am good! I really enjoyed these last 2 episodes for so many different reasons, but mostly, because it was well written. Shout out to the writers for creating a world of deception, mystery, and corruption that doesn’t make me sick or say, “Really? WTF?!”. In the next few episodes, I look forward to seeing more of Ji Dam, Sado unravel more of the foolishness that got his BFF killed, and the people in court dangling in the wind at the account of the deadly document of 2014.

Lore: Best episodes yet. Writing was amazing. And now we have two super villains (yes, I promoted them to super villains) – and I am truly afraid. #Fearthedocuments