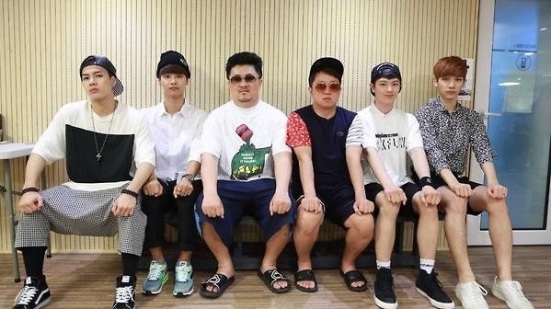 As has been known to happen (far more than it should) I found a new variety show subbed and dove right in. Despite being behind in a couple of dramas and not really having the time for another program I threw caution to the wind and hunkered down. Also known as “Oh! A shiny new show! Let me just watch you for four hours!” The good thing is the show I started watching was hella entertaining and I would recommend you check it out. Time for a Stone Cities rundown on MBC Every1’s Hitmaker. Cheers!

So what is the show about?

Two talented music producers set out to create the next great super popular idol group. They call upon their vast celebrity network to find the most talented guys for their hit group. As super star producers they compose and write an amazing debut song for their new mega group. The show follows their journey towards producing their first (sure to be) hit. 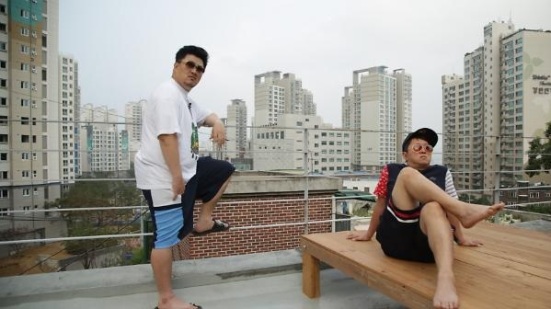 Well, at least that is the concept this satire is based on.

Hyungdon (one of my favorite comedians – as seen on Infinity Challenge, Weekly Idol and a score of other programs through the years) and his partner in crime Defconn (a rapper, funnyman, and co-host of Weekly Idol) get together as a producing team named….get ready for it…..Brave Double Tiger (which is a play on the legit producing groups Brave Brothers, Double Sidecick, and Shinsadong Tiger).

Brave Double Tiger is ready to start their own idol group- but they need willing participants. So they call up Ilhon (BtoB, he is also a regular on Weekly Idol) and ask for recommendations. That leads them to calling up BtoB’s Sungjae, who they tell to go buy snacks and a milk crate (because they can’t afford a chair). Sungjae does just that, showing up at their rooftop office looking like a child lost at the shopping mall. His confusion only seems to intensify when Brave Double Tiger ask him to audition and subsequently tell him they just want Got7’s number and then he can leave. Ha.

Through the first episode Brave Double Tiger auditions Got7 (by having them say a logical sentence that sounds like string of curse words), confirms Sungjae can join the group (because his parents are rich, not because of talent or anything) and then pick up two members of Vixx (N and Hyuk) after deciding it was too late to audition anyone else. 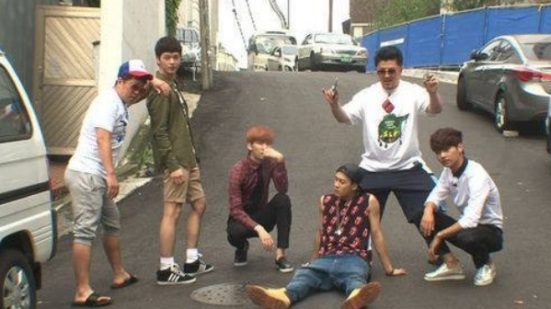 Each member signs a contract, which they are urged not to read. As would be expected of Hyungdon and Defconn, the contract outlines a pretty unfair deal (the idols are responsible for any losses from the project. In all reality the proceeds from this project go to charity). After giving the idols new stage names (one of which means belt, another means chubby) this superstar producer team is ready to shape these kids into the next big thing on the music scene.

Oh, and their group name is Big Byung. It translates to Big Water bottle. Which is great. And funny. And great. The final lineup:

Jackson (Got&) reborn as Wang Kong (translates to King Kong)

Why you should check it out?

It is freaking hilarious. This satirical look at forming an idol group is made that much better if you have watched “making the band” programs before. From dreaming big about their first single to having to work hard as rookies, the references (intentional or unintentional) are there.

This show’s humor is all about walking the fine line between the hyped hardships of idol trainees while pointing out the ridiculousness that is the reality of idol trainees (really- they practice for that long and make what money?!) Basically, Hyungdon and Defconn are trolling, with spectacular results. 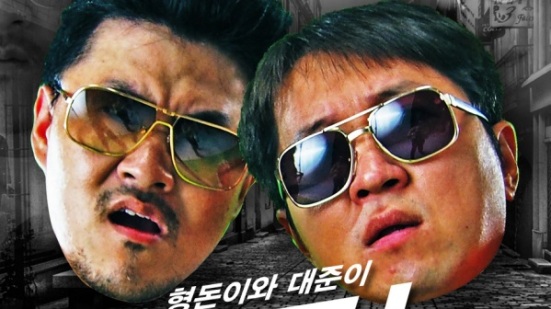 Random comedic challenges/moments make this show-The leader of this project group changes every episode, and is often decided with off the cuff challenges. At one point Hyungdon told Jackson he was “more maknae” while Sungjae was “maknae” and therefore all questions had to go through Sungjae

The producers had to hit up the idols to find a recording studio because “Even though we are producers, we don’t have one. So if you can get your company to let us use theirs we will give you more lines in the song”. The idols are usually challenged to do things “Like real men” because that is part of their concept- to be tough. Especially where eating is concerned- rip that chicken in half boys! Defconn and Hyungdon spend most of the episodes weaving between demanding persona’s and sheer laziness, all while shaping their new group into what they should be. But only after scolding the Big Byung members for doing things incorrectly.

The idols themselves are pretty entertaining . I suppose they almost have to be in order to put up with the humorously difficult demands of Brave Double Tiger (“Bring me Suzy, now- or you sing the chorus” was an actual demand on this show. Kind of /sort of on par with P-Diddy telling the newbies to get him cheesecake the middle of night, but far more entertaining and less sad).

I was not familiar with the idols appearing on this show before hand- at least individually. I basically went in blind (I have heard of their groups- N from Vixx I watched on Romantic & Idol but that was the limit of my exposure to them). But these kids seem to know where it is at- or at least are game for acting ridiculous on demand. 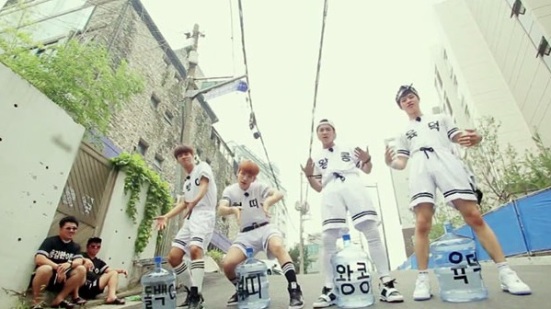 Sungjae seems to have some promising variety skills. Jackson is hilarious mostly because of how much he pisses off Hyungdon, who oftentimes looks like he wants to slap the kid. N seems like a mix of experience and naivety, while his fellow Vixx member Hyuk seems like a kid that tries but is completely lost with taking on a hip hop persona (seems like he has the cute role down pat).

Of course there are some downsides. Episode 2 was, by far, not as funny as the other episodes. It dragged to be honest. The show is clearly scripted, but if you go into the program realizing that you will save yourself some grief. But all in all, I would still say watch it. Especially if you want to kick back, laugh at a hyped up view of idol life, and not over analyze the details.

Need another reason to check it out? Look no further- here is the MV for Big Byung’s single Stress, Come On! It is so bad it is good. Oh, and there be a link to the first episode, with english subs below. Cheers!