Super Fun Drama Chat Time is baaaaack! This time around E-kun and I will be chatting up the new comedy on the drama-land block, You’re All Surrounded. Starring Lee Seung Gi, Cha Seung Won, and Go Ara the show airs on Wed / Thur nights on SBS. So far this drama is off to a solid start – chatting commences here. Cheers!

E-kun: YAS! Holla for a Dolla Cha Seung Won… Wait, why was he not in somebody’s shower?!

Lore: I don’t know…I was confused. Loved the opening chase scene. It was a nice setup of what to expect- comedy and zany antics.

E-kun: I loved the beginning chase scene. Though, I was scared when Eun Dae Goo pulled out a gun.

Lore: I was too! Like “Wow son, you um take the whole safety thing pretty lightly I see”.

E-kun: Right!? Guns are not toys, and your comrades are currently being held. But we soon discover that his character is reckless. We will discuss that later. So this is pretty much a comedy and fun ride for everyone except Eun Dae Goo, or that is the way it seems to me.

Lore: Yeah- everyone else is all slapstick humor and funny while Dae Goo is living a super serious revenge plot. Which is fine by me, because it makes this show interesting already.

E-kun: It does make it interesting… should we discuss the revenge?

Lore: Yes! Most of episode 1 was the backstory of Dae Goo (who went by the name of Ji Young as a kid). We see him 11 years prior to the chase scene living with his Mom. 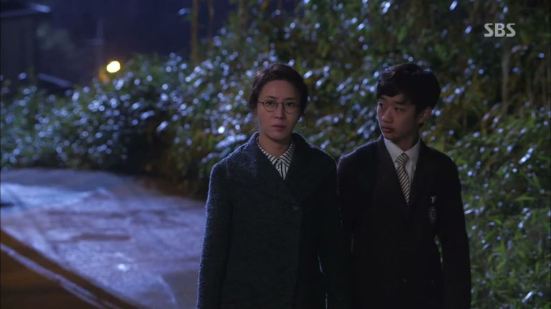 E-kun: Right, we also discover that he grew up with Uh Soo Sun (Go Ara) and she was a total and utter mess! But the real backstory is Ji Young aka Dae Goo’s mom witnessed a murder. Seo Pan Suk (Cha Seung Won) was the detective in charge of the case, asking Ji Young’s mother to testify to bring the murder to justice.

Lore: Dae Goo’s Mom was against testifying (because the murderer had threatened Ji Young’s life if she did). Mom eventually caved and agreed to testify (due to Ji Young urging her to do the right thing). Unfortunately that resulted in an intruder breaking in and beating Mom nearly to death. Ji Young arrives home shortly after the intruder steps out. He finds his Mom bloody and bruised (this scene ripped my heart out).

E-kun: Oh that was a traumatic scene! To add salt to the gaping wound, mom could have lived if Ji Young did not pick up the pendant that the murderer was looking for! As Ji Young hides under the bed, mom pretending to be dead, the murderer was 2 seconds from discovering Ji Young and mom grabbed murderer’s leg to take the attention away from Ji Young! He suffocates her to death all while Ji Young witnessed it under the bed!

Lore: What is with parents dying “for” their kids this week- first Dr Stranger and then this show? Thanks drama land for making me cry! So, Ji Young goes to his school after the murder and calls detective Pan Suk. Then the same baddie shows up and chases Ji Young around the school (while Soo Sun hilariously apologizes over the PA system, tipping off the baddie to where Ji Young is hiding).

E-kun: I KNOW!!!!!!! Parents this week get 5 stars for their amazingness! Anyway, Ji Young also told Pan Suk about the pendant and he heard the murderer mention the name detective Seo… once he avoids danger, he puts the fragmented pieces together, and draws the conclusion that Seo Pan Suk had a hand in the murder of his mother.

Lore: Pan Suk= Dirty Cop in Ji Young’s mind, which is when we jump back into the present. The four new rookies (Ji Young now going under the name Dae Goo, Soo Sun, Tae Il, and Ji Kook) show up at the Gangnam Police station, ready for their first assignment.

E-kun: And they are a total mess! Can I just ask a question that is burning a hole in my mind that is off track but I need to know?

E-kun: Is Tae Il… because my feelings are really going to be hurt if he bats for the other team. He is adorable and I don’t want to hear that right now. (lalala)

Lore: Never forget that is what brought us together again after our infamous shirtless Jae Joong disagreement of 2014. Because Creepy Noona power is strong indeed.

E-kun: It is the thing that ties all noonas like us together. We may disagree, but creepy noonas we will always be.

Lore: I feel like we need a slogan and some magic rings or something. “With our powers combined we can summon…..*insert name of creepy noona’s latest obsession here*. GO CREEPY NOONAS”

E-kun: The amazing league of Creepy Noonas! A global network so no noona has to ever feel alone. I want a picture of Seo Kang Joon on my cape! LOL!

Lore: Oh, oh! Capes! Can I put Exo on mine?! We are going to be so cool! And instead of spandex outfits (ewwww) we should always be in designer clothes. With really nice handbags. And shoes. And we can fight noona haters the world over, making the world a safe place for creepy noonas everywhere!

E-kun: Of course! And I have to always wear my heels… I have not decide whose name to encrust on them just yet.

Lore: Good point, I have to think of a shoe encrusted name too. The cape is Exo, but the shoes are probably Yoo Ah In at the moment 🙂

E-kun: LOL! I think he is close to our age though…. Anyway back to YAS. Episode 2 the group finally is able to capture the baddies from the high speed chase and book ‘em!

Lore: Oh, wow he is – he is an 86er. Never mind. Okay, so back to YAS- our rookies plus boss Pan Suk book some criminals. Turns out Dae Goo did not shoot, but used his taser instead. 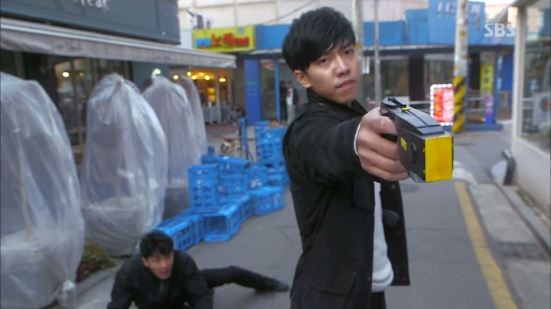 E-kun: Thankfully, but he still end up shocking another officer. Typically, you would not do anything like that, but we will let it slide. Once they try to book him, Ji Gook leaves a box cutter on the table, and the criminal escapes! I was so mad that he just sat the knife there. And then I was thinking, why didn’t they put the perp in handcuffs? Are times that hard Gangnam Police Dept?

Lore: Apparently Gangnam PD has some issues. So the baddie escapes but is stopped by Pan Suk. Needless to say the rookies get a talking to. Meanwhile Dae Goo reveals some interesting revenge behavior (like cloning Pan Suk’s phone and putting a hidden camera in Pan Suk’s apartment).

E-kun: I know! I was like really? Really?! You can go to jail for this boo! I know you are trying to get evidence, but this right here would not hold up in court. Then all the boys end up living in the same police assigned apartments. That is kind of cool they provide housing like that.

Lore: It is cool, because roommate shenanigans! Yay! Love me some roommate funny. So, after the knife on the table debacle the rookie group 4 are called into assist on an assignment – because it is in a club (and Pan Suk and the other detectives are too obvious for the undercover mission). Haha.

E-kun: Exactly, and this is what is driving me crazy Lore Unni. After they made deals and got info, why didn’t they just quietly exit the club? I hate to admit this, but that fight was initiated by Dae Goo thinking that club hoochie would give a crap about what he had to say.

Lore: Yep- it was stupid. All four of them got in a brawl with some club b****es. And then a guy got stabbed. And then they were all arrested. And then they were picked up by Papa Pan Suk and yelled at. I really would not feel safe if this was the team of police patrolling the streets where I live. I would be afraid of being accidentally shot or stabbed to be honest (yeah, I know it is a comedy, but still). 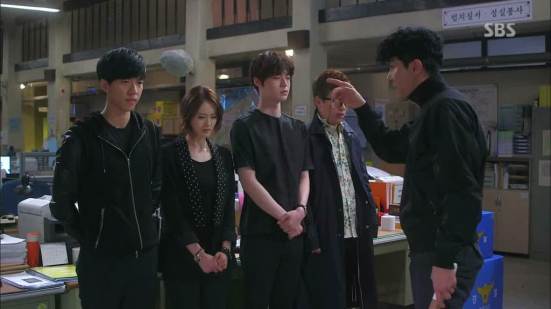 E-kun: I know! I know everyone has to start somewhere, but they were too much. I would be pissed my tax dollars are paying their salaries. So the episode ended with Papa Pan Suk tapped phone ringing and guess what? So was Dae Goo’s! How amateur can we get today?!

Lore: Yeah, how is he going to explain that one? “Oh, looks like we got a call at the same time. Um….” runs away.

E-kun: If it was once, we could roll… but their phones stopped and started at the same time! Kekekekeke this is going to be fun.

Lore: It is going to be fun! Color me happy as of the first two episodes.

E-kun: I personally do not think Seo Pan Suk had anything to do with mom’s death- not in the sense of him being a dirty cop. But I am going to enjoy how this unfolds. My favorite characters so far a Tae Il and Ji Gook! Wae? Because I LOVE a bromance! Let us hope that is all it stays as….

Lore: I agree. I can’t see him being the villain of this story, more like Dae Goo and Pan Suk joining together to find the real villain. Tae Il and Ji Gook are hella entertaining. And they must stay bromantically involved, because the creepy noona league will not stand for anything else. Overall I am in love with the entire cast, great ensemble. Go Ara is doing a phenomenal job as Soo Sun. It makes me disappointed it took AM94 to launch her into more visible roles, because this girl has some talent.

E-kun: I think she needed to mature a bit. I have seen her in some of her older stuff and it was not great. I think her character has all potential of driving me up the wall if she does not learn what the important things are. Like her getting a forensic test on the box cutter? I was like, it does not matter at this point in time who left it there, the perp almost got away and it was everyone’s fault. She has to get out of the individual mindset- but the same can be said of Dae Goo. The only difference is that Dae Goo is there for a specific purpose and needs to be a loner to “accomplish” his goal.

Lore: Interesting. I have not seen her in earlier roles, I trust your judgment. Soo Sun does have a “WTF” streak, but I enjoy the character’s comedic purpose. It looks like she is going to end up as the love interest of Dae Goo, so it will be interesting to see how this dynamic plays out (especially when she figures out Dae Goo is Ji Young from her school).

E-kun: I know… She was starting to fall “in like” with him back then. So this will be very, very interesting. Final thoughts?

Lore: I like it, I really do. An interesting show- one revenge bent character amidst a bevy of comedy. I feel like this show is going to have a lot of heart. Plus with all of the thrillers out there right now it is refreshing to see some straight up comedy. Oh- and I am in love with the scenes where the 4 rookies walk all slo-mo and bada**. It gives me life.

E-kun: I agree. Finally a show that allows me to breathe! This is starting out rather strong and I hope it continues down this path. I am excited Lore! Yay!