Yesterday, as I was falling asleep, I started to think- what is the best episode to show a Running Man newbie? I was trying to sort it all out in my head and decided last episode gave off an amazing introductory vibe without being too overwhelming in the inside joke department. I loved it. At least I think I decided that…stupid sleep taking away my Running Man pondering time!

Next Episode on Running Man….

Running Man will grow to fourteen participants next episode as seven, I repeat seven, guests take part in a couple race alongside the cast. Guests for episode 159 include Fujita Sayuri (TV personality), Jo Jung Chi (musician, also on WGM with girlfriend Jung In), John Park (musician), Jung In (singer, collaborated with LeeSsang in the past), Kim Kwang Kyu (actor, I Hear Your Voice), Kim Ye Rim (singer), and Park Sang Myeon (actor, Miracle in Cell 7). You can check out the preview below, it looks hilarious (Kwang Soo and John Park together, count me in!):

Song Ji Hyo is being courted to star in the new SBS weekend family drama Thrice Married Woman. The drama is set to premier in November. The story centers around a Mother and her two daughters, Ji Hyo (if cast) will play the younger sister to Eom Ji Won’s big sis. Time will tell if Ji Hyo will jump on board this drama, but I for one would not be disappointed to see our Ace take another drama role in 2013. 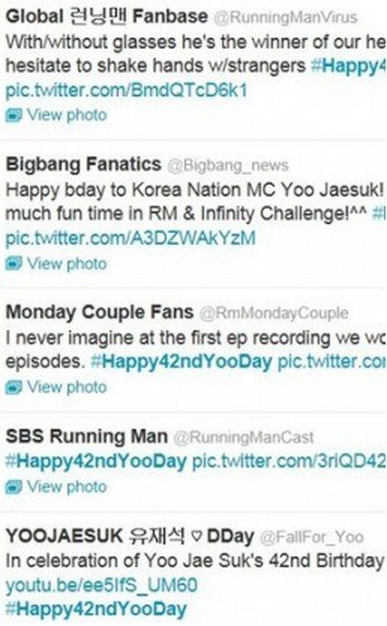 Happy Birthday MC!!!!! Yoo Jae Suk turned 41 yesterday (August 14th) and in yet another sign that he is beloved far and wide fans from all over the world took to twitter to give him a birthday shout out. The tag #Happy42ndYooDay (YJS turned 42 by Korean standards) trended in the twitterverse as Happy Birthday wishes came in from the grass hopper’s multitude of fans. Yoo Jae Suk also received a birthday cake on the set of his talk show Happy Together. Check out the pics below.

The Persieds meteor shower lit up the night sky on August 13th and one of the members of Running Man was in the mountains watching the show. Who, you ask? Kang Gary!!!! Gary took to twitter with the following:

“I saw a shooting star. I made a wish. I wished that I would make 10 million dollars so I could make a crazy party culture for the young people”

I have various mental images of how Gary would achieve the creation of a crazy party culture for the “young people” and each one of them is freaking awesome. I decided to seek out a visual to curb my overabundant scenarios and stumbled on the following. I would like to think that Kang Gary’s crazy party culture would be a combination of the following:

Crazy Party Culture Event #5-Hanging out in a trailer with Gil, becoming a lumberjack, grilling out, drinking by a truck, getting paid, and having a bonfire:

Yeah, I could get on board this crazy party culture. Sign me up!

“I am in the mountains right now and there are so many stars in the sky. It’s been a while since I’ve seen a night sky like this. I saw 40 shooting stars”

What? No wish to marry Ji Hyo? Don’t worry Gary, next time I see a shooting star I will make a wish that the Monday Couple comes true (insert delusional ramblings here, and a GIF. Can’t forget the obligatory Running Man GIF). Cheers!

Parting Thoughts, because I am still laughing at this excellent montage: