When it rains it pours. I am starting to notice a trend- at this moment there are a bazillion awesome dramas airing, a bazillion awesome varieties airing, a bazillion bits of Running Man news, a steep increase in the amount of time my grad school homework takes, the yearly gazillion hour workweek I call budgeting hell  and a steep decline in my hours of sleep. Correlation? I think so. But who needs sleep when you have Running Man! Seriously…I tried it the other day while re-watching episode 130 and I ended up finishing the show. Because it was way better than that whole rest your brain act. Cheers! 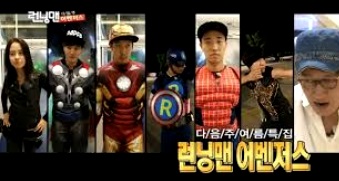 Low ratings. On that note….

I would totally watch this. And laugh.

Big brother is watching… the Running Man cast?! Episode 151 is full of security cameras and the promise of the “ultimate chaser” Jung Woo Sung (actor, Cold Eyes). This entry also features Woo Sung’s Cold Eyes costar’s Han Hyo joo and Junho (2PM). The film Cold Eyes revolves around a team of detectives that use advanced surveillance to take down a gang of bank robbers. Here is guessing a similar premise will dominate episode 151. Check out the preview below!

Episode 150- the Running Man Avenger’s Special no less- ranked last in the variety show ratings for 6/16. Newsen conducted an interview with Running Man’s head PD Jo Hyo Jin who replied to the low ratings with:

There has been much speculation as of late that Barefoot Friends, the junior program that precedes Running Man, is pulling down the SBS’s Sunday night variety lineup. PD Jo responded to this topic with:

“I don’t think that matters.  It’s something we have to do well ourselves”

PD Jo fighting! Check out episode 160 for the moment Running Man finally overcomes MBC’s adorable DWAWG kids! Okay, I admit the lack of sleep and Running Man fandom has led me to hope that we will see them face off in a an extremely inappropriate kids versus adults name tag ripping race. Does that make me a bad person? A worse person because I know those kids don’t stand a chance? Perhaps, but we have more headlines to get to before we pass final judgment!

DJ Yoo Hyuk in the house

The streets of Seoul were left at a standstill (well…at least some streets) as Yoo Jae Suk took to the stage as a DJ. Running Man’s grasshopper was busy filming a water park CF on June 16th. As part of the filming he gave a riotous performance as a DJ- a free show for anyone who happened to wander by. Why did my June 16th not involve this! Seriously!

Running Man’s giraffe has been busy guesting on tvN’s Monday/ Tuesday drama Dating Agency: Cyrano as a love sick pastry chef. Tuesday’s episode saw Lee Kwang Soo’s character reach his goal of dating the hostile chef he likes. They shared a cream kiss a la Secret Garden and it could not have been more adorkable. If you have not watched Kwang Soo’s appearance on this show I urge you to check it out- if you do not laugh at his character I will be surprised. Check out cuts of his appearance on the show below:

How much green does a grasshopper make?

The nation’s MC and his salary was a topic of discussion during the recent episode of Infinity Challenge (YJS and Haha’s Saturday night variety program). During the episode the cast of comedians discussed their forthcoming summer special. Yoo Jae Suk announced that he would foot the cast bill for the special. Gil, Gary’s other half in the hip hop duo LeeSsang replied by telling the group that YJS should be let off the hook- he does not make that much money anymore. Park Myung Soo, the big nose hyung of Infinity Challenge disagreed and said that YJS makes far more than fellow cast member Jun Ha. Jun Ha replied:

“I have to go on broadcast ten times to match one of his appearances.”

Looks like the grasshopper may not like green but finds it liking him instead. But hey- this guy works super hard and is humble all the way. If there is one celebrity I think deserves the big bucks it is this guy!

Speaking of Infinity Challenge the cast of the show was hired earlier this year by Coca Cola to appear in several advertisements for the brand. The most recent CF is out and it is hilarious. Check it out below:

Making their comeback (their last release was last year’s Busan Vacance) HaHa and Skull will release the album Reggaerilla on June 27th.  Check out Haroro’s upcoming album preview below:

After School’s Lizzy appeared on the June 19th episode of Radio Star. During her appearance she explained the reason she left Running Man (and her subsequent depression over her departure):

“I got depressed after leaving ‘Running Man’. At first, I was just a guest, but I thought I did well because I eventually joined the cast and became a permanent member. But even then, I was edited out a lot from the scenes, and articles were popping up saying I wasn’t a permanent cast member but just a long-term guest.”

“After I left, people asked me, ‘Were you fired from Running Man?’. I left because of my schedules filming for a sitcom, but I was hurt because of the response I was getting. I think I was even more upset because it was my first variety show in which I was a permanent member.”

“I had a hard time back then, but I’m fine now. Also, Yoo Jae Suk oppa talked positively about me after the Entertainment Daesang, so I was completely good after that.”

Lizzy also said she would come back as a fixed cast member if she was ever asked. This bit of news- more specifically her depression over leaving- got to me. I liked her on the show and honestly never considered how she felt when she left (call me shallow but after only a few episodes her departure had nowhere near the effect on me that Song Jong Ki’s did). Lizzy-Hugs!

The cast of Running Man is headed to China! Even more awesome is the fact they are visiting to attend the 3rd Asian Dream Cup! Episodes 96 and 97 featured Korean soccer super star Park Ji Sung as he played along with the cast to see who could win a spot at the 2nd Asian Dream Cup (spoiler- it was Gary and Kim Jong Kook). The upcoming special will apparently follow up to see who will qualify to play at this year’s Asian Dream Cup (Lee Kwang Soo, Lee Kwang Soo, Lee Kwang Soo. Sorry, a weird soccer cheer snuck into my typing). Ji Sung and the cast started filming on June 19th in Incheon and will make their way to Shanghai where the soccer tournament will be held on June 23rd. Check out some BTS shots from Incheon below: 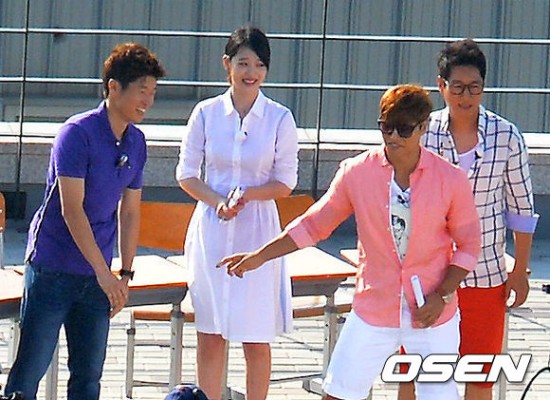