I think a ramble per episode is in order. Because after an hour with Jang Ok jung all I want to do is talk about it. And watch the next episode. And talk about it some more. Aishhh! I heart you show. 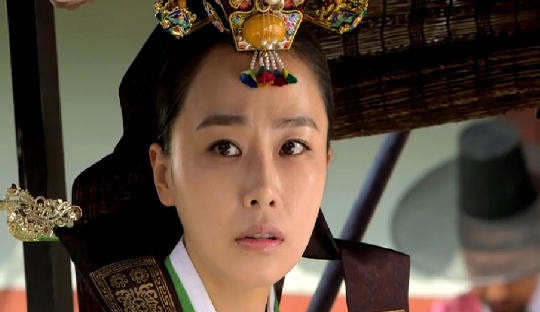 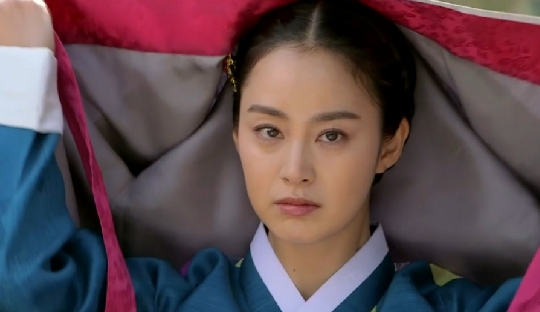 Jang Ok jung pledges allegiance to her scheming uncle in exchange for reentry to the palace. We find out that the Queen encountered Ok jung on her way to the royal wedding and ignored her- a violation of her promise to find Ok jung for the King. The wedding takes place however the newlyweds do not spend the first night together or the second. The couple’s lack of affection delights the Queen Dowager- who fortuitously also learns of Ok jung’s whereabouts. 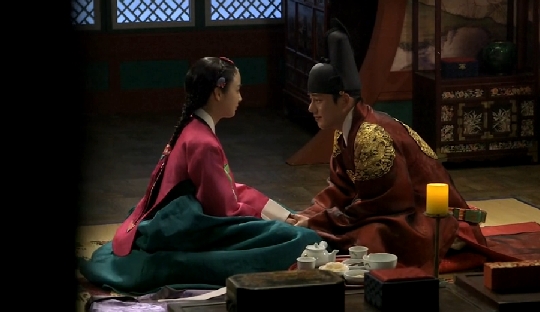 Taking a queue from one of her earlier ploys the Queen Dowager arranges for the King to meet Ok jung over tea. They joyously reunite and Ok jung fills the King in on everything that happened since their last meeting-except the incident that found her being locked in a burning house. 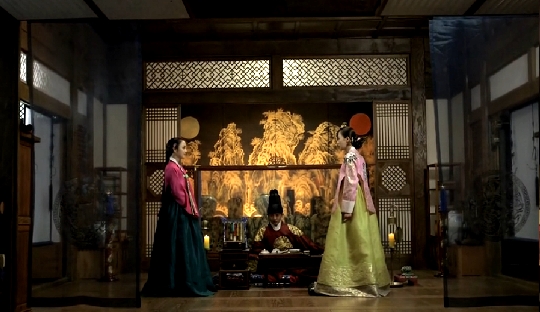 The King calls the Queen to his bedroom (much to her delight) in reaction to Ok jung’s story of seeing Queen In Hyun during the wedding procession. The Queen is disappointed to find that the King is not in the mood for love but instead wants to talk about her promise to find Ok jung. The Queen is further surprised when the King calls for Ok jung and the two woman are forced to face each other, ending in the Queen being left no choice but to appoint her husband’s mistress as a court lady. 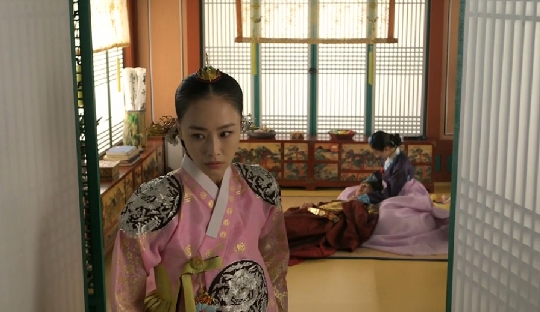 The Queen keeps her promise and Jang Ok jung is appointed a special court lady in front of the servants of the internal court. The Queen Mother scolds the Queen for letting Ok jung into the palace. Later the Queen witnesses the Kings affections for Ok jung and revels in her regret. During a visit to the tailor’s chambers Ok jung encounters Prince Dongpyeong and explains her need for power, the Prince seems disappointed in her turn of motivation. 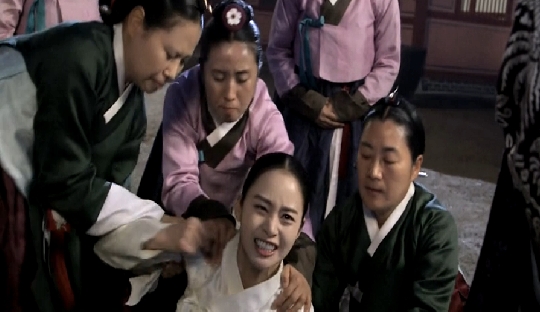 The Queen Mother, egged on by the Western party, decides to ensure that Ok jung will not bare the King a child (given all of the late night visits his majesty has recently been making to his favorite maid). She has Ok jung kidnapped and dragged to a place in the palace with an end goal of making Ok jung drink medicine that will make her infertile. Meanwhile the King goes to visit Ok jung and finds her room in disarray. At the same time the Queen Dowager receives word of Ok jung’s mistreatment and rushes out to stop the infraction. The King runs out of Ok jung’s chambers only to hear his beloved scream for help- the medicine being forcefully pushed towards her mouth. 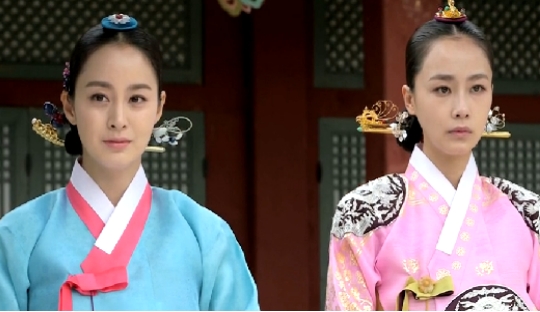 I love how selectively evil Jang Ok jung has become. I was nervous that we would see a complete moral switcheroo as of this episode- after all we have had ten episodes of our heroine acting like nothing else than a constant suffering angel. My fears were unfounded; the writers gave us a slightly morally morphed heroine with actions that were fully supported by the many times people tried to f her over. When she stared down the Queen with that “I know you know biotch” stare I got it- after all it was only a few episodes ago our Queen left Ok jong in the dirt as she proudly entered the palace. And the whole “I need power to win” Prince D speech was also logical given her circumstance- after all she was thrown in a burning building for being a powerless low class maid. In my opinion we dodged the heroine going from making quilts and petting kittens to kicking puppies (thankfully relegating my fear). 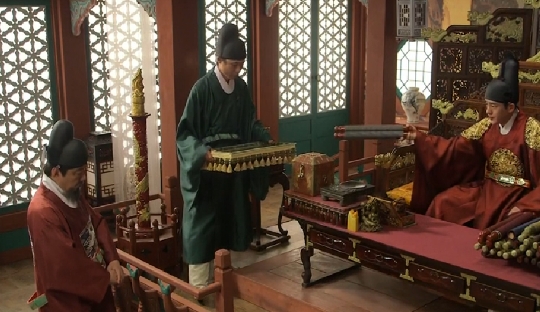 This episode also highlighted the innovative political tactics of the King (supported by history which describes the monarch as extremely politically savvy). JOJ presents a fictional imagining of the real man that gives us a good taste of his plotting and maneuvering. My favorite example this episode is when he finds, via our Queen Dowagers help, Ok jung and he beckons the Queen to his bedroom (no less)…all because she said she would find Ok jung herself- and lied about it. In a move that had me gaping and smiling he used the situation to force the Queen to facilitate his mistress’s position at court-in other words-time to live up to your end of the bargain my dear. This situation was a snippet of how he is playing the Southern and Western parties against each other (note the ambassador to China for another instance). Because of a lesson learned as crown prince the King is facilitating a situation where the power that lies with the parties is centralized to the throne; made possible by the opposing groups desire to destroy each other. Power struggle indeed. 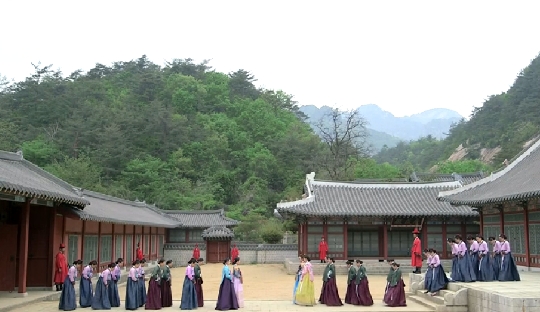 Episode eleven also gave us a good taste of the internal court- a highly structured world of precedence and ritual. Jang Ok jung entering the environment caused a tidal wave- celebrated by the Dowager Queen, hated by the Queen Mother, and stupidly arranged by the Queen herself. With four powerful women fighting for supremacy this episode gave us anything but a calm and orderly atmosphere among all of the hair ornaments and infertility meds. 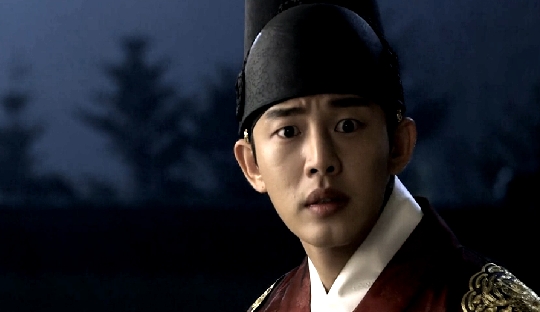 The ending of this episode was my favorite moment- a call for a situation that has been built up since Jang Ok jung entered the palace. With everyone hating on his woman how will the King standup and take charge (my guess is via awesome plotting by the man himself)? And more importantly will our heroine be knocked down a peg towards her goal with the inability to bare a royal heir?! Episode twelve, why are you so far away…..