Haechi- The symbol of Seoul since 2008.  While not a drama star I nominate the Haechi as a genuine k-drama paranormal mystery based on the number of shows set in Seoul. Yeah, I am that petty. In all actuality I have always wanted to write something about the Haechi. They are like unicorn lions! Freaking daebak!

Watching over the Gwanghwamun Gate, the entrance to the most important palace in the Joseon era Gyeongbokgung, is a fearsome Haechi. During the 15th century the mysterious Haechi became protective spirits, saving dwellings from fire and disasters with their eternal sentinel. In fact, the Haechi still stand outside of Gwanghwamun Gate, no longer protecting the palace (fire and war took care of the royal residence generations ago). Silent stone guardians, the Haechi are still present in their watch outside of Korea’s historic royal residence. 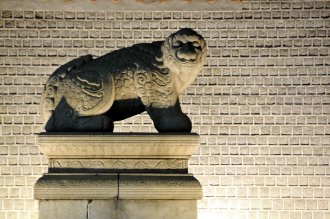 In 2009 Seoul took the plunge. For years the large Asian metropolis had realized it needed a make over. An icon of the city was just what the people of Korea needed. But where to start? After polling the populous the Seoul officials realized the number one vote was for Gyeongbokgung Palace as a cultural symbol of the city. The palatial residence was too large to graphically represent the city so Seoul chose the guardians of the palace as their symbol- the protective half lion half dragon Haechi. Seoul has a claim to this mythological image after all, 90% of the traditional Haechi statues are found in the city proper.

As Seoul moves further into the 21st century the Heachi, mythical fire eating watchman will be its symbol. A strange creature, a noble creature, a fascinating creature, I look forward to seeing more cute Haechi cartoons from Seoul in the future. Fighting!