Here we are again with another edition on Super Fun Drama Chat Time: Joseon Gunman halfway chat! We are both enamored by how much we love this drama. When you have a great story, beautiful scenery, and bomb acting, it is hard not to fall in love! What are your thoughts on Joseon Gunman? Leave us comments below! Peace!

Ekun: I am having Joseon Gunman’s BABY!!!!! That is how much I love this show.‏

Lore: Oh my gosh! Is it a boy or a girl?! I am assuming you will name it Lore Joon Ki, because I know I would. Wow, this is just amazing. I mean you are the first one to have a kid that does not walk on four legs and meow or bark or appear to be a cute pair of shoes! Wait a minute…you tricked me?! You just love this drama, don’t you?‏

Ekun: I do, I do! We are halfway through the show and I am still in love with it. The cinematography, the characters, Joon Ki Oppa riding horseback with a gun… what is not to love? ‏ Wait, did you think I was really preggers?‏ 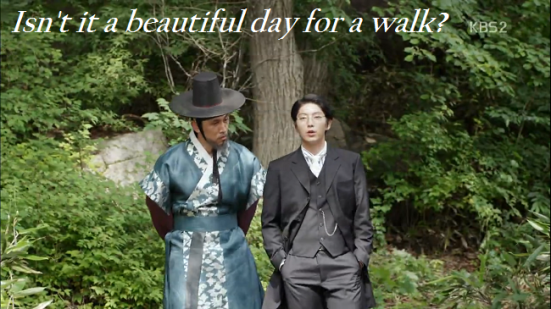 Lore: LOL! No, I was just teasing you :-)! I agree, there is so much to love about this show. Each episode that I watch seems to get better and better.‏

Ekun: I know, one thing I am confused about it why Yoon Kang came back. Of course for his sister Yeon Ha, but outside of that, is it for revenge against the whole conspiracy against his dad or just to take care of Won Shin and the rest of the corrupt gunmen?‏

Lore: I think it is a little bit of both. He is seeking revenge and he is also out to crush the corrupt gunmen. The web of intrigue in this show is hard for me to follow sometimes. So this is what I understand so far (let me know if you caught something else): The Scholars, and Yoon Kang’s Dad were killed due to an anti-reformation movement within the palace officials. The officials who were against the reform were using gunmen supplied by a merchant’s guild. As Yoon Kang returns he tries to prove that the merchant guild killed his Father, but he has yet to discover the mastermind of the operation (the elder palace official). ‏

‎Ekun: That sounds about right, I think you got it all in a nutshell. Corrupt officials trying to keep the poor and ignorant, poor and ignorant. I think the thing that always annoys me with these particular time pieces is the lack of power the king actually has. I understand we all have to work together—but what is the point of a monarch if the person is charge has no more power than a commoner on the street. I can’t be king, because I would have killed Vulture looking gramps long ago.‏

Lore: Haha, yeah I would have too. I think the amount of power the monarch has is really dependent on the time period, at a certain point the court became more powerful than the ruler. Not that I am an expert, but the books I have read on Japan and China have highlighted the same thing—how warlords (in the case of Japan) and the palace officials (in the case of China) can actually overpower the monarch. But I agree it makes no real sense when you think about it. The king should be the one calling the shots!

Ekun: Agreed, and now the king has finally decided to take back power and created a “task force” of sorts; to pave the way of the enlightenment and build up forces to serve and protect the people of Joseon. Not like cops and whatnot, but idealistic thinkers who want to improve the quality of like in Joseon; like Kim Ho Kyung, and Soo In’s father Jung Hwe Ryung.‏ 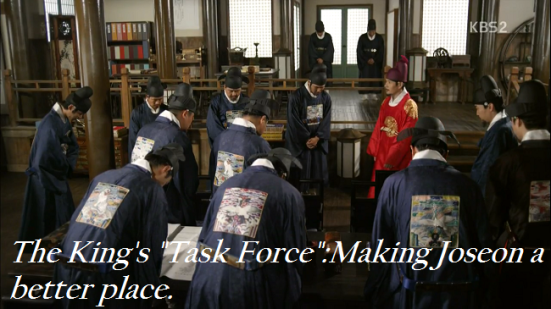 Lore: Yes, and the anti-reform officials and their hired guns are none too pleased. I am fully expecting Soo In’s family to be ripped apart by everything.

Ekun: Speaking of gunmen, we find out a bit about Won Shin’s past as a slave when he confronts Vulture dude… thoughts?

Lore: He was a slave, I forgot about that! His past definitely colors his present day actions, especially regarding the way he is treated by the court officials. I would be lying if I said I did not feel bad knowing he used to be a slave.

Ekun: I most certainly felt a twinge when we find out where he came from. He is more or less a victim of circumstance.

Lore: No one should ever be subjected to that. Still he should not go around murdering people. A wrong future is not okay because you had a horrible past.

Ekun: Agreed. Two wrongs never make a right, even if you have a deep seeded reason. Keeping it moving along… Soo In.

Lore: I was surprised and scared when Soo In was taken in for interrogation. It could have been the thing that ripped her family apart. ‏ 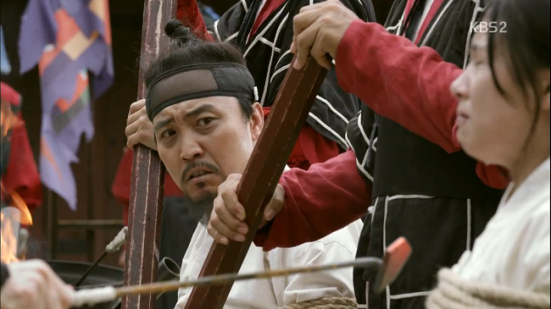 Ekun: Let’s discuss the whole reason for this interrogation: Yoon Kang was finally able to rescue his sister from the clutches of the pedophile Song! Because he asked Soo In to make the smoke bombs, she was suspected to have something to do with the death of Song. Did he really kill him or was it one of the other gunmen?

Lore: I honestly do not think he killed him. Yoon Kang is full of anger about his Father’s death but he has purposely avoided killing anyone for it (the gunman in the forest killed himself, and Yoon Kang had every opportunity to kill him if he wanted to). ‏

Ekun: That’s right; he did say he would not kill with a gun if he did not have to. Anyway, Yeon Ha is safe. Soo In was caught and Ho Kyung’s father jumped at the chance to turn this into an opportunity to get rid of Hwe Ryung by using his daughter. Hence the torture scene with Soo In and her father‏.

Lore: That was a brutal scene. But if there was one good thing to come out of the horrible interrogation it was Yoon Kang’s facade softening towards Soo In. I need these two to get back together!

Ekun: In due time Lore! I was glad with her reaction to finding out he was Yoon Kang! I don’t really know what I thought she was going to do, but I am glad it has panned out this way at the moment. He is on a mission and I think she gets that. But if she starts to talk silly after a few episodes, I might have to cut her loose. But I am going to try really hard to be optimistic!‏

Lore: True, things need to happen before these two rides off into the sunset together. I like how Soo In reacted as well—she let him know she knew without throwing herself at him and screaming “I know who you are!”. It is for the best that they take it slow, especially given the environment (and turmoil) they exist in. So, what are your thoughts regarding Choi Hye Won? I have a feeling she is about to become a force to be reckoned with (more so than she is now) and not in a good way. When she walked in on her Father bowing down to Yoon Kang the look on her face was not pretty.‏

Ekun: It is that amongst other things. I feel like she is starting to catch on to who he really is and this will not go over well. Or, she seems to be interested in “Hanjo- san”, and his outburst while trying to give his statement towards Soo In was a little extra. Either way, you can feel how she is melting over to the dark side. I find her to be a pragmatic character, so unless she does something hella BSC, I will not be mad at her.‏

Lore: That is what I am afraid of – that she will go completely BSC. She is definitely showing signs of going to the dark side, and that is kind of scary. So what other bits of goodness should we discuss? I feel like there is just so many positive things with this drama—I am in love with the writing, directing, acting—all of it!‏

Ekun: I know right! Just one more thing of concern—so far I am loving the “kiss my a** attitude” Ho Kyung gives his father. But I am afraid it is not going to last! In order to get that love and affection from old papa, he can become a questionable character. Other than him flipping the script on us, his character is kinda moot or something. What do you think?‏ 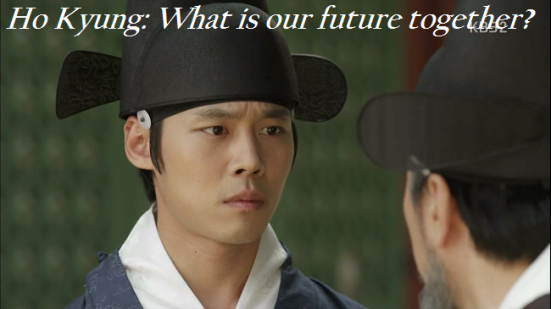 Lore: I would agree, he is moot at this point. I expected him to become a viable love interest for Soo In, but it is pretty clear that she isn’t interested (I mean, she is still in love with Yoon Kang and all), and he will not push for anything more(unrequited anyone). He stands up to his Dad, which seems to indicate he will stay one of the “good guys”. I think that there is going to have to be a major plot development for his character to become interesting, or more than just a side character with negligible influence. ‏

Ekun: Exactly. So back to the sweet candy cane and lollipop momo’s in the show. Yoon Kang “saves” Soo In from her “bomb” explosion.‏

Lore: Swoon. Yes, he did and it was one of the first moments that it was painfully obvious that his instinct (to protect Soo In) could pull him out of his assumed identity so quickly.‏

Ekun: I know, let’s not forget the bromance reunion with Jung Hoon. I cried when he finally told him. It was a smart move on Yoon Kang’s part to let him in on it.‏

Lore: Yay for the bromance! I think it was a good idea as well, best to have at least one friend that you can completely trust in on the plan (well, part of the plan any way). ‏Now that we are on the candy coated in love with this show kick I have to say—visually this show is stunning. ‏

Ekun: Oh my, you are completely right‏! The costumes, the scenes, everything is so pretty to look at.

Lore: Should we do final thoughts?‏

Lore: Final thoughts: I am in love with this drama, it has done no wrong in my books. The acting, writing, and directing are solid. We are only halfway there, so a lot could go wrong. If it does you can find me under my dining room table, rocking back and forth. Because I believe in you show- don’t let me down.‏

Ekun: Show, now that we are having our baby we cannot mess up a good thing. I am committed to you, do not run out on me and do BSC things. Let’s stay together until the show comes to an end, ne? *Singing Daley’s Love and Affection*‏