Do you ever just stop and think “Wow, that made no sense”. We do, especially when assault charges hinge on a piece of paper that basically says “Hey- it is totally fine you punched me. Hugs!” We are not lawyers or anything but we are avid drama watchers (is this like “I slept in a Holiday Inn last night?). Won’t you ask these questions with us? Time for this week’s Super Fun Drama Chat Time: You’re All Surrounded. Cheers!

E-Kun: Let’s do this! Dae Gu is posted outside of Yoo Ae Yun’s house… Go!

Lore: And we find out Ms. I hit-people-with-designer-bags is the daughter of Assemblyman Yoo?! Huh….I was thinking wife. Not sure on the age gap between the actors but I was really thinking he is not old enough to be her Dad, but whatever. Oh, and she has a son that has a man crush on Dae Gu. But what is important is Dae Gu doesn’t really get anywhere questioning her other than letting her know he will not back down until she is charged. All of which makes Papa Assemblyman pretty upset, because it is his political career on the line. Maybe you should have taught your daughter how not to assault people, Mr Assemblyman? Just a suggestion.

E-Kun: Exactly! All the mumbo jumbo tied up with this case was ridiculous! We had on video that she was abusing her. Get the warrant, arrest her, and make her pay for her crimes. I was so furious at this case in these episodes I had no idea what to do with myself. 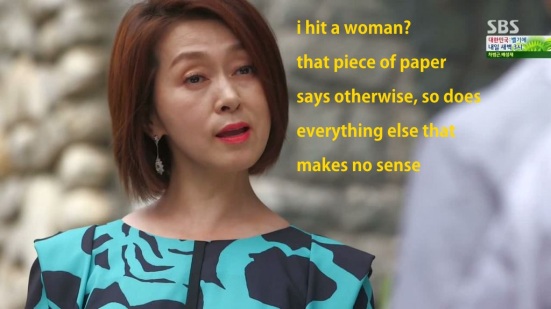 Lore: You and me both. I am not an expert when it comes to Korean law (or any law for that matter) but it seemed like this should be a pretty easy case as it was caught on video. I was surprised when everything basically hinged on the settlement document that Soo Sun’s Mom was forced to sign. I was not aware that you could sign a settlement document to forgive an assault. Seemed a bit strange… “I know you just beat the crap out of me but I forgive you. Hugs” Hmmmm *side eyes show*

E-Kun: It wasn’t strange, it was unacceptable! This violates human rights in general. If people had the ability to do something like that… Aish! But it was just a boo boo move and I am mad she got away unscathed. *kicks a cat (I didn’t really kick a cat everyone)* What did you think of Tae Il and Mama Cop?

Lore: Not only does Tae Il slay the noonas (please pat his head for me k? Oh, and let him know I will pick him up at 12:00 sharp for his week in my pocket. Thanks!) he also loves the noonas. There is a god in drama land. There is! I have seen the light!

E-Kun: Look, when he told Papa Cop what he was up to I just couldn’t. I don’t like when boys try to be grown men. It makes noona’s heart flutter and get nervous.

Lore: Did you pat his head? Have you given him his special Tae Il food today? I mean, not to worry or anything but he really likes ice cream and I know he pouts if he doesn’t have at least one ice cream cone a day. 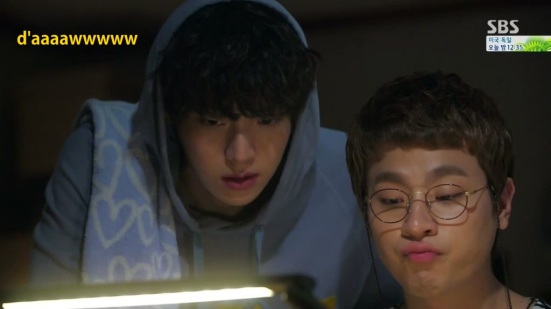 E-Kun: We have had all sorts of snacks and treats today. I patted his head and getting him ready for bed. Ji Gookie came over and he has had a long day.

Lore: Oh, I bet he is tired then. He is just so adorable when he sleeps! *I should probably stop being creepy now. Yeah, definitely should shut down creepiness. Okay and go* Yeah, when Papa Cop saw Mama Cop hugging Tae Il I wanted to shout “Noooo, don’t misunderstand!” I really do not want anything getting in the way of Mama and Papa Cop’s relationship (these two have been through enough). I was happy with how this point was written- Papa Cop reacted true to his character as did Mama Cop. Yet nothing was totally lost and the happy cop family was not broken up. Yay! 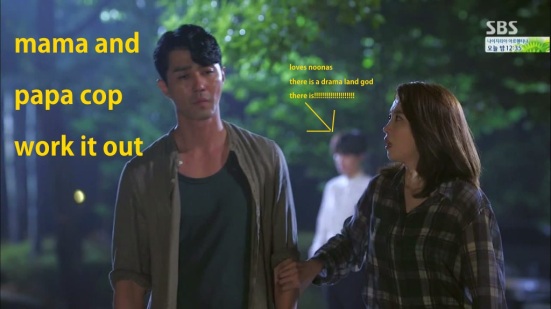 E-Kun: I was happy too. If things had gone sour I would have called our pilot to gas up the jet to make a visit to Korea. Moving along- Yoo Ae Yun had a background check done on Dae Gu and is terribly frightened at his existence… She totally has something to do with his mother being killed! What if she was the first killer?! Being as though she likes to beat people, this is extremely plausible, ne?

Lore: I think it is extremely plausible that Yoo Ae is the first killer. Is it just me or do you suspect that Dae Gu’s Father is going to be revealed soon? It may be a moot point, but I can’t help but think it has something to do with the larger conspiracy…or I watch too many makjang dramas. Either one.

E-Kun: No, I think you are on to something. You remember when that one guy was talking to Shady Suk and he mentioned a birth secret? I think it was a foreboding that we should not really take lightly.

Lore: I think Papa may just be our Assembly man. And I fully expect a “Dae Gu, I am your Father” bit- without the Death Star (bad Star Wars Joke ending here). Though I do hate thinking Dae Gu is related to that purse slinging witch. But I guess, the apple can fall far from the tree.

E-Kun: I think that is how it could go down too. Or maybe they knew Dae Gu’s papa and he was in love with his mom but he was supposed to be with Cray cray daughter! The possibilities are endless.

Lore: Oh, oh! I like that idea better. I could see that being the truth! And the son character might make more sense if he is Dae Gu’s brother (because right now he doesn’t seem to have much of a purpose, granted he was only introduced in the last two episodes). So, we had another park bench nighttime chat that took place in episode 13- Shady Suk telling Soo Sun to close her Mom’s case. Thoughts?

E-Kun: Girl! *Ekun’s hoodgirl voice with hand motions attached* How can a person be so shameless and selfish?! This is one of your subordinates who looks up to you as an authoritative figure. You have the nerve to actually ask her to give us on a case?! And that one rat bastard talking about people being murdered, raped, etc. but the Gangnam PD are only focus on this case?! Soo Sun’s momma is a person who was violated! What are you saying dude?! *tucks hoodgirl back in* 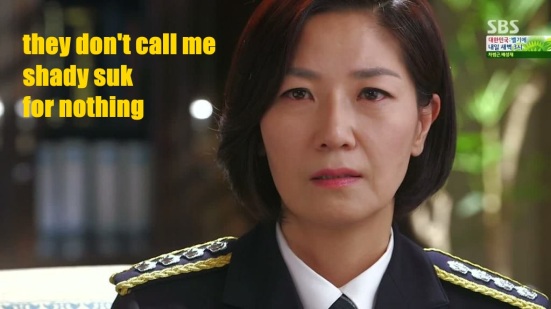 Lore: Yes! A thousand times! It was a horrible thing for Shady Suk to do (guess she earned that Shady title a few times over). I was even more annoyed when Dae Gu confronted her and she played the card of “Oh, I was wrong. Thank you Dae Gu for stopping by and in three minutes of voicing your disappointment showing me the true path- now I am a good person with a soul.” Yeahhhhh……I don’t really buy it.

E-Kun: There is no reason to invest in her because wolf tickets (slang for the like the boy who cried wolf) are for suckers! Shady Suk don’t have a soul. I mean, is she really just doing all this for the accolades? I feel like there is something more! What else happened this episode?

Lore: There is something more to Shady Suk, I can guarantee it. Let’s see- the cops run around trying to secure a witness that will prove Soo Sun’s Mom signed the settlement papers before the assault, the rookies (less Soo Sun) start an adorably dedicated internet campaign to have the video of the assault taken down (so Soo Sun’s Mom will never have to face the shame), Assemblyman Yoo apologizes to Soo Sun’s Mom so she will drop the charges (which she does, because she thinks it is best for everyone), oh and Soo Sun and Dae Gu KISS (during the most conveniently random undercover operation ever)! Whew. Yeah, I think that is most of it.

E-Kun: Dae Gu! If you never did anything right in your life, that kiss was it for this Noona! And I am not even all invested in you and Soo Sun like that (Kudos Lee Seung Gi.. you made of for the tragedy over in Gu Family Book)!

Lore: Woah, woah, woah. I loved the kiss but I cannot claim it made up for GFB. I still have a scar over that one (there is one good thing about it and that was Papa Gu). Loved the kiss though, especially how Soo Sun was like “I’ll do it, just stand back” and then Dae Gu went in for the kill. *Swoon*

E-Kun: Oh, I meant that sorry kiss with Suzy… He is going to have to do some deep acting to erase GFB from my mind. Hands down Gumiho Daddy was the best thing about that drama! Final thoughts?

Lore: Okay- then agreed! Totally makes up for the Suzy kiss. Final thoughts- Mama and Papa Cop: Love how your relationship rebuilding is not faltering. Get back together you two! Dae Gu- Shady Suk is evil, don’t trust her. Punch her in the face with the law. Soo Sun- Still love you Tae Il and Ji Gook- You two…d’awww *pinches cheeks* Assemblyman- *Sigh, deep sigh*

E-Kun: Dae Gu: Two cookies? Someone is trying to do better, but no dice! Mama and Papa Cop: Please work it out! Assemblyman and family: *side eye* Tae Il: Noona can’t, but I will for you!

Lore: This noona seconds this statement! Get back in my pocket Tae Il!