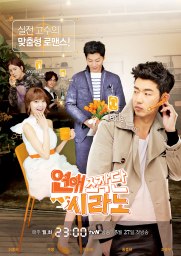 The newest entry in the tvN Oh boy! series of dramas; Dating Agency: Cyrano, is up and running. Having premiered on May 27th, Cyrano is based on a 2010 film starring Uhm Tae Woong and Park Shin Hye. The show airs Monday and Tuesday nights and will consist of sixteen episodes.

Cyrano is the story of a dating agency on steroids- staffed by flower boys that used to work in theater (really- does such a place exist! Are they hiring?). The leader of the agency, a calculating fellow that goes by the name of Seo Byung hoon,  is portrayed by none other than Jun-su’s dad Lee Jong hyuk (sorry, had to throw in the DWAWG reference).The titular dating agency helps their clients hook up with the one they are pining for via elaborately crafted scenarios. While executing a plot in the name of one of Cyrano’s clients Byung hoon becomes acquainted with the feisty and perpetually honest Gon Min Young, a woman that is his direct opposite in regards to the dating game. 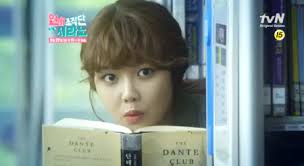 The heroine of our story, Gon Min Young, is portrayed by SNSD member Sooyoun. Min Young is a romantic to the core and follows her belief in true and fateful love while working in the dating agency arena. Through a series of unfortunate events she finds herself unemployed, with Cyrano Agency asking her to join their ranks.

The way that Min Young believes in romance clashes immediately with the way Cyrano handles love- while Min Young has operated on the assumption of fateful connections and minor procedural oversight, Cyrano has approached the dating game with a methodical and technological drive for success and monetary payout. One thing nags at Min Young as she becomes more acquainted with Cyrano: how can a dating agency operate with no heart?

This is an Oh! Boy production so we have our mandatory set of flower boys (not that I am complaining)- Moo Jin, played by Hong Hong hyun, and Ah rang, portrayed by Jo Yoon-woo. The duo work at Cyrano and assist Byung hoon with his detail oriented operations. Next door to the dating agency is a restaurant, owned by Cha Seung-pyo (Lee Chun Hee, aka Chunderella), a mysterious man that seems to know everything about Cyrano.

With two episodes aired thus far I am finding this show mindlessly lighthearted- which is actually not a bad thing. This is a romantic comedy and the show is doing its job, from the outlandish to the cute and funny I am not disappointed having gone into this drama with its genre in mind. It seems like there are too many bad rom-coms out these days, tvN proves with Cyrano that as a network they know how to give us a good production in this genre. 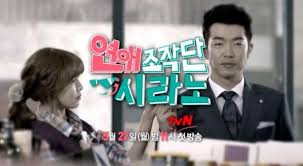 The look of this show is hard to pinpoint. The closest I can get is to describe Cyrano as having a poppy noire feel (I am pretty sure the poppy feel and the noire feel cancel each other out but I can’t figure out any other way to describe the visuals of this show). Maybe it is because the agency’s first full client setup played out like a 1940s crime film or maybe it is the dimly light theater offices of the Cyrano agency, all foggy and mysterious and all. Adding to the atmosphere are the floral prints and eclectic wardrobe of our characters, displayed in tandem with the detective spy feel. All of which makes me want to say, um… poppy noire. Regardless of what the look of this show is called I am really enjoying the sets and their pulp comic look. While not a masterpiece of set design it is fitting and freshly interesting for a romantic comedy like Cyrano.

I have been waiting for this show to premier since the first time I heard the words “New drama in Oh! Boy series”. Yes, I love me this tvN feature. My only grief thus far (and technically this is more of a complaint about the series not this show exactly- because this show is not a disappointment) is the ongoing direction of Oh! Boy programming.  Here comes the ramble:

I feel like viewers are long overdue for another drama in this series as strongly written as Shut Up Flower Boy Band. I understand that the goal of Oh! Boy is to appeal to the teenage demographic, unfortunately I think tvN believes the teenage demographic only likes watching the light and fluffy (and when I was a teen I think I could handle things that were a little, how do I say it.. more deeply played).  Not to hate on the network -because I really do love 99% of the shows they put out, but I hope the next Oh! Boy show takes on subject matter that is a little more substantial: it does not have to be a melodrama (no, I beg of you, no) but at least a half fluff half character growth bonanza. Because I would be really, really happy then. Just don’t cut down on the flower boys, whatever you do.

In parting, I thank this show for introducing me to the best Rubik’s cube ever- I know I can solve it in ten seconds. I am going to look like a freaking genius! One shade of grey- at least according to my screen and/or imagination (probably my imagination, but hey, a girl can dream). I can match gray with gray any day-why didn’t I think of this earlier! Cheers!

One thought on “Love is an operational thing or First impressions of Dating Agency: Cyrano”