So you think you can dance? Well- you probably can- at least better than 80% of the cast of Running Man.

One of the things I love about Running Man (and pretty much only RM, not a big dance fan) is the dance sequences. Time and time again the cast brings out the same dance moves to hilarious effect.

If you are new to RM the dances may be a delightful surprise…hell, even if you are not new to RM they are freaking funny. Henceforth are the favorite dances of our hopefully never formed dance troupe, Dance-Running-Man-Dance

Kwang Soo- Is That a Robot or a Sick Monkey?

This one gets me every time. It is a weird mixture between a robot dance, some kind of oily hinge Wizard of Oz Tin man routine, and just plain weirdness. The best use of this dance was at the 2011 SBS awards. Nothing says dancing fool like an awards show. 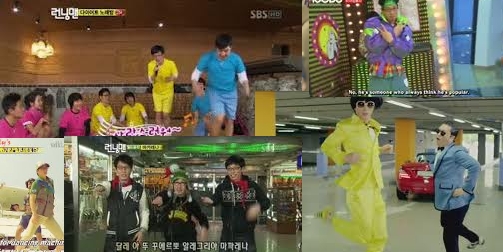 The nation’s MC knows how to move it. Whether doing his signature grasshopper dance in a dance off with Psy or showing the meaning of dance lightning, Jae Suk never fails to deliver. In episode 18 Jae Suk reached a pivotal point in his dancing career, acting as Yoo Hyuk the too-cool-for-school dance club president. Hence his lightning dance power was first displayed- and Yoo Hyuk the dancing machine was born. Thank you episode 18, thank you.

4minute + 2009 = The advent of the Hot Issue Dance. Ji Hyo seems to have taken this to heart, appearing on Family Outing moving to Hot Issue she strengthened her H.I. dancing mastery through Running Man. As the episodes go on it has become apparent that Ji Hyo, even if she played a ballerina on T.V., never fails to fall back on this dance. Hot Issue fighting! 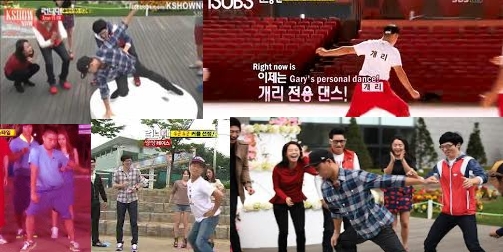 Peaceful Gary can break dance like a…like a…butterfly? Like a butterfly! Seriously, in episode 5 the daebak Gary Butterfly was born. Dance butterfly dance.

What can I say? He was good then and the man still has it. When dancing comes into play, JKJ can often be found going back to his dance group days (over looking his occasional hip hop outbursts), busting out the Black Cat. Every now and then he even goes back to his X-Man days and does his weird sway dance. Either way I am too busy wondering what his abs look like to care.

From Haha’s days on the now defunct variety show X-Man (alongside JKJ) he has been parodying Turbo dances at every turn. Anytime we see Ha-ha and Jong Kook busting out mad Black Cat moves we have a recipe for a great episode. 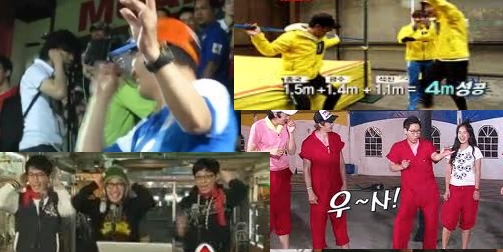 Ji Suk Jin- Is that a pitch?

Always endearingly awkward, big nose Hyung can’t help but dance the dance. The dance of weird hand motions that is, aka his Woo Sa dance.

So, now that you know the dances, enjoy the greatest Running Man dance scene ever. The following clip is from episode 162, when the cast of Running Man each teamed up with an idol group to see who the King of the idols is. In other words, daebak: