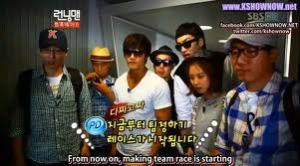 So I will assume you get the whole rip-the-name-tag setup. While the name tag chase is the staple of RM, there are several games that have come and gone over the life of the show. I will not highlight the ever changing find-the-item or complete the strange situation missions (which have included dozens of different scenarios from squirt gun fights, secret agents, finding a variety of items, etc.), but instead present some of the more memorable situations the Running Men have been thrown into, especially in the earlier episodes…

Note: One thing to consider is that in the earlier episodes of RM there was not a prize awarded for the winning team (sorry Ji Hyo, no gold) instead there was a punishment dolled out in hilariously embarrassing fashion (think a toned done version of Kenny vs. Spenny). Running Balls were handed out to team members who won, usually insuring immunity from punishment. The games below were often tied into obtaining a Running Ball and avoiding punishment at all costs.

This game used to make up most RM episodes. One team hides, one team finds (with spiffy bells attached to their feet). BH&S made the best of the large landmark locations RM is known for. A personal favorite, it is now few and far between that this game is played.

Another game played often in the earlier episodes of RM, this challenge found the Running Man cast in a crowded landmark searching for the episode’s guest. Often the guests themselves were given missions to oust the Running Man cast members before they were discovered as the guest. Add a hilarious plethora of decoys that the PD would throw in during this game and laughs were assured.

Create a small window of space to capture a picture and make ten people scramble to hit the sweet spot at the same time. Such is the photo zone game. A standard early on but still played now and then, the highlight of this game is Gary. For some reason he always shows up in the pictures with a serene look on his face- hence his nickname Peaceful Gary.

Another oldie but goody, this was a blast to watch but not really feasible as an ongoing game. One person was selected by the PD to be the target of the game while the other cast members and guests had to complete a mission without tipping of the target. Hilarity ensued…that was until every guest and CM expected the game to be played. Then it was just paranoia…which was still funny- in a weird sort of everyone is distrustful sort of way.

Back in the early episodes there was a punishment handed out to the loosing team, often something involving underwear or hot pants. For a period of time the PD allowed the RM to have a once chance mission so everyone could avoid becoming the subject of humiliation- this one chance often involved a next to impossible mission. The best use of this game was when the RM figured out the One Chance quickly and impressively- that would leave the production staff groaning and the RM laughing all the way to the next episode. 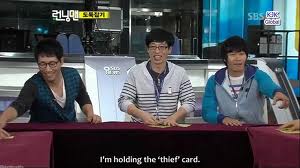 A spastic version of musical chairs, find the thief started with each cast member receiving a card. One of the cards was marked thief and acted as the hot potato that everyone wanted to avoid. Through different short games (3/6/9, Quick Wit, etc.) cards were exchanged. The person with the thief card at the end of the game found themselves devoid of the elusive running ball.

Leisure Time for a Cup of Tea

This one always got to me. It involved middle of the night games with the half asleep cast members forced to drink horrible concoctions of raw egg and similarly disgusting ingredients. Only played during the first dozen or so episodes this game was discontinued due to controversy (I was always afraid the entire cast would end up with food poisoning, yet I somehow I still laughed).