So…there are about a bigillion scientifically formulated, integrity proof, emotion proof, methods to review media. After considering about 10 of those methods (okay- I admit it. I am a little lazy. How else could I watch so much t.v.) I have come to the conclusion that all of the formulistic- segmented- statistically-fangled critical methods are not going to work for me. No…instead I have devised my own supertastic, ever sarcastic method of critiquing those stories I cannot get out of my head. Let’s play a little game of…

Hanging out with Richard Nixon and Robespierre

Huh? What the?! That does not even make sense- what does that mean? Simple- what if I had to watch said movie / show with the architect of the French Revolution and the super paranoid 37th president of the U.S.? Would I run away- suggest we watch something else? Or even worse, let them have it! Damn guillotine and Watergate! I am a firm believer that the best art brings peace, even if you are busy trying to tug the fleece back from Nixon or trying to explain to Robespierre that Louis XVI furniture is so passé. So- now it is all explained.

We rate things too-really. We use the only thing we could agree on- 10 is awesome on the level of Sholay or City Hunter and 1 is so bad you want to have amnesia so you never have to remember the hours you spent in pain. Let’s get to the ratings and reviews. Viva la Revolucion!

Henceforth is my ever growing list of reviews and ratings- I am adding as I have time. Nixon- Robespierre, coming! Sorry, such little time with my current crew. What can I say? Anushka Sharma and Ranveer Singh know how to bring it- the rom-com that is. I loved the scene where he chased the thugs off. I love the weddings and the heartbreak. Other than a great jodi this film brought a story worth watching. Not a masterpiece, not even a top ten of rom-com but still a win in my books. Even though the soundtrack had a lot to do with my love of this film.

Checking in on Nixon and Robespierre: Weddings, weddings, weddings. Is that all I have to hear about? Apparently. If I see Nixon pass Robespierre another copy of Brides magazine I will scream. Despite the cute repetitive viewing can become annoying in a hurry. I will sound like a freak- I love, love, love, love, this movie. Dhoom 2 mixed the right amount of action, romance, and comedy and delivered a funny / romantic / melodramatic(in a ha ha sort of way) look at high crime. I will love you forever Dhoom 2.

Checking in on Nixon and Robespierre: They did not utter a word. Not a word. Until the end- then we decided in tandem to nominate Dhoom 2 for movie of the millennium. Checking in on Nixon and Robespierre: Playing cricket with the architect of the French revolution and the 37th president marks a new high in my life. Go Dil Bole Hadippa! It is that good. Seriously. I usually recommend this to Bollywood newbies so they can taste the masala that is filmmaking in Mumbai. I love Raj and Simran’s relationship no matter how melodramatic it is. I love the fact he followed her back to India and insisted on an honest relationship in the face of immense opposition. Hell- I love almost everything about this movie. Good visuals, great acting, the reason SRK and Kajol are one of the most famous Jodis of Indian Cinema.

Checking in on Nixon and Robespierre: They both bought me a cowbell. And a euro-rail pass. I hugged them, we jumped with joy. And then we all declared DDLJ as the best. 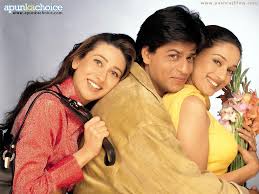 I loved the music in this tale of dance stars and muses gone awry (or is that finally found, not sure). SRK did a great job, so did Kareena. Dated but a good story of a muse and her follower. Containing a love triangle that can get sappy, but is never annoying to the point you would dislike the film for it.

Checking in on Nixon and Robespierre: We bought Dance Dance revolution. Nixon beat us. I tried to question it, and then realized it made no real sense. The same as Kareena doing a great job in this film. Ahhhh….life’s mysteries. Where would we be without them? 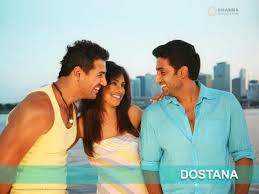 Premise: Bachnan Jr. and John Abraham as the fake gay roommates of Priyanka Chopra? Sold. After watching it- sold again. Trendy and funny, a feel good romp through modern Mumbai cinema. Heavy on the comedy, light on the melodrama. A refreshing film.

Checking in on Nixon and Robespierre: I have to admit it, they both feel slightly uncomfortable. Nixon stopped giving Robespierre hugs and Robespierre swears he no longer knits scarves for Nixon. I know better- no one else has the knitting skills to create Nixon’s new snow flake scarf. No one! Viva le revelocioun! What happens when you mix in Hrithik, Aishwayra, Spanish overtones, and a story that is more serious than 80% of modern Mumbai films? You end up with an artistic movie that may have overshot its mark at times but delivered a more thematically cohesive narrative than expected.

Checking in on Nixon and Robespierre: They gave up. I kept watching. I watched it again. Akshay and Katrina are one of my favorite pairings in Mumbai cinema. The story is nothing new, arranged marriage angst, but the actors and follow-your-destiny vibes make it a good if not great one.

Checking in on Nixon and Robespierre: They both fell asleep when they realized the film took place in Canada. Hell- I love the Canadians. Aboout time Akshay and Katrina spent some time in the kingdom of Maple Leaves. Too bad Kareena and Shahid’s romance did not follow that of their characters in this film- if it had it would have stood the test of time. Very cute moments, lot’s of funny ha-ha chemistry between the leads. Would recommend it, but not add it to my top ten.

Checking in on Nixon and Robespierre: They are confused. Why would Kareena leave Shahid? IDK….yes, I used text speak. It seemed fitting. We went to bed early after the movie finished; the only thing on our minds was the actor’s personal lives. And a train journey in India. Thank this movie for John Abraham. Thank it for nothing else- seriously. Never felt anything but the  “John and Biapasha met during this” happiness.

Checking in on Nixon and Robespierre: They both refused to watch this film- apparently with good reason. Aishwarya and Hrithik can do no wrong in my book. I consider this their second best move after Guzaarish. A historical epic with a love story-I could not ask for more. Directing was good, acting was great.

Checking in on Nixon and Robespierre: They thought it was a little boring. That was until they decided to wrestle an elephant. Now they think Hrithik is the next RoboCop / Terminator/ Superhero. Thanks Jodhaa Akbar. You cannot help your awesomeness. 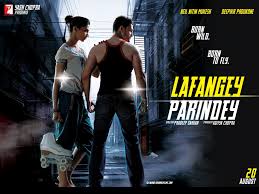 Ice castles meets Tamil’s Thulladha Manamum Thullum. Inconsistent with poorly explained plot devices. I liked the romance but could not buy the plot.

Checking in on Nixon and Robespierre: Apparently Robespierre once made a woman blind after running her over with this carriage. Ironic- yes. Enough to save this film- never. Shahid tested his acting chops with this one. An exciting ride full of moments that make you actually give a damn about the characters.

Checking in on Nixon and Robespierre: We are too busy talking about Kaminey. Check back later. Young and hip when it was released- I have to like it because Kajol and SRK star (yes, I fan-girl on this paring waaayyyy too much). Objectively, fan-girl aside, the writing and directing was just okay It was touching, funny, and poignant.

Checking in on Nixon and Robespierre: Love long gone. The one we left behind! Ohhhh…the heartbreak! I have no idea who Josette is, but apparently she is Robespierre’s Anjali. Here is hoping I get a time machine for Christmas. Kleenex are expensive. A melodramatic journey that made Sallu a star. The party scene broke my heart. Good chemistry, okay writing and directing.

Checking in on Nixon and Robespierre: They miss their wives. I miss the time before I had to watch movies with them in mind. We all sighed, a heavy regretful sigh. Then we smiled. It is nice to see happy ever after once in awhile. Loved Imran and Katrina pairing. Funny and sweet in a feel-good way. A perfect film for a lazy afternoon. Not thought provoking, simply light hearted.

Checking in on Nixon and Robespierre: When Mr. Watergate and Mr. Guillotine giggle it is funny. I giggle and then we snicker in tandem. Finally we eat cookies and make friendship bracelets. Hrithik’s character kind of freaked me out. Emotional torture in the name of love is still emotional torture. A somewhat cute take on the long distance / friend posing as friend courtship. Fun but disturbing. Nowhere near what the cast could deliver based on their past performances.

Checking in on Nixon and Robespierre: They laughed during the church scene. Sick, sick Robespierre and Nixon. Oh..Y-films, how your trendiness and youthfulness get the best of you. Good, but in a comical they tried sort of way. I admit I watched it 3 times but that was mostly because I found the lead actors adorable – not big on the lack of a plot.

Checking in on Nixon and Robespierre: Facebook you say? Trying to explain it to the architect of the reign of terror and Tricky Dick is more work than I could ever want. I told them to google Zuckerberg and called it a day. You’ll find me in the dictionary under the word lazy.

Not great, not terrible either. Some action, some boring moments. Ho-hum overall. Lots of style, missing substance.

Checking in on Nixon and Robespierre: R.D. fan club. The. End. Funny- the ending credits left me more impressed than 50% of the movie. Go Snoop! But it was an easy watch and Katrina and Akshay were fun to watch as always.

Checking in on Nixon and Robespierre: They both told me I was almost as intelligent as Akshay’s character. I threw popcorn in their faces and went back to enjoying the light comedy action. Go slapstick! 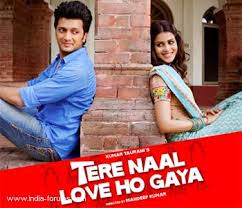 Genelia and Ritish together again? Thank you. The story was weak but the leads delivered with what they were given. If for nothing else I would recommend this because of the lead’s and their chemistry, onscreen and off. 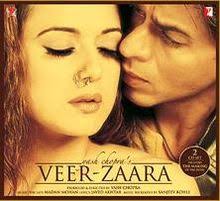 Preity Zinta did an awesome job in this film. A Romeo and Juliet story of forbidden love between a Pakistani and an Indian, a lovely take on what keeps us apart and what binds us together forever. Melodrama got the best of it at times, but overall it is worth watching.

Checking in on Nixon and Robespierre: A lot of “well they should have” sentences. Too bad I watch films with two egotistical freaks. Oh well, they have started to recognize the power of SRK. When he is on the screen they look at me, look at the screen, and then giggle. That’s okay. Love you SRK! The best arranged marriage film I have ever had the pleasure to view. They love each other- really they do. Somehow the director and writer made this into a tale of true love, despite the structured and forced relationship story line. I liked it- not Dhoom 2 liked it, but I liked it.

Checking in on Nixon and Robespierre: Sleeping. That is okay- I like watching Shahid Kapoor films alone (*blushes*).