After twenty hours of extremely unethical surgery contests, conspiracies, and love Doctor Stranger has come to an end. The SBS drama took the top Tuesday / Wednesday rating spot as it completed its final suture. There was a lot that Doctor Stranger had going for it out of the gates, and there is a lot about this show I was disappointed with. Time for a Stone Cities final review. Cheers!

For the reality of the situation read on.

I usually format my final reviews rather simply- the good and the bad. What I liked and enjoyed and what made me shake my head. Unfortunately I cannot utilize this simple layout for the final review of Doctor Stranger. Why, you ask? Simple. I want to punch this show in the face with a scalpel. Or-in more polite terms, I really ended up disliking this drama.

So my final opinion of this show?

The storyline was too big for its britches.

Doctor Stranger was at the bare bones a story of tragedy – of being an outsider, of reclaiming love when everyone around you (everyone with more power than you) has other plans for your future, of healing and moving on when the truth is revealed. Sounds interesting, right? Well, not so much. The narrative was clogged up with confusing conspiracies, poorly utilized characters, and plot-lines that dragged on and on and on. Logic was overlooked and the show broke its own story rules multiple times.

The doctors of Myungwoo University Hospital committed so many questionable acts that I found myself wondering how the whole place was not shut down. The politicians who plotted against each other never revealed a good guy (because as stupid as it sounds I was trying to hold on to one of them being good in the end). North Korean spies came in and out of a top hospital at will, and shot people. And were shot, but lived. And shot people. And then more unethical medical practices went on. And I face palmed a lot. 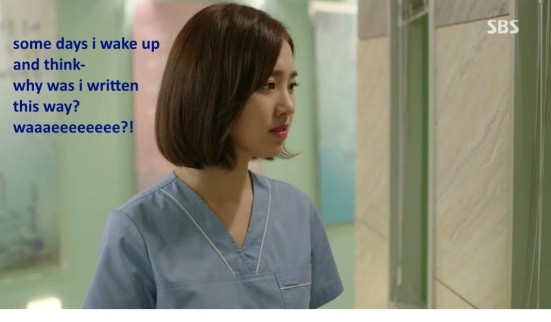 I cannot help but think that the writer wanted this show to be so much more than the original story’s intent could handle. It was like they put elements of a decent thriller, a heartwarming medical drama, and a tragic love story in a faulty blender and threw it into a bathtub full of lukewarm water. There were some sparks early on, but soon everything was killed by the pure overload. I lost faith as a viewer when mysteries made little sense, reveals made even less sense, and episode after episode hinged on characters forgetting the hard questions and flying towards the easy answers.

The story did not do the characters justice. The second leads, Jae Hoon (Park Hae Jin) and Soo Hyun (Kang Sora), were wasted. Jae Hoon had a mediocre revenge plot that was utilized for conveniences sake while Soo Hyun would have been an amazing character in a straight forward medical drama (the doctor that needed to grow, professionally and personally). The larger extended cast were fodder for the conspiracies flying back and forth and did little to really grab my attention (I have to say this- Lee Chan Yi’s character was a complete and total waste of what could have been an awesome little sister role).

Our main leads, Jae Hee (Jin Se Yeon)  and Park Hoon (Lee Jong Suk), were a mixed bag. While Hoon was the focus of our story, Jae Hee was his Achilles heel. Or at least that is what she should have been. Her identity was the first major mystery that called this show home, and the first mystery that utterly failed to produce anything other than groaning and disappointment on my end. Was the mystery doctor Jae Hee? Well, yes. Why was her identity dragged along? Tension of course. How did it matter in the end? It didn’t really because Hoon figured out who she was early on and her secret identity was nothing more than a plot device used for…um…actually there was nothing great narrative wise that came out of this mystery. Nothing but a long dragged out mystery I failed to care about.

I hate to be so negative when reviewing a show, but I can’t help it. I was really disappointed in this drama. The premise seemed promising, the cast seemed promising. It was hard to latch onto something so quickly to see it fail so miserably. If you need me I will be sipping a mojito and trying to remember happier times. Like episode 1, when I thought everything would work out in the end. *Tear*

57 thoughts on “That was painful: Doctor Stranger Series Review”