I had a weird thought the other day- what if, just what if, there was some kind of grand name tag ripping championship that was attended by each country of the world. Kind of like the Olympics, but with the games played on Running Man; wouldn’t that be phenomenally entertaining and extremely unlikely to ever occur? Yep, if you need me I will be in that corner of my brain that loops RM episodes. Just shout seumdwa if you need anything. Cheers!

Jeon Mi Seon, Moon Jung Hee, and Son Hyun Joo, the cast of the new thriller film, Hide and Seek, appear alongside our Running Man members. A preview has not been released for this episode since it was just filmed three days ago (every once in a while Running Man has wacky filming to airing schedules- like filming the week the episode airs). Because there is no preview I have no idea what this episode is going to be about. So…um…check out the preview of the movie Hide and Seek instead (there is a good chance that with the cast guesting the premise will somehow tie into the movie’s plot):

This week in Running Man news…

Lee Kwang Soo, much to the world’s surprise, does have a day job. As some of you probably know he is an actor by trade and is currently co-starring in the MBC drama Goddess of Fire, Jung Yi. All of which leads to the inevitable situation of…um…the giraffe being an actor. Apparently his costar in GOF, Yoo Jung is having a hard time keeping a straight face while filming with Kwang Soo. I can see why, I mean this guy is super awkward and hilarious when he is just standing around not saying a word. Imagine trying to act with him! Yoo Jung recently revealed the following in an interview:

“I try not to laugh when I’m with Lee Kwang Soo… To be honest, Gwang Hae (Yoo Jung’s character in the drama) was in a situation where he’s not supposed to laugh, but he [Kwang Soo] is hilarious during the rehearsal. Lee Kwang Soo comes prepared with many gestures and those gestures are really outside of the box. Seems like he prepares a lot. There are times when I watch him in amazement. I tell myself to not laugh, and continue to remind myself to not start or else [it’s hard to stop]. I’m always anticipating. I wonder what gesture he’ll prepare next for the upcoming scene.”

I can only imagine what it is like having to rehearse with Kwang Soo!

In other news, this week a curious link between two celebrities was revealed. So, what does HaHa and Sung Yuri have in common? I would initially guess not a thing but it appears that they were both born in Germany. HaHa’s family lived in Germany at the time of his birth, returning to Korea when HaHa was four. My main love of this news story is due to the accompanying baby pics of Haha as well as the following:

“Haha has mentioned this fact (German birth) on several occasions before and has even mentioned previously that his birth was mentioned in the local newspapers because of his extraordinary birth weight of 4.9kg (10lb 13oz)”

So the little penguin started life as a giant! This makes me wonder what Dream’s birth weight was. Poor Byul!

Speaking of babies/ family, Yoo Jae Suk’s wife, broadcaster Na Kyung Eun, turned in her resignation to MBC this week citing a desire to spend more time with her family. Kyung Eun and Jae Suk met on the set of Infinite Challenge, where Kyung Eun lent her voice as a broadcaster. The two married in 2008 and had their first child, a son, in 2010. I wish her well in her new endeavor as a full time family woman.

I am super excited about this next piece of news- Jung In and Jo Jung Chi are set to guest star in episode 159! I love these two on We Got Married. I fondly recall how their first episode on WGM had both of them approaching the show like it was a game based variety a la Running Man. So I find it very fitting that they will be subjected to the name tag ripping bonanza that is Running Man. Also, Jung In collaborated with and is close to LeeSsang so I am curious to see how Gary and Jung In interact during the episode (she mentions Gary and Gil on WGM quite a bit, usually while telling pretty humorous anecdotes). I am not sure what the premise of episode 159 is, but I am still super pumped for it.

The last piece of news for this week has to do with Sulli’s oops Chinese swear in episode 153. During the episode you can hear Sulli say the words “Cao ni ma” which in the mandarin language means something similar to “F your mother”. Apparently the Korean Communication Standards Commission did not think a swearing Sulli was okay and issued a warning to Running Man. The PDs of Running Man already apologized for the incident and promised to be more careful in the future. SM also release a statement on the incident, explaining that Sulli was having a discussion with the cast and crew about Chinese words- it just happened that she let one foul one loose during a moment that was not edited out. Is it wrong if I like the cast of RM more for sitting around, watching football, and discussing swear words? Probably.

After looking at HaHa’s baby pics, I had to. Just had to. 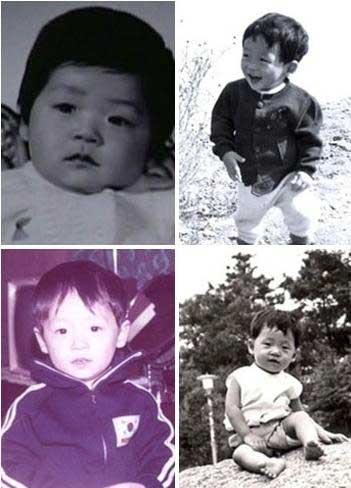 I could not find a childhood or baby pic of Gary, so um, here is Gary with a kid that looks like him! 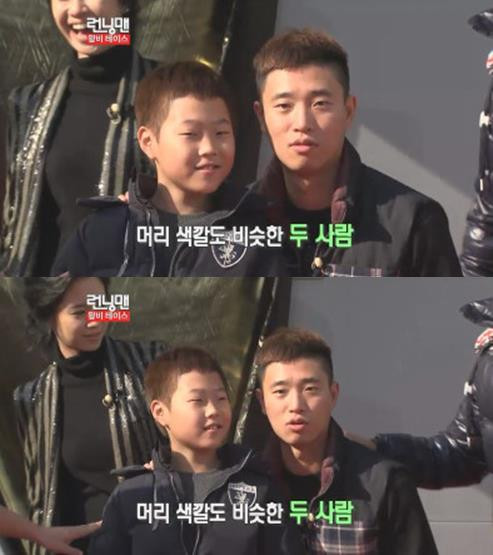