With the completion of Gu Family Book (which proved to me that absence does not make the heart grow fonder- glad you are over Gu) MBC has premiered their new Monday/Tuesday saguek Goddess of Fire, Jung Yi. GOF will air for thirty two episodes and premiered on July 1st. 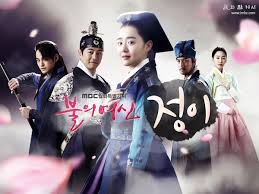 I finally found time to check out this drama and I have some major mixed feelings. Before I get into my rambling let’s look at the plot of GOF. Hint- it is something I could never, ever do…nope- not being a kindergarten teacher or cooking. Next hint- something that should not be around a bull….a matador? Probably, but still no.  Goddess of Fire is about pottery. Glorious pottery (can you tell I am a pottery fan? If so then go back to Sarcasm University, you need to retake one of your classes).

My non love of ceramic arts aside this show has what seems to be an interesting focus: the first female potter in Joseon. I love me a good story about breaking gender barriers so I was pretty interested when I first heard about this show. Did I mention Kim Bum is in Goddess of Fire? That helped me tune in too. 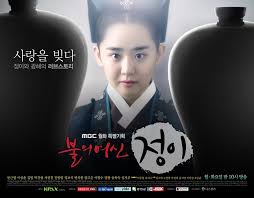 The “goddess of fire” Yoo Jung is played by the excellent actress Moon Geun Young (Jin Ji Hee plays the younger version).  The first episode of GOF introduces us to Yoo Jung’s parents. Her Mother dreamed of becoming the first female royal ceramicist in Josen however her dream was cut short once she became pregnant due to rape. The man that violated her sends guards to kill her when he learns of the pregnancy. She hides in a kiln to thwart her chasers and there she delivers her daughter alone. A violent storm occurs as she gives birth, culminating in a lightning strike to the kiln. The kiln goes on to collapse, ending her life, however her daughter is rescued by a royal ceramicist that Mom has loved all along. He promises to raise the now motherless girl. 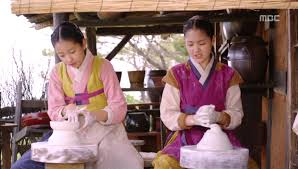 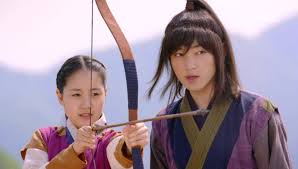 When we catch up with Yoo Jung as a young woman she is far from skilled in the world of pottery, her father makes her practice ceramics much to her disdain. Yoo Jung is a spirited and quirky girl, made obvious when she disobeys her father and runs off to catch up with a friend. That friend is Tae Do (Kim Bum, younger version Park Gun Tae). The two go out for a hunting trip in the forest and are separated when Tae Do chases after a deer. 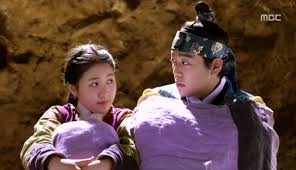 Yoo Jung, now alone, goes to check on a trap the two set only to find that a young man has fallen into the trap pit. That young man is no other than Prince Gwanghae (Lee Sang Yoon, younger version Noh Young Hak). Through a series of actions the two end up in the trap together, which leads to the inevitable meet cute.

Gwanghae has not ventured into the woods alone, however. His older brother Prince Imhae (Lee Kwang Soo, younger version Lee In Sung) is there too and determined to win at the hunting game versus his younger brother. He wanders onto a golden opportunity when he finds Tae Do with his own catch. He takes the animals for himself and frames the boy for his brother’s disappearance. 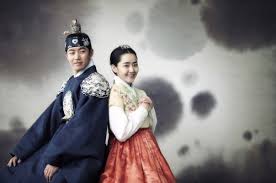 This backstory leads us into the heart of this tale: these four characters have an inevitable connection that is sure to be anything but tame as they move into the adult world. How will the two princes in their adult form interact with the spirited daughter of a ceramicist and the lowly hunter Tae Do? And how will they stay connected over time (hey this is a drama, it is inevitable)? To finish off our questions the description of this show includes the fact that Yoo Jung will be kidnapped by the Japanese and leave Joseon. What will become of her then?

I am not sure, but I do have an opinion on the first few episodes. Maybe it is because I just finished Jang Ok Jung or maybe it is because this show actually sucks but I had a huge case of the been-there-done-thats while watching the first episode. The writers definitely want to get their point across- did you know she is born to be the greatest potter of Joseon? Did you? If not we give you: 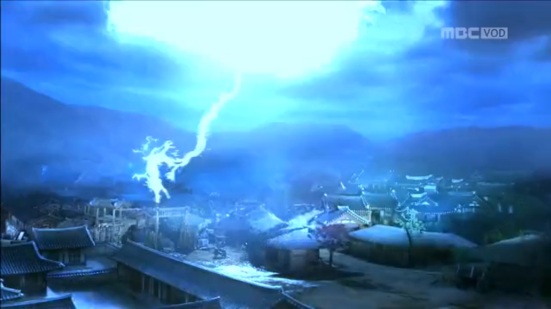 A birth in a pottery kiln…simultaneous with a lighting strike. Um…is she actually Hercules or something? Because this seems a pretty epic birth.

Oh, and a dream that shows us the girl presenting pottery to the king

I get it show. No need to keep rubbing it in my face (which is very much like what JOJ did in the early episode). So maybe I should not discount this show so soon because I ended up really liking JOJ. As of the first couple of episodes the characters are really not doing it for me, but I will hang in there. If there is one thing I am foolishly good at it is sticking by a drama until the end.

And bedsides…I am really only tuning into this drama for one reason: 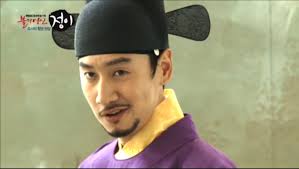 2 thoughts on “Ceramics Anyone? First Impressions of Goddess of Fire, Jung Yi”