Political intrigue abounds in this episode, complete with a his and hers guide to getting your way in the Joseon court. While some of our characters won others lost in this zero-sum game of power.

The Queen Dowager reaches a remote corner of the palace where she witnesses Jang Ok Jung have infertility medicine shoved towards her mouth. Our Queen Dowager of the Southern party watches in silence as Ok Jung grabs a dagger and threatens suicide. Ok Jung tells the Queen Mother that if the only way she can live is to become infertile and not bear the King a child she would rather die. After a tense moment of back and forth the Queen Mother realizes that having the King’s favorite concubine commit suicide in front of her is not a good situation and quickly retreats.

Jang Ok Jung stumbles back to her quarters, running into the King. Visibly disheveled and upset Ok Jung tries to tell the King that nothing happened (he does not believe her). After coming to a truce over revealing the events of the night (she will tell him when she is ready) he instructs her maid to watch her and report back to him “if even her breathing changes”. With that he is gone.

Meanwhile the father in laws (the dad of the first queen and Lord Min, In hyun’s father) band together to unite the Western party- and punish the king for ignoring both of their daughters in favor of Ok Jung. They go after the new currency that the King has introduced- claiming that it is hurting the people due to the prevalence of counterfeit coins. In response the King contacts Officer Jang who uses his position to force the other merchants to promote the new coin. 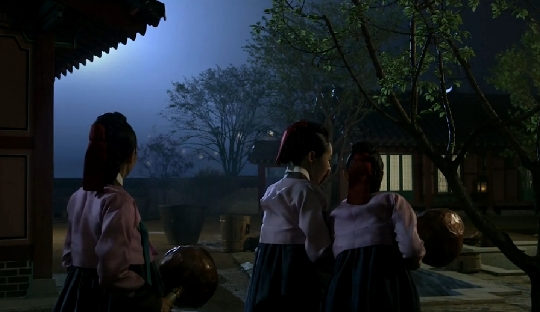 We see a scene where maids and workmen of the palace are frightened by what appears to be goblin fire- a sign of ghosts. We cut to Ok Jung and her maid discussing the sightings- the maid suggests they find a protective amulet as terrible things have been occurring as of late. 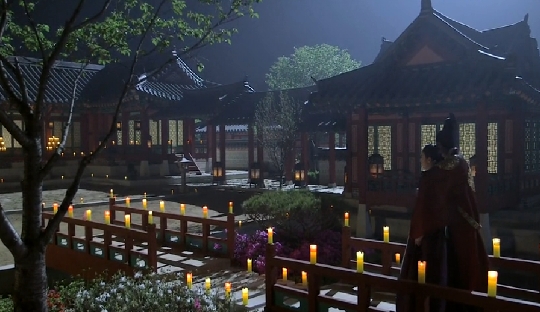 The King beckons Ok Jung to a place in the palace. Following a trail of candles Ok Jung arrives at the place that the King has built for them to quote “spend time together and have children”.  She learns that the “goblin fire” was really the workman building this place at night as to not ruin the surprise. The court retainers are not happy with the King’s gift to the court lady Ok Jung, a situation that the King rectifies by appointing Ok Jung a level four concubine.

Ok Jung arrives at the place her party is to be held, only to find the venue empty. She learns that all of the internal court servants were called to a party being held by the queen mother and instructed not to work on Ok Jung’s celebration. Boldness possesses Ok Jung and she marches to the queen mother’s party to confront the woman. They exchange words (like wench, disrespect, throw that woman out, and Ok Jung you dirty horrible person I hate you).

The King is hanging out with Uncle Prince D and announces that he will go visit Ok Jung’s party. Next, we find the monarch rushing into the Queen Mother’s steal-Ok-Jung’s-thunder party. Hearing his mother’s harsh words against Ok Jung the King grabs Ok Jung’s hand and starts to leave. The Queen Mother, already ill from her shaman ice bath a few episodes back, begins to cough up blood. The King takes up beside her sick bed where he listens to more you should kick Ok Jung out pleas.

Meanwhile the retainers, almost all of whom are from the Western Party, decide that they have enough evidence to call for Ok Jung’s dismissal (the sick queen mother and natural disasters are their rallying point). The King is infuriated. Meanwhile, Ok Jung learns of the universal blame she is receiving and goes into political plotting overdrive. She announces that she will beg for forgiveness outside of the Queen Mother’s sick house. The King realizes Ok Jung’s political play and stays out of it. 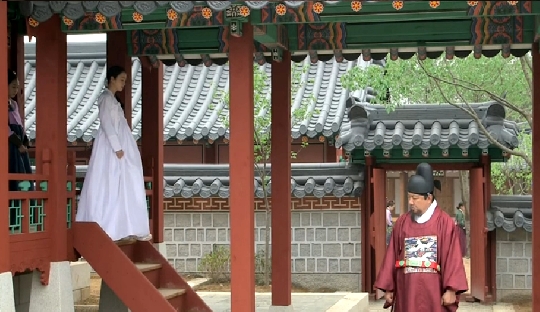 Lord Min encounters Ok Jung (on her way to beg for forgiveness). Ok Jung informs Lord Min that she will not tell the king of the attempt on her life (made by Lord Min) if he brings the retainers back and stops protesting Ok Jung’s place in the palace. Ok Jung emphasizes that if the truth is revealed, that Queen In Hyun was able to marry the King largely because Lord Min threw Ok Jung in a burning building to die, things will not bode well for the Queen’s future. Lord Min acts unfazed but as he walks away he informs Ok Jung that she should never use that card again. 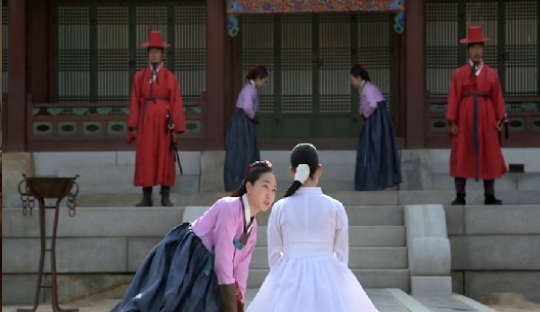 We cut to Ok Jung begging for forgiveness. She is informed that the retainers have returned and the protests have stopped- Lord Min has facilitated her demands. Ok Jung announces to the Queen Mother that the situation is over and proceeds to pray that the Queen Mother will regain her health. The Queen Mother rushes out of her sick house and confronts Ok Jung with more of the usual you-wench-I-hate-you rhetoric. As the Queen Mother lets it slip that she tried to make Ok Jung take infertility meds the King arrives. What timing! He overhears the story and then rushes to confront his mother. Jang Ok Jung begins to cry and the King angrily demands the truth from her- what happened that night?

Ok Jung’s quick thinking made this episode. Up until now she has been surrounded by plotting and scheming but done very little of it herself. When she goes to visit her uncle and gives him directions the point hits home- this girl knows how to play her cards. Yet I still am not seeing her as evil for doing so- after all we started the episode with her kidnapped. It is hard to hate someone who is adapting to survive – taking up the game that all those around her play in order to protect her own happiness. I am also enjoying this character’s dynamic with the King (aside from the lovey dovey stuff). He knows when to step back and let her have her moment in the political sun, an element which I anticipate will only get better from here on out. 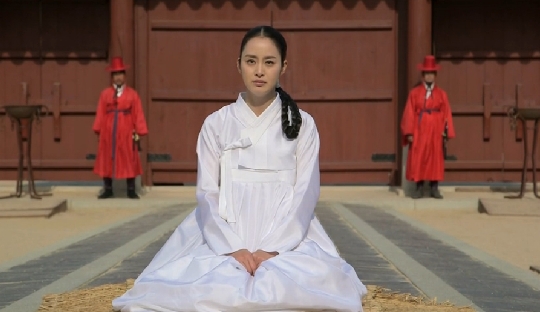 A scene that made my history nerd self fist pump: Jang Ok Jung’s maid informed her of the goblin fire and suggested they find an amulet. Jang Ok Jung is shocked at the suggestion, questioning if shamanism is allowed at the palace. The maid explains that the internal court and magic go hand in hand. This fictional conversation hints at historical fact- Ok Jung’s demise was a direct result of Shamanism (or at least that is how history records it). I feel like the show is building up to the inevitable historical episode- something that I quite honestly wanted to believe would be changed by this fictional retelling. If everyone ends up the way history tells us, without a sprinkle of drama fairy dust, I am going to be disappointed…because I could have just read the history book and been much less emotionally involved in the whole thing. But than again I guess there was some drama fairy dust in the story- I mean Ok Jung invented bulletproof armor after all. So maybe the ending won’t suck. Please be good. Please!

Something that dominated my train of thought during this episode is that Queen In Hyun‘s timid nature is disappointing. Thus far I feel like she has been a character of convenience, she is moving the plot forward but presenting a quiet and awkward sort of character that falls prey to everyone around her. I have no doubt that she will bring some intrigue as the series progresses (the historical tale tells us that) but as we are halfway through the show I am disappointed that we have seen so little of her participation in the politically charged tug of war over the King’s heart. I guess her plotting to be the queen was a huge deal so maybe she has an intrigue freebie card for a while; or at least an intrigue starting freebie card. And maybe that is the point- after all Queen In Hyun is usually the heroine of this story. Hell, I don’t know the minds of the drama gods but this episode just made her character seem like a scared mouse.

Episode twelve’s cliffhanger was not as suspenseful as episode eleven’s but it still did not fail to deliver the what-the-what-what. Will Ok Jung admit what happened that night? What will happen to the Queen Mother if she does? I will say it again, next episode why are you so far away…