Eureka! That’s right- I invented a new impossibly unscientific machine that creates unlikely scenarios for a Korean variety show. Jealous? You should be. After all, you can’t tell me what the next Infinite Challenge is, can you? Well my machine can’t either but it sure can spin some cat’s pajama’s couples (okay, just looking for any sentence I can stick cat’s pajamas in) for We Got Married.

For those who do not watch every netizen’s number one show to hate (aka MBC’s Saturday night We Got Married) this gem of Korean variety follows a pair of entertainers as they indulge in an arranged fake marriage. Weird? I know, strange concept. But damn if it is not super addicting. The awkwardness, the friendship, and the plain old voyeuristic desire to look into celebrities lives (no matter how staged) define the attraction I feel for this show.

WGM has become the show everyone loves to hate. With recent scandal and controversy in plentiful helpings there is not much love towards this program. Oh Yeon Seo and Lee Joon’s recent fake marriage ended in an awkward separation after Yeon Seo was caught in a dating scandal with a costar. Julien Kang and Se Ah are ending their unreal marriage in March after a seven month run. To top off two couples leaving, the show replaced the Yeon Seo and Lee Joon couple with an idol / actress pairing, fraught with current gossip that the actress already has a boyfriend.

The pitchforks and torches are out and many are calling for WGM to stop promoting fake relationships. Well I say, keep it up! What better time than the present? Whenever WGM mass couple changes occur Korean Celebrities cannot get enough of suggesting their role in the show. It is like naming your ideal person but with an added oomph that you know you will not have to fulfill (probably, unless you are an idol). So with all of the pseudo news about fake marriages I built a machine to take it to the next level. The WGM fake marriage-o-nator is created from anger over fake promises, the efforts to hide your boyfriend from your parents, apartments that act as studios, and hypothetical suburban fake marriage towns. Cheers.

I do. I do. Let’s see the couples created by the WGM machine:

If there is one celebrity that has proclaimed that he wants to be paired with several different people it is Defconn (seems like he changes per appearance- Park Bo Young, Rainbow’s Jaekyung, SISTAR’s Hyorin to name a few). To match such eagerness the magical WGM fake marriage machine spit out a scenario where Defconn marries the entire world. That should fulfill his fake marriage dreams. And make for the largest family reunion ever. Epic. 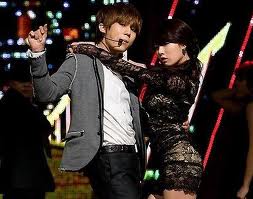 The machine has made it a condition that this couple cannot dance, citing WGM’s skin ship policy. The troublemaker couple will not receive a fake apartment and instead spend every episode alternating visits with the grandparents and learning the art of crochet. This machine has strange, strange ideas.

Okay, this is just unexpected. I know I created the WGM machine with good intentions, what is with ankle bracelets? Wait! This defines good intentions. Carry on WGM fake marriage-o-nator- you have created a match made in heaven.

The son of 1N2D’s resident pooch made the cut for WGM international edition by fake marrying a French poodle. Awwww, almost as adorable as Lee Seung Gi. Can’t wait for the fake puppies!