Yes-that is Haha and Gwang Soo groping each other- proof that this week’s version of Running Man headlines has to be awesome! Read on to learn more about Gwang Soo and his mannerly postures, an update on the injured commander, and proof of how cool Song Ji Hyo really is… 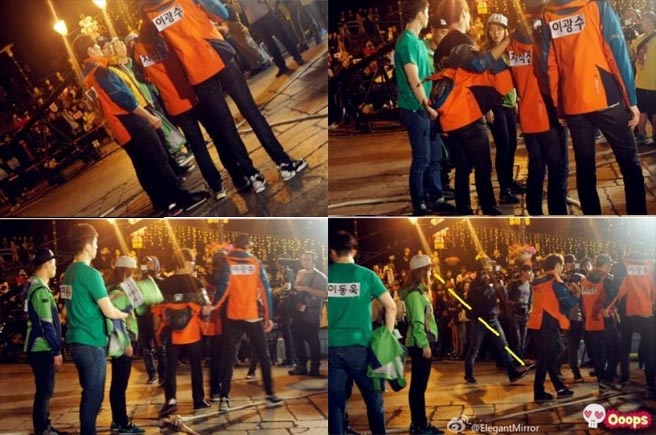 On February 4th pictures were uploaded to Weibo showing Sparta wearing a supportive boot. KJK was also photographed leaning on his fellow cast members for support.

Running Man is currently filming their multi-nation special. The pictures left fans concerned that the commander had injured his foot during filming. KJK’s agency cleared everything up in a release that stated that the injury was from exercising and that it was nothing to worry about (No?! KJK and exercise!). Insert sigh of relief and well wishes for Running Man’s tiger to recover quickly- after all the herbivores may start to get lazy.

Another story from the front lines of the Running Man international special- Ji Hyo was photographed bungee jumping from a 764 ft. tower in Macau. Yikes! She is my hero. 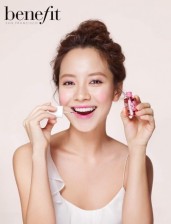 While not busy jumping off of buildings and acting kick ass our Ace became the face of the new campaign for cosmetic brand Benefit. Looking lovely sporting the latest spring makeup shades, Ji Hyo proved she is not only awesome enough to jump off a building but can become a cosmetic spokesperson with the best of them. I want to be her when I grow up.

A recent feature on Netizen Buzz was not focused on Lee Gwang Soo but still brought out two hilarious pictures of the actor to support the article’s theme of manners in Korea. While I was browsing the idol pics displaying Korean manners I stopped in my browsing tracks when I spotted the giraffe courteously widening his stance so his coordi could do her work. What a nice boy! And what a freaking tall boy- at least that is what I imagine his coordi thinks on a daily basis. Why is everything this guy does funny? 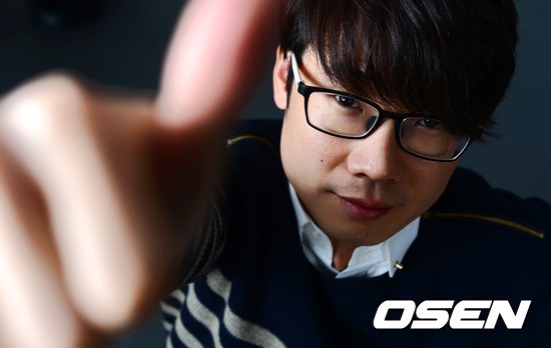 The second part of the interview with the lead producer of Running Man, Cho Hyo Jin, has been released. Henceforth are more candid answers from our PD-

In the beginning, you focused on landmarks. Why has that changed?

I felt that we were getting trapped in those landmarks while we tried to save them. For example, if we decided on a shopping mall, how many games can you build around a shopping mall? Thinking back, we had a tough time matching games to their locations. Nowadays, I feel that the places we go turns into landmarks. There’s been a few times when that’s happened; for example, I’ve heard that a museum we visited became famous after we visited it.

Characters, rather than landmarks, seem to be the primary focus now.

In a real variety program with natural settings, characters can be established pretty quickly. ‘Family Outing’ is an example of that. But with ‘Running Man’, it’s a game variety program so we have to build the settings around the game rules. So character-building didn’t come very quickly. But if we forced characters on people, the audience wouldn’t have accepted that, so we struggled early on. These days, we’ve become much more free when it comes to games and created new settings like the supernatural, so different characters were able to develop.

I’m curious about how you’re able to come up with so many games.

There’s nothing new under the sky, and we basically make small changes to existing games. Thankfully, it comes across as new. To formulate a game, the scriptwriters have idea discussions six days a week, and we happen upon new ideas by chance. Even when we come across random objects in our lives, we think of ideas and write them down. In the case of the superpowers, we went to see a superpower movie and thought ‘that could be a good idea for a story’.

The games themselves have improved, such as the spy mechanic.

I think that’s the reason why we’re able to keep the viewers’ interest despite the repeating games. But it’s very hard, since while we need to upgrade the games, we can’t make them complicated. Sometimes when we take a look back at what we’ve created, it’s too elaborate. The hardest part is balancing the difficulty. Since ‘Running Man’ caters to a wide audience, the more senior viewers and those who don’t like games need to be taken into account as well. So we make games, then simplify them. But sometimes we get greedy and wish we can do something on a bigger scale.

Do you have many backup items?

We just film as they come in. Typically, we film two episodes’ worth in one week. It’s usually too much for just one team, so sometimes we’re slotting in the final reel when the episode has already started being broadcast. We have a bigger team compared with other shows – seven scriptwriters, six producers, and more cameras – but this is what sometimes happens when we get greedy. (laughter)

It’s a shame that we can’t see more superpower episodes or rebirth episodes compared with their positive reaction.

We did many of them before, but nowadays expectations are high about these special episodes. We need to think of better ideas, and create several plans because so many things can change during filming due to many factors. It takes a lot of time, and that holds us back from doing them too often. But we do believe that larger-scale projects are good, so if the audience likes them we could look into doing more with courage. The ratings don’t really change with these specials, but the reaction is usually positive. As long as we’re trying new – and sometimes strange – things, it doesn’t matter if it gets a little childish

You don’t call guests when you film a blockbuster-level episode.

For the larger-scale episodes, the focus is on the idea or the item. Because of that, we have to plan based on the specific characters of the members, so we prefer doing it with only the members. For example, in the superpower episode, we thought of different powers that would fit well with different people. For this to be possible, we have to know the people well. Our program is honestly one of the best when it comes to guest treatment, but we usually don’t call them for these things because it lessens the pressure on the producers.

As the episodes keep coming, you’re beginning to create your own ‘Running Man’ history – like the Choi Min Soo specials.

That’s the good things about game programs, that we can do these series. If we have a series of ideas, we can connect the interesting parts, and as we begin to understand the know-how we can prepare for different situations. We can predict how well Choi Min Soo will be able to capture someone in a certain situation, and the members struggle within themselves to escape these situations.

Isn’t running that much physically taxing?

The VJs have all improved their physiques. The members also work out regularly. Yoo Jae Suk, possibly because he trains with Kim Jong Kook, has a better body than most trainers. Kim Jong Kook once offered to come to the gym with me, but I’m too scared to go.

Is there a particular special you want to do?

If we could get basketball player Michael Jordan, I’d like to plan a superpower basketball episode. Couldn’t it be possible someday

Have you ever succeeded in attracting a guest you wanted for the show?

I really wanted to invite Park Ji Sung, and that happened last year. The same happened with Son Ye Jin. In her case, it was a personally important issue for me. (laughter)

Where is one place you’d like to film in?

Croatia seems particularly beautiful. I also dream of filming a race in the desert. Foreign productions often present new sights from domestic productions, so they’re something I want. However, since they cost a lot and many things have to fall together, we can’t do it too often. We planned on going abroad once late last year, but it fell through one week before we were supposed to leave. Both luck and opportunity have to come together for a foreign filming.

What kinds of laughs does ‘Running Man’ seek to create?

Basically, we want the viewers to let go of everything and laugh in peace. On top of that, it’s a wish of mine as a producer that those laughs come from something special, possibly weird, something unique. I have fun producing ‘Running Man’ because of the reactions I receive when we broadcast something unique. I hope that the atmosphere changes in the future so that those kinds of laughter get accepted as part of the norm.

In the last seven days RM has visited Vietnam and Macau, leading to a stream of fan pictures of the cast and guests (Lee Dong Wook and Han Hye Jin).  Enjoy-