Today is Sunday, or as I refer to it as- Super Awesome Chaos Funny Running Man Day (I try to imagine each day of the week as a poorly formulated title of a yet to air Japanese game show). I know-I tend to embellish. In the spirit of overdoing it let’s celebrate everyone’s favorite floor director, Go Dong Wan, the Maknae FD of RM. Throughout Running Man history Dong Wan has appeared in wigs, dresses, and generally awesome voice over greatness. Despite several memorable appearances I have my favorites, those episodes where this FD’s demeanor and disguise made me giggle and shout huzzah with equal fervor. Henceforth are my favorite incarnations of Maknae FD Dong Wan…

The X vs. X challenge in this episode was sheer awesomeness- so much so we saw Kwang Soo invite his “model” best friend to visit him. The look on Uee’s face when the FD entered was priceless. A model?! Huzzah!

The Hong Sisters have nothing on a FD

Episode 108 focused on the romantic comedy genre, so much so that we had our very own RM version of K-Drama’s Hong sisters. Of course they would be played by our favorite Maknae FD. If I needed someone to write a drama I would probably bypass the cross dressing FD in the long run, but still find him for first for the laughs. 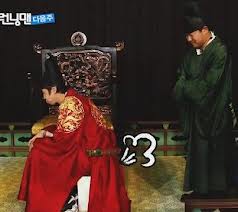 A Good King Need a Eunuch

A recent episode of RM featured our cast members acting as the ruling monarch, attended by FD Eunuch. Threatened, bullied, and always following behind, Maknae FD played his role to a tee. Plus his formal speech to the “monarch” is not to be missed.

If there was ever a question of who is the god of disguise on RM the answer should be easy. It is Maknae FD. During the 100 episode especial this was further reinforced to comedic effect. 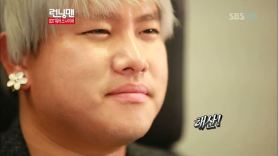 This man knows how to follow a voice over. And I kind of want to see Dong Wan and Judi Dench face off as spy masters. The. End.

One Pill Makes You Smaller

Next to the Sherlock Holmes episode the Alice in Wonderland feature was by far the strangest premise that RM has ever delved into. Throw in the FD as the white rabbit (leading us to a magical lamp with a genie Julian Kang residing within) and you have pure oddity, RM style.

2016 here FD comes! Seriously, I really hope he lights the torch. Maknae FD beats the last 5 people I have witnessed carrying that fiery thing. Which either makes me a delusional fan or a realistic human being that would rather have a wig toting funny man over an athlete- at least where world athletic championships are concerned. I will let you decide. 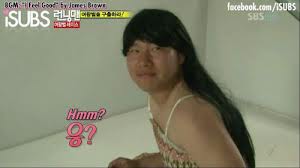 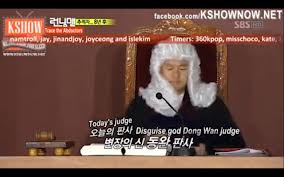 My only  hope is that this stays comedy. Because it is freaking funny. The real thing would be scary- sentenced to prison by Maknae FD scary.

I have been on multiple tours with flag toting “masters of the tour”. I have never found a guide as charismatically strange. I have high hopes that the next time I am out of the country FD Dong Wan is waiting for me, sign and flag in hand. Awww…dreams!