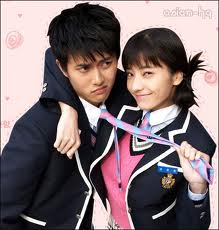 I have had way too much fun researching and writing about the origins of supernatural k-dramas to just drop my studies. Folklore enthusiasm aside (I know, I know. I try not to get any nerdier but it seems to creep up on me), it is interesting to learn of the age old tales that have inspired some of the best Korean Dramas produced to date. Let’s start by looking at the story behind a Hong Sisters classic: Delightful Girl Choon Hyang.

Delightful Girl Choon Hyang is based on Chunhyangga, the most famous of the Korean Pansori’s. A Pansori is a Korean traditional music genre that is performed by a solo singer and drummer. The Pansori tells a story that is musically enacted over a long period of time (upwards of eight hours for some folk tales). The Pansori tradition began in the Joseon era and is a representation of the musical story telling tradition in Korean culture. The full account of a tale that is performed as a Pansori is termed a Madang. Out of the twelve classic Pansori madang’s only five survive, the most popular being Chunyangga.

The origins of Chunhyangga are fuzzy; however the story is believed to be created prior to 1661. Chunhyangga is popular even to this day because of its social message; that class and status is not a hindrance to the human desire for freedom. A commentary on social structure in 17th century Korea, the story lives on in multiple adaptations to th

Chunhyangga is set in Namwon, Jeolla province. As the story goes Chunhyang is the daughter of a Kisaeng (or Gisaeng), a woman that is skilled in calligraphy, dancing, painting, music, and poetry. The Kisaeng first appeared in the Goryeo era as entertainers. Kisaeng were considered of a low social class in the Goryeo and Joseon eras, often occupying the same social sphere as slaves and butchers. The status of a person during this period of Korean history was determined upon birth, therefore the children of Kisaeng’s were considered as lowly as their mothers. Daughters of Kisaeng’s were automatically destined to follow in their mother’s footsteps; there was no personal choice when one was born of this social status.

In the Goryeo era many Kisaeng were involved in medicine as well as entertainment. They were not predominantly employed in the way many Kisaeng in Joseon were, as prostitutes. During the Goryeo era the Kisaeng set the precedence as educated females, regularly entertaining the royal court. While often considered no better than a slave, the Kisaeng received a full education.

The story behind Choon Hyang is one of the daughter of Kisaeng, a girl born into a terrible societal prison, a person who has little social movement other than to accept what is coming to here. As the tale goes Choon Hyang falls in love with the son of a magistrate, one Yi Mongryong. The story tells of Choon Hyang’s secret marriage to Yi Mongryong and their subsequent separation. Yi Mongryong leaves for Seoul after their marriage; in his absence a corrupt official tries to force Choon Hyang to become his concubine. In the knick of time Yi Mongryong returns and saves Choon Hyang, revealing his new position as a royal inspector.  Therefore Choon Hyang breaks the social restraints that have bound her from birth and happily lives as a magistrates wife.

Delightful Girl Choon Hyang adds modern elements to this Pansori.  While Choon Hyang marries Mongryong, they do so out of peer pressure and circumstance. While the official who tries to steal Choon Hyang is just as much of a baddie, Hak Do is a frightening representation of “Daddy long legs”. Choon Hyang herself is true to her role, after all the original tale of Chunhyangga is one of social opposition and freedom through breaking such class barriers. The story of Chunhyangga will likely be made into countless more dramas and films over time; a testament to the fact the Joseon story maintains its relevance to this day.

2 thoughts on “The Story Behind the Drama: Delightful Girl Choon Hyang”