Running Man, Infinite Challenge, 1 Night 2 Days, and the many similar variety programs currently airing on South Korean television are refreshingly unique for a Western viewer- a blend of reality television, shameless self promotion, and celebrity camaraderie that is missing from state side televisions. It is difficult to find a semblance of what makes up a SK Variety show in America. A hypothetical scenario for anyone unfamiliar with the SK variety format (this is as close as I can imagine such a show airing on U.S. Television):

Jerry Seinfeld MCs (rat pack style) a television show. The new episode debuts and features Seinfeld, Brad Pitt, Angelina Jolie, 50 Cent, Jimmy Fallon, and Matt Damon caring for an elderly person’s house as the home owner take a trip. After a day of cleaning, challenges (including a dance off), and fighting they end up in an epic game of hide and seek in a historic building (after they eat a traditional dish). Suddenly Justin Beiber appears as a guest. The end result is Jerry Seinfeld betraying 50 Cent, Beiber, Damon, Fallon, and Brad Pitt in order to tear off Angelina Jolie’s name tag, therefore winning the game and a small pile of gold. The end. Preview for next week’s episode- Beyonce, Britney Spears, and Lady Gaga guest star in a hilarious race through the streets of Brooklyn. 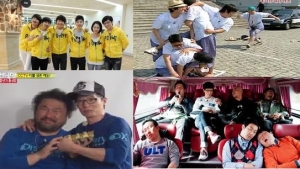 Korean Variety shows hinge on cultural relevance and star power. They also hinge on the unexpected- the reality variety blend. So why do I believe this format is not adaptable to U.S. television? I have two central reasons for my stance; firstly the overdose of reality shows in America has left an unfortunate precedence. Secondly South Korean celebrity is a different animal than that of the Hollywood Celebrity.

Variety shows in the U.S. are historically entertainment programs and do not fit the Korean variety format. The closest thing to SK variety is our reality shows.

Reality Show. How I cringe at the words. It brings up mental images of the Osbournes, The Hills, The worst part of Survivor, and every terrible premise that replaced that show I liked. U.S. reality television premiered in the 1940s (believe it or not) with Allen Funt’s classic Candid Camera. In the late 40s and early 50s reality shows blended with comedic hijinks in the closest thing American television has produced to SK Variety: shows like Truth or Consequences and Beat the Clock delivered celebrity humor and clever stunts. In the 1960s reality television morphed into documentaries of everyday life, evolving in the next three decades into police shows, thoughtful portraits of rural America, and a multitude of game shows. In 2000 Survivor premiered and the rest is history.

The standard set by Survivor is a powerful format. The everyday man in a contest with only one winner. Add onto that the format perfected by The Osbornes. A celebrity family and everyday life, repeated over and over again. Layer that with the friendship show (a la the Hills or Real World), add a sprinkle of the b-list celebrity parade and the audition bonanza and you have a perfect recipe for every U.S. reality show in the last 12 years. This precedence has left American culture devoid of an opportunity for a good old fashioned, A-list celebrity show that gives us humor and camaraderie in equal doses (I give props to The Marriage Ref for coming the closest). With the most celebrity centric show out there Dancing with the Stars, a program full of cast members that only border on the definition of celebrity, we are devoid of the type of start studded power that is Korean Variety. However I cannot blame the creators of such shows or the stars themselves for this void. Why would an A-list celebrity appear on reality television? After all, what type of good publicity would this give them? With the standard set by shows like Big Brother and Survivor there is little to be gained by a star such as Tom Hanks deciding to appear on a survival show. 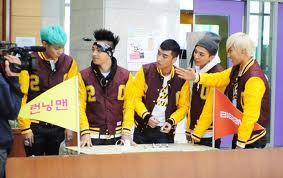 So, why in South Korea is such publicity good for a star? Because the structure of South Korean celebrity allows it- in other words it is because celebrity in South Korea is largely under a star system, the same type of methodical control of image experienced in Hollywood up until the mid 1960s. Stars are “owned” by the entertainment companies they sign with and are upheld to an image that they negotiate with said company (or accept from said company). The golden age of Hollywood was full of studio controlled promotions and tightly spun star personas. Talent scouts would hunt down potential actors and actresses in soda shops, Broadway plays, and vaudeville acts. After a name change and intense etiquette, speech, and performance training they would debut, their entire entertainment legacy signed away to the studio that scouted them. Such is the life of many a celebrity in Korea, especially those that originate in the K-pop world. Therefore it is the entertainment companies that can set the precedence for publicity, and with their decision to promote their stars on variety programs the cycle of image making continues. With big stars appearing on such shows weekly there is never a question of “Well is this a b-list show?” The variety shows are created for the A-list and set the stage for future guests.

Current State Side Celebrities, both in the music world and acting world, no longer fall under the tight control of their entertainment agencies. While still playing the publicity scene, actors and musicians have freedom unheard of during the star system days. This matters in relation to the scenario of a reality television due to: the history of b-list stars on reality TV, the ability for stars to promote in ways that are not controlled by the studio (such as the studio favoring a reality show and also having a celebrity under contract), and the overall economic structure of the entertainment industry in the U.S. vs. South Korea (in practice many U.S. celebrities make more than SK celebrities due to revenue gross).

In conclusion it is a shame that the format of reality variety is not present in American television. Korean variety programs are a big hit in their native land and abroad, humorous celebrity filled jaunts for the entire family. The more SK Variety programs I view the more I wish I would see something similar on one of the big U.S. networks. Unfortunately I doubt this will happen, yet I really, really, really hope that I will someday be proven wrong.